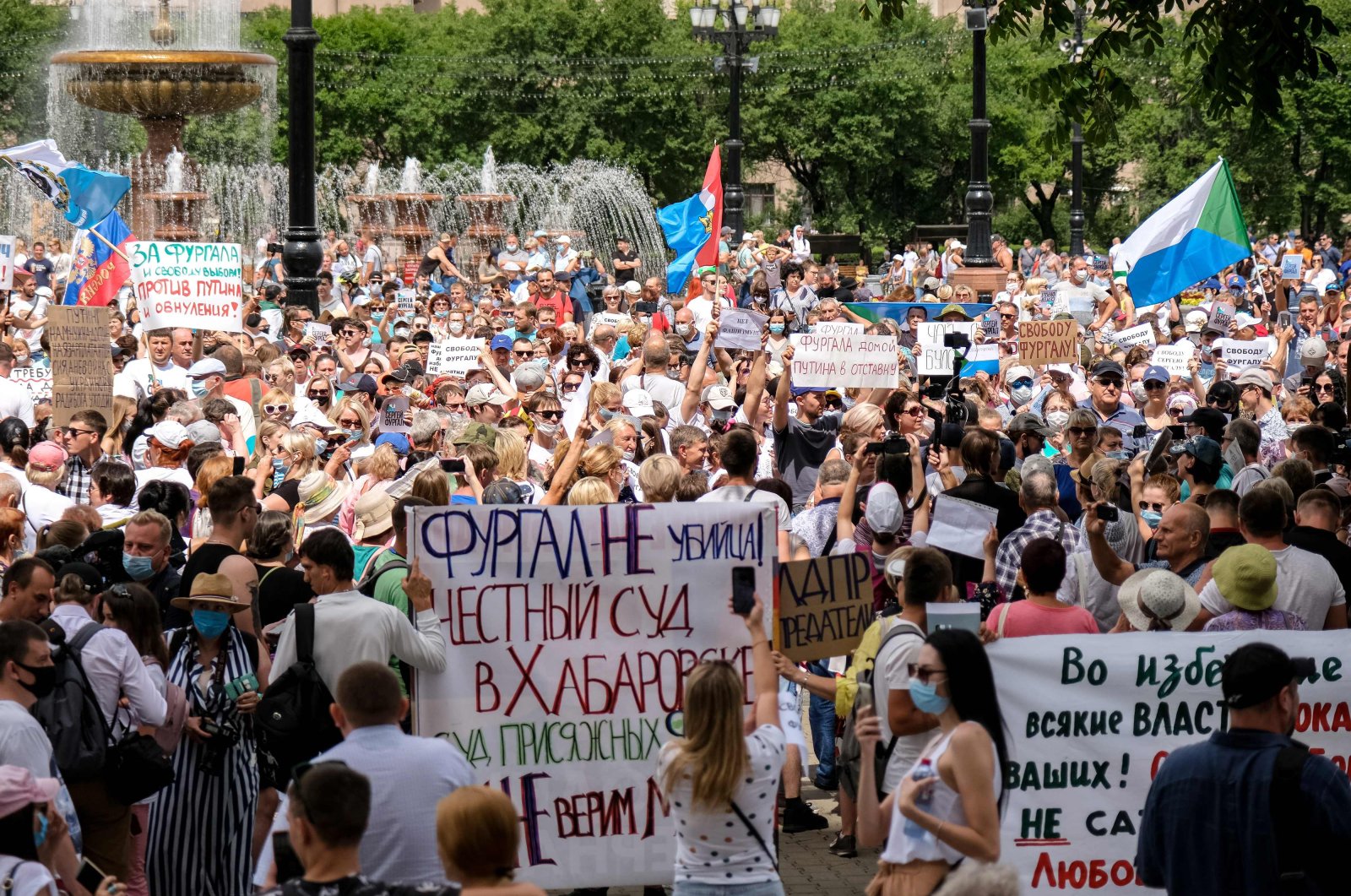 People hold banners and signs during a rally in support of Sergei Furgal, the governor of the Khabarovsk region who was arrested, in Khabarovsk, Russia, July 25, 2020. (AFP Photo)
by French Press Agency - AFP
Jul 25, 2020 11:09 am

Huge anti-government demonstrations erupted in Russia's Far East on Saturday over the arrest of a popular governor who was replaced this week by a Kremlin appointee who never lived in the fraught region.

Residents of Khabarovsk near the border with China have taken to the streets en masse since the head of their region Sergei Furgal was arrested by federal law enforcement and flown to Moscow on murder charges earlier this month.

The running demonstrations have been some of the largest anti-government protests in Russia in years, which the Kremlin said this week were being fueled by opposition activists outside of the region.

Police wearing masks allowed the demonstrations to go ahead despite a ban on public gatherings as part of measures to contain the coronavirus pandemic.

Estimates of the turnout varied greatly, with Khabarovsk officials saying that 6,500 people attended. Pro-opposition social media channels placed the number much higher at around 90,000.

Authorities say at least 10,000 people took part in previous demonstrations on July 11 and July 18, though some local media and opposition figures put the figure at 35,000 to 50,000 people or more.

Journalists reporting from the town seven time zones east of Moscow said Saturday's rally was the largest since the demonstrations began this month.

The move was met with anger from Khabarovsk residents who said the 39-year-old outsider lacked experience and had no connection to the region.

In a video posted to Instagram this week, Degtyarev dismissed calls for him to step down and said the mass demonstrations did not reflect broader public opinion.

Ahead of the demonstrations on Friday he suggested that foreign citizens had flown from Moscow to Khabarovsk to help organize the protests.

Kremlin spokesperson Dmitry Peskov dismissed claims of foreign interference but said the protests were a "nutrient ... for troublemakers" and pseudo-opposition activists.

Opposition leader and one-time presidential hopeful Alexei Navalny has thrown his weight behind the protesters and this week said the demonstrations could only win concessions "with the support of the entire country."

Furgal's detention ahead of a trial in September sparked an outcry from his nationalist LDPR party whose firebrand leader Vladimir Zhirinovsky this week vowed to secure a presidential pardon if he is found guilty of the charges.

Russia's Investigative Committee, which probes major crimes, said Furgal was charged with ordering the murders and attempted murders of several businessmen in 2004 and 2005.

Critics say the case is politically motivated after Furgal was elected with a large majority in 2018 in an embarrassing defeat for a candidate of the ruling party backed by Putin.

They have demanded that Furgal face the charges in Khabarovsk and question why investigators waited so long to accuse an official who should have undergone background checks.