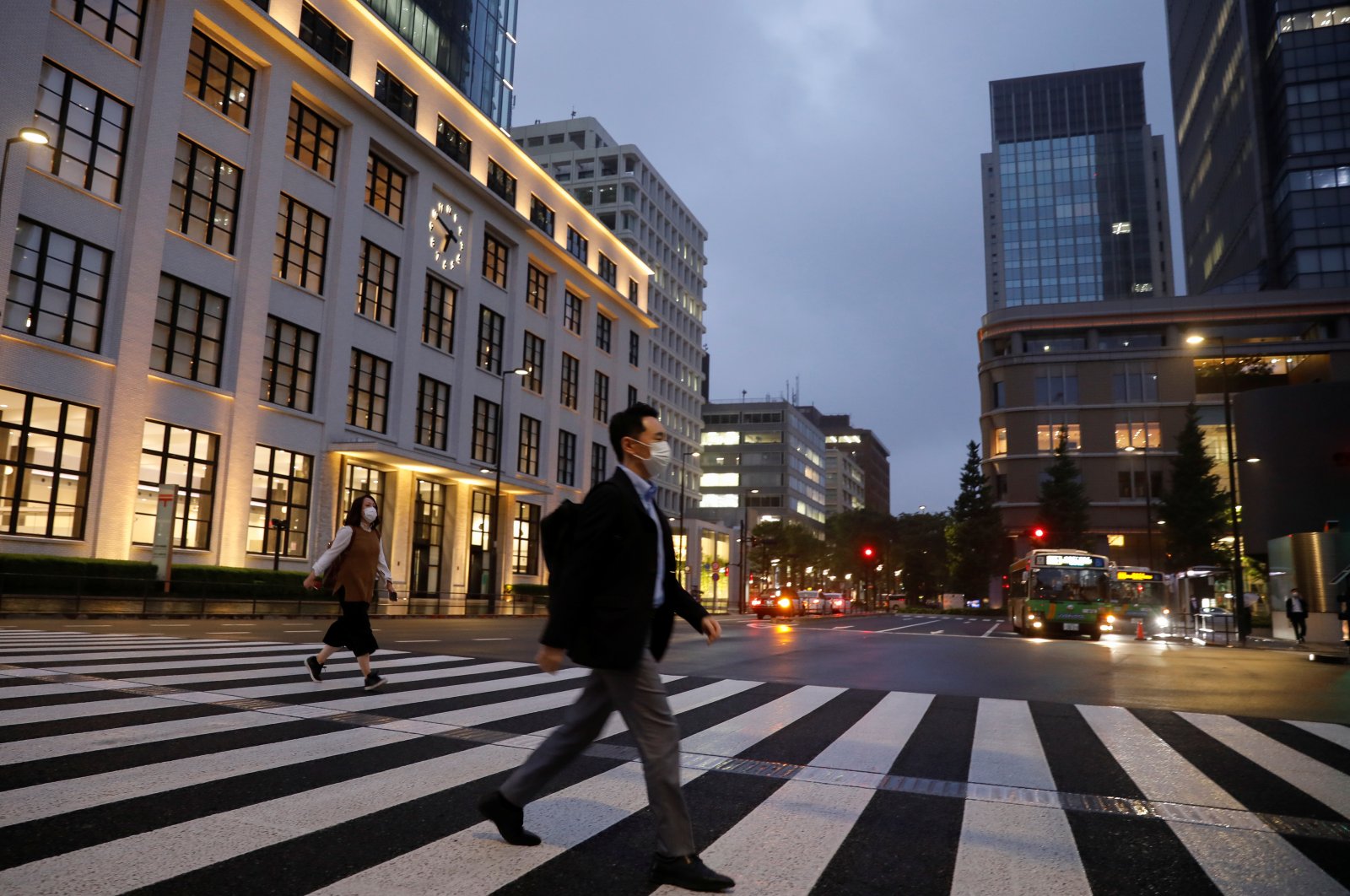 A pedestrian wearing a protective face mask crosses a street, amid the coronavirus outbreak, in the business district in Tokyo, Japan, May 21, 2020. (Reuters Photo)
by Agencies May 21, 2020 1:56 pm
RECOMMENDED

A top Japanese prosecutor seen as close to Prime Minister Shinzo Abe submitted his resignation Thursday after a magazine reported he gambled on mahjong, thereby evading a stay-at-home order issued in light of the country's battle with the coronavirus.

The scandal, involving Hiromu Kurokawa, head of the Tokyo High Prosecutors' Office, surfaced Wednesday after the popular weekly magazine Shukan Bunshun said he had played mahjong at the home of a newspaper reporter twice in May.

Justice Minister Masako Mori told reporters that Korokawa was reprimanded after an investigation confirmed the allegations against him. Kurokawa submitted his resignation, which will be formally approved by the Cabinet on Friday, Mori said.

Playing mahjong for money, as head of the high prosecutors' office, is "extremely inappropriate and regrettable,” Mori said.

With few exceptions, gambling is illegal in Japan. Evading a stay-at-home request, however, is not.

Kurokawa is at the center of a highly controversial bill pushed by Abe’s ruling Liberal Democratic Party that seeks to extend the mandatory retirement age of public prosecutors while allowing the Cabinet to influence their appointment.

In January, Abe’s Cabinet delayed Kurokawa’s scheduled February retirement by altering the interpretation of the law, the first-ever extension of a prosecutor’s retirement. Opponents have said the extension is meant to keep Kurokawa so that he can replace the current prosecutor-general who is set to retire this summer.

Abe decided to withdraw the bill after a storm of protests on social networks criticizing his government for interfering with democracy. Artists and celebrities who rarely make political statements have joined in, focusing more public attention on the issue. The opponents also criticized Abe's government for spending on such a bill when it should be working on support measures for those who have lost jobs or income under the state of emergency.

Former prosecutors also came forward to demand the Justice Ministry throw out the bill that would allow political influence over them, shaking their neutrality and public trust.

Abe has consistently denied any favoritism or personal ties with Kurokawa.

Later Thursday, Abe said he had taken public criticism of the bill seriously, stating: "It is indispensable that we listen to people's opinions."

The unpopular bill and the gambling scandal could deal a further setback for Abe, whose support ratings have fallen below 40% as the public has been increasingly displeased with his economic support amid the coronavirus pandemic as too little and too slow.

Tokyo has been under a coronavirus emergency, with people requested to stay home and keep social distancing.

However, Abe said Thursday Japan may lift the state of emergency in Tokyo as early as next week if new coronavirus infections remain low.

After ending its state of emergency in Osaka, Kyoto and Hyogo following a drop in the number of infections, Abe said that Tokyo and four other prefectures including the northern island of Hokkaido will stay under restrictions for now.

But a week after stay-at-home recommendations were lifted for much of the country, Abe said that Japan's capital city and its surrounding prefectures were showing promising signs that the rate of infections is coming under control.

"We will meet with experts (Monday) to update the situation on infections," Abe told reporters.

"If the current situation continues, it is possible that the state of emergency could be lifted in those areas."

Getting greater Tokyo, which accounts for about one-third of Japan's gross domestic product (GDP), back on its feet is vital to the country's overall economic recovery.

Unlike many other countries, Japan has not suffered an explosive surge in infections, with 16,433 confirmed cases including 784 deaths as of Thursday morning, according to public broadcaster NHK.

But the outbreak and restrictions on activity and business under the state of emergency have already tipped the economy into recession. Abe, like other world leaders, has been striving to balance the need to contain the pathogen's spread with the need to keep the economy running.

So far, the western prefectures of Kyoto, Osaka, and Hyogo are averaging at 0.09 infections per 100,000 people, in contrast with 0.59 for Tokyo and surrounding areas and 0.69 for the northern island of Hokkaido, where the emergency also remains intact.

"I believe it is safe to lift the state of emergency in Kyoto, Osaka, and Hyogo given that the number of new infections in recent days are under 0.5 cases per 100,000 people and medical services are under control," Economy Minister Yasutoshi Nishimura earlier told a panel of experts, who signed off on the change.

Osaka has recently seen no new cases, while 11 new infections were confirmed in Tokyo on Thursday.

"I am for the lifting of the state of emergency in the Kansai (western Japan) area. It is expected that the number of cases will grow again soon. But, I bet (and hope) people can manage the spread better next time even without the emergency declaration," said Yuki Furuse, a Kyoto University professor working with the government's coronavirus experts group.

Japan's low rate of testing for the virus means the scope of the outbreak may be underestimated, other experts have said.

Abe announced a week ago that the blanket state of emergency instated across Japan last month would be lifted in most places.