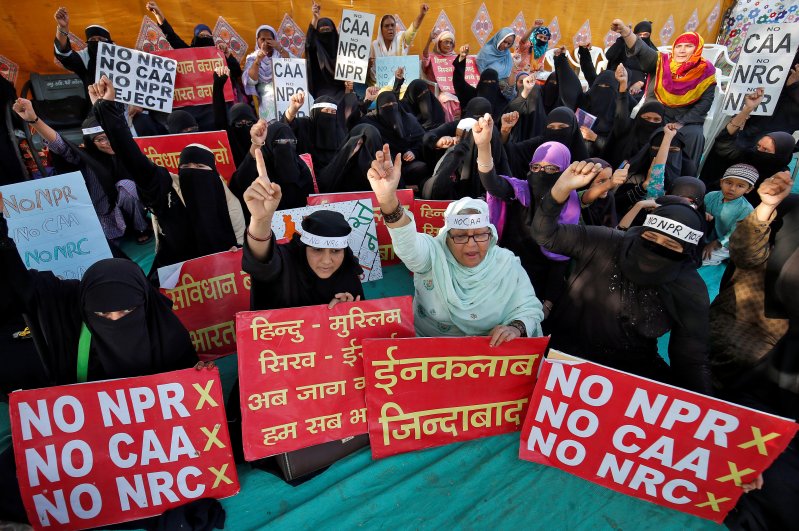 Demonstrators shout slogans during a protest against a new citizenship law, Ahmedabad, March 3, 2020. (REUTERS Photo)
by Daily Sabah with AA Mar 04, 2020 11:54 am
RECOMMENDED

The U.N. rights chief sought to join efforts challenging the anti-Muslim citizenship law in India’s highest court, after mounting international criticism for failing to protect minority Muslims. Responding to the U.N. move, the Ministry of External Affairs in India, issued a statement, calling the issue of citizenship amendment law "an internal matter.”

"The High Commissioner seeks to intervene as amicus curiae (third party) in this case, by virtue of her mandate to inter alia protect and promote all human rights and to conduct necessary advocacy in that regard, established pursuant to the United Nations General Assembly resolution 48/141," the application said.

In December, the U.N. human rights office condemned the Citizenship Amendment Act (CAA) for being “fundamentally discriminatory in nature.”

The Indian capital, New Delhi witnessed the killing of Muslims and the arson of mosques by Hindu mobs during days of violent riots last week. The sectarian violence came as a result of the government’s ongoing anti-Muslim policies. As more than 30 people were killed in New Delhi’s streets, there is fear and anger among Muslims as to why they were punished while prudent Hindus are astonished as they are aware that the sectarian escalation may lead to unwanted results.

Revocation of the special status of Jammu and Kashmir, the anti-Muslim citizenship law and the building of detention camps for Bengalis in Assam are the first steps of the current Indian government to create a purified India based on Hindu identity.