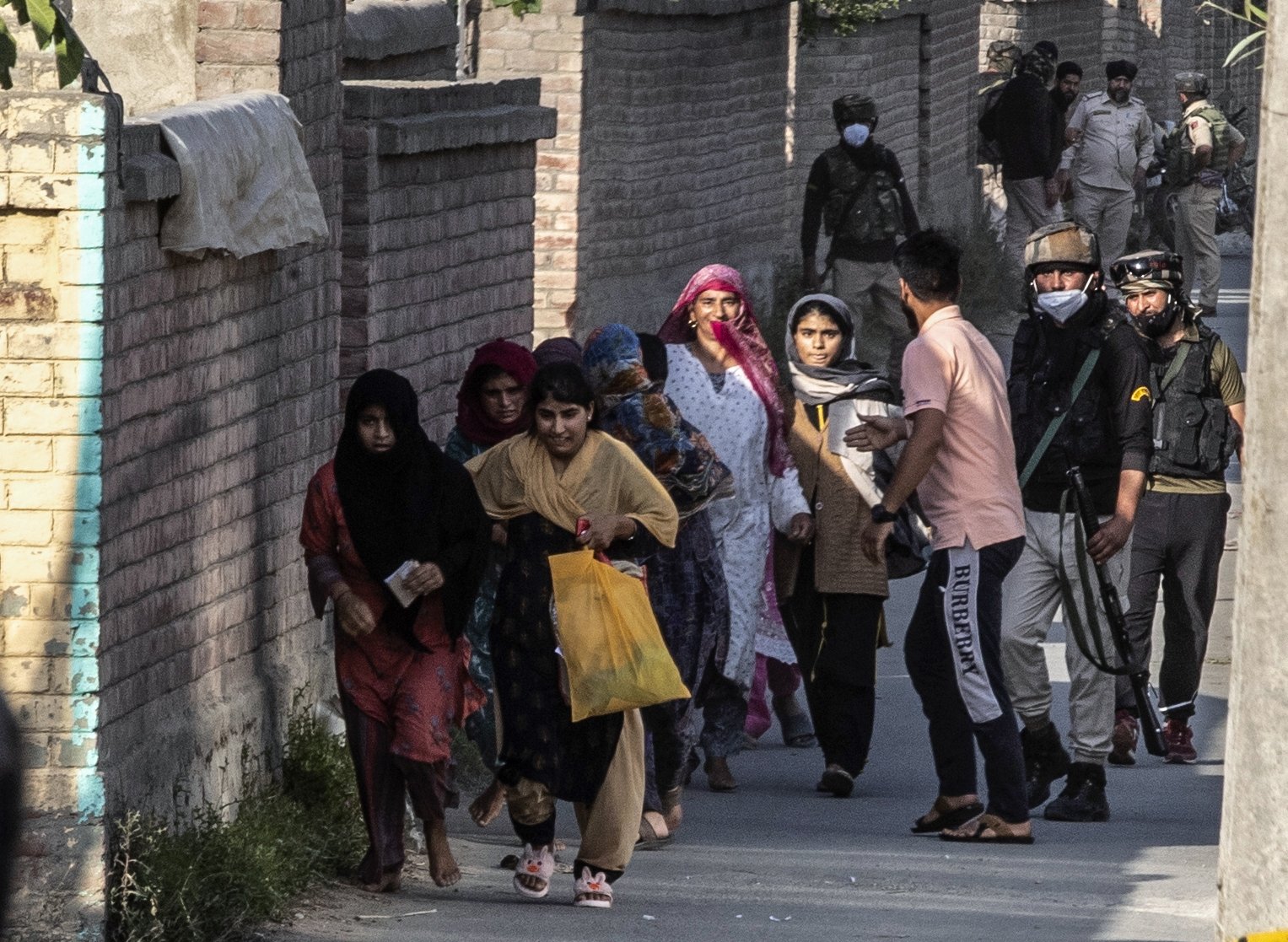 Kashmiri women and children rush for safer places near the site of a gun battle between security forces and suspected rebels on the outskirts of Srinagar, Indian-controlled Kashmir, June 28, 2021. (AP Photo)
by Anadolu Agency
Jun 30, 2021 3:13 pm

United Nations Secretary-General Antonio Guterres said Tuesday that he is concerned by grave violations in Jammu and Kashmir and asked the Indian government to end the use of shotgun pellets against children.

"I call upon the government to take preventive measures to protect children, including by ending the use of pellets against children, ensuring that children are not associated in any way to security forces, and endorsing the Safe Schools Declaration and the Vancouver Principles," he said in the U.N. Report on Children 2021.

The report noted that four children were detained by Indian forces in Jammu and Kashmir for alleged association with armed groups.

"I am alarmed at the detention and torture of children and concerned by the military use of schools," Guterres noted.

The U.N. chief said he welcomed the positive engagement of the government with his special representative to implement national preventive and accountability measures for all grave violations.

"I urge the (Indian) Government to ensure that children are detained as a measure of last resort and for the shortest appropriate period of time, and to prevent all forms of ill-treatment in detention," he said. "I also urge the (Indian) Government to ensure the implementation of the Juvenile Justice (Care and Protection of Children) Act, 2015, to address the use of children for illegal activities and the situation of detained children.”

Indian paramilitary forces and police have extensively used shotgun pellets to subdue pro-freedom protesters, most of whom often are young men and teens. During mass uprisings in 2016, more than 1,100 people were partially or fully blinded, in what was characterized by many as the "world's first mass blinding." Many victims are children, some as young as 19-month-old Heeba, who was injured while sitting in her mother's lap in November 2018 in a southern Kashmir village.

The disputed territory Kashmir, a Muslim-majority Himalayan region, is held in two parts by India and Pakistan but claimed by both in full. A small sliver of Kashmir is also held by China. Since they were partitioned in 1947, New Delhi and Islamabad have fought three wars – in 1948, 1965 and 1971 – two of them concerning Kashmir. In addition, at the Siachen glacier in northern Kashmir, Indian and Pakistani troops have fought intermittently since 1984.

A cease-fire took effect in 2003. Some Kashmiri groups in Jammu and Kashmir have been fighting Indian rule for independence, or unification with neighboring Pakistan. According to several human rights organizations, thousands have reportedly been killed in the conflict since 1989.