Outrage after India accused of portraying false image of Kashmir 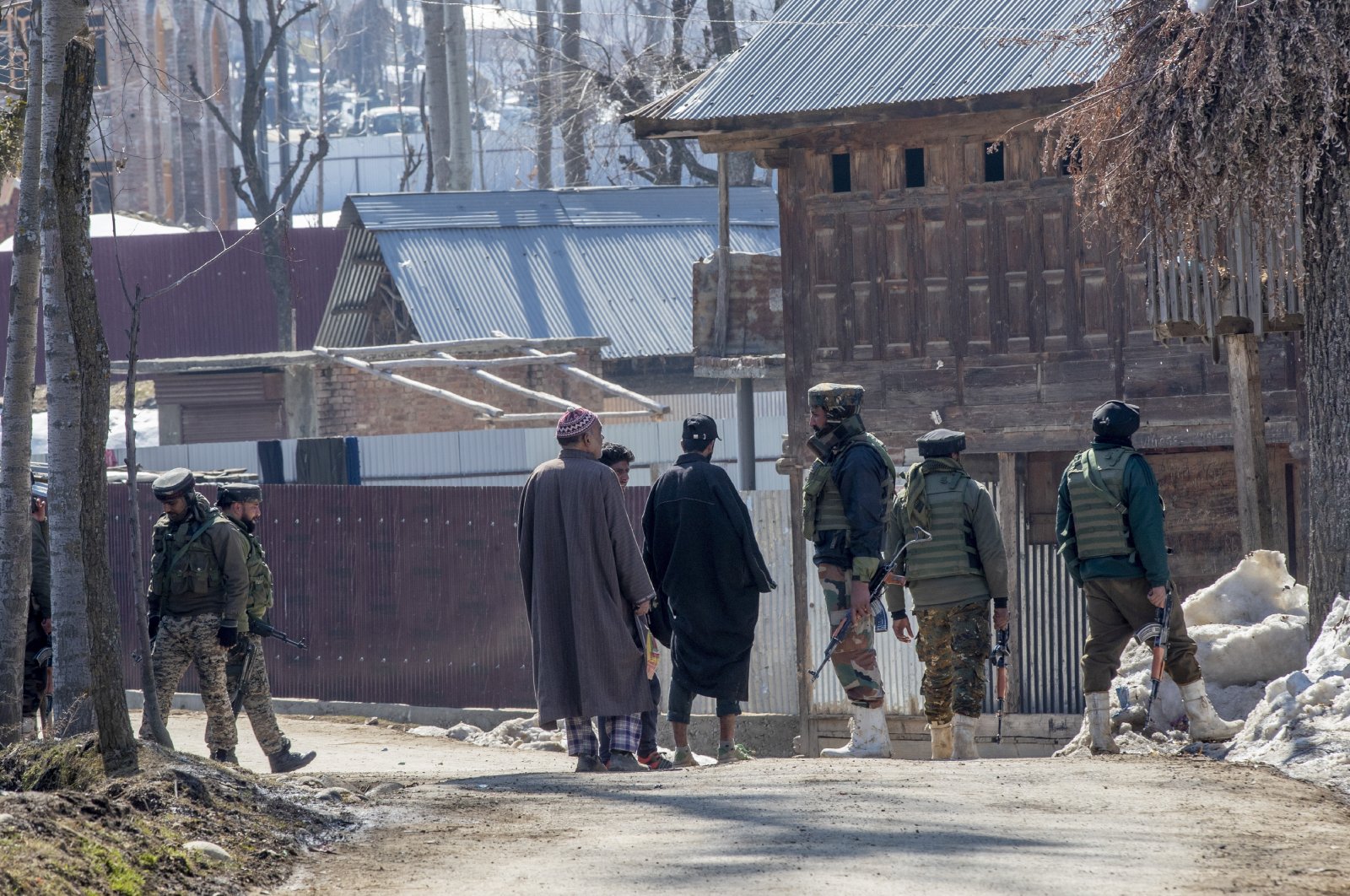 Indian authorities faced harsh criticism for failed attempts to create a nonexistent image of normalcy in the disputed Kashmir region during a two-day visit of foreign envoys, who in the aftermath denounced New Delhi for systematical discrimination against Muslims

India has failed the mission it set for itself before the visit of diplomats from nearly two dozen countries, who arrived on a two-day visit in Indian-controlled Jammu and Kashmir this week. New Delhi's goal was to present the situation in Kashmir as normal and blame the opposition for all the troubles in the region. However, all its efforts were in vain as prominent rights organizations alongside U.N. rights experts accused the Indian government of adopting laws and policies that systematically discriminate against Muslims and stigmatize critics of the government.

After the visit to Kashmir, U.N. rights experts expressed concern about constitutional changes made in the Muslim-majority territory, where rebels have been fighting for independence for three decades, and said the officials lacked neutrality.

Two special rapporteurs on minority issues and freedom of religion or belief said in a statement on Thursday that the Indian government's decision last year to end Jammu and Kashmir state's autonomy and enact new laws could curtail the political participation of Muslims.

Muslims and other minority groups also stood to lose on issues such as employment and land ownership, Reuters reported.

"The loss of autonomy and the imposition of direct rule by the Government of New Delhi suggest the people of Jammu and Kashmir as no longer have their own government and have lost power to legislate or amend laws in the region to ensure the protection of their rights as minorities," said Fernand de Varennes, the special rapporteur on minority issues and Ahmed Shaheed, the special rapporteur on freedom of religion or belief.

The experts said in a joint statement that the "number of successful applicants for domicile certificates that appear to be from outside Jammu and Kashmir raises concerns about demographic change on a linguistic, religious and ethnic basis is already underway."

The president of Jammu and Kashmir on Thursday denounced New Delhi, terming a recent "guided tour" for foreign diplomats as an attempt by India to "project a false image of normalcy" in the disputed territory. President Masood Khan criticized what he called "India's stage-managed" visit of a group of Delhi-based envoys to the "Indian-occupied Jammu and Kashmir."

"Kashmir is burning and India has vainly tried to project an image of normalcy in the territory," Khan, president of Pakistan-administered Jammu and Kashmir, also called Azad Kashmir, said in a statement.

India flew a group of foreign envoys to Jammu and Kashmir on Wednesday for a two-day trip – the third such visit of foreign envoys since Aug. 5, 2019, when New Delhi scrapped the Himalayan valley's semiautonomous status and enforced the change with a harsh crackdown that for a time included a complete communications blackout.

While parts of Kashmir remained shut in protest, the dignitaries were taken on Wednesday to a government college in the Budgam district, as well as to the holy Muslim shrine in Hazratbal.

"The visit is a farce because the envoys know the bitter truth about the occupied valley," Khan said, adding: "They went out of sheer courtesy."

"Their presence in selected and 'sanitized locations' of Srinagar will not underwrite the occupation authority's crimes against humanity being committed with impunity in the territory," the president said.

Khan asserted that the event was a "totally stage-managed event," adding that "envoys are not stupid; they knew what was being hidden under a thick pall of tyranny."

The visiting envoys also met with an elected group of civil society members, business leaders and pro-India journalists and politicians in the evening. However, many senior journalists representing both foreign and local media were not invited to the "interaction." Before the visit, the authorities concerned removed military bunkers manned by Indian armed forces and paramilitary soldiers in Srinagar and its outskirts.

"No access was given to common Kashmiris to meet the visiting envoys," Khan said, criticizing the international community's silence on alleged human rights violations in the region.

"The Indian fascism – Hindutva – is threatening the stability of South Asia," he warned. "Unfortunately, the authors and custodians of the world, ... have started either backtracking from their commitments to protect human rights or soft-pedaling them because of political expediency leading to glaring double standards," the president lamented, according to remarks carried by Anadolu Agency (AA).

Meanwhile, the New York-based Human Rights Watch (HRW) on Friday accused New Delhi of adopting laws and policies that "systematically discriminate against Muslims and stigmatize critics of the government."

HRW's report came days ahead of Feb. 23, which marks the first anniversary of the violence in New Delhi, where 53 people were killed, 40 of them were Muslims. The violence came after protests started against India's Citizenship Amendment Act (CAA), passed in 2019, that excludes Muslims.

The law granted citizenship to at least six minorities from Afghanistan, Bangladesh and Pakistan who had immigrated to India before Dec. 31, 2014.

"Instead of conducting a credible and impartial investigation, including into allegations that (the ruling Bharatiya Janata Party) BJP leaders incited violence and police officials were complicit in attacks, the authorities have targeted activists and protest organizers," the report said.

"The authorities have lately responded to another mass protest, this time by farmers, by vilifying minority Sikh protesters and opening investigations into their alleged affiliation with separatist groups," it added.

According to AA, BJP spokesperson Syed Shahnawaz Hussain declined to comment on the HRW Report 2021, saying, "I have not seen the report."

Prime Minister Narendra Modi's BJP "has not only failed to protect Muslims and other minorities from attacks but is providing political patronage and cover for bigotry," said HRW South Asia Director Meenakshi Ganguly.

Although violence in New Delhi followed peaceful protests by Indians of all faiths, BJP leaders "attempted to discredit protesters, particularly Muslims, by accusing them of conspiring against national interests."

Also mentioning the protests of farmers against new farm laws in November, HRW accused the BJP leaders, their supporters on social media and the pro-government media of blaming the Sikhs, another religious minority.

"Following violent clashes on Jan. 26 between the police and protesting farmers who broke through police barricades to enter Delhi, the authorities filed baseless criminal cases against journalists, ordered the internet to be shut down at multiple sites and ordered Twitter to block nearly 1,200 accounts, including of journalists and news organizations, some of which Twitter later restored," it said.

Since Modi came to power in 2014, various legislative and other actions have been taken, legitimizing discrimination against religious minorities and enabling violent Hindu nationalism, HRW said.

"These actions violate domestic law and India's obligations under international human rights law that prohibits discrimination based on race, ethnicity or religion, and require the governments to provide residents with equal protection of the law," HRW said.

"The Indian government is also obligated to protect religious and other minority populations, and to fully and fairly prosecute those responsible for discrimination and violence against them," it added.

Kavita Krishnan, an activist and secretary of the All India Progressive Women's Association, said in response to the HRW report: "It is an acknowledgment of what is happening in India. I have no doubt that the government is targeting minorities and speaking the language of bigotry every day."

"There are a number of such cases that we see on a daily basis where Muslims, Sikhs and Christians are targeted," she said, blaming Modi's BJP government.

"In the last six years, it has increased exponentially under the Modi government. It is very much state-sponsored and the latest one is the interfaith marriage, which has made a marriage of Hindu woman with Muslim and Christian very difficult," she said.

Pakistan and India have a history of bitter relations. The two neighbors have fought two of their three wars over the territory. Most Kashmiris support uniting the territory, either under Pakistani rule or as an independent country. Rebels in the region have been fighting against Indian rule since 1989.

Pakistan and India routinely accuse each other of unprovoked attacks along the tense Kashmir frontier in violation of a 2003 cease-fire agreement. Pakistan says India has violated the truce more than 2,000 times in 2020 alone.