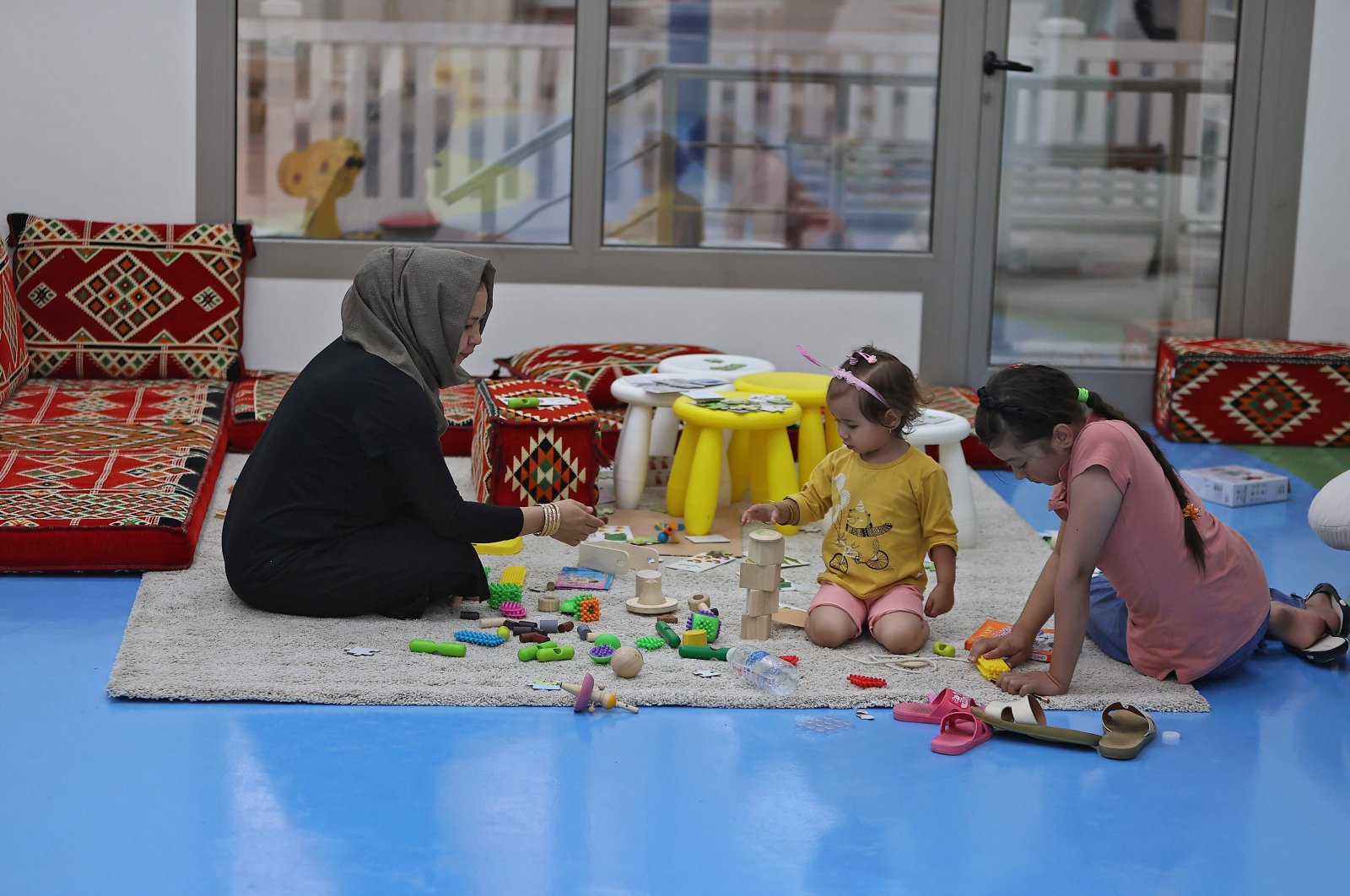 Unaccompanied Afghan refugee children transported to Qatar are facing an uncertain future as they try to overcome the trauma they have endured.

About 200 uprooted young Afghans arrived in Doha aboard flights from Kabul in recent weeks and are being hosted at a reception center, where they are grappling with the trauma of their ordeal.

They are now being cared for by Qatar Charity, a humanitarian organization that has sought to protect and keep them out of the reach of human traffickers.

Officials are picking a path for the future of the children who have adopted new routines, such as playing football, exercising and enjoying arts and crafts.

"It's very hard to imagine the trauma that they've been through," said an aid worker who declined to be named.

"All of them are in a state of shock and trauma, similar to what we've seen in places like Iraq or Syria with kids who have lived in (Daesh) areas."

The Taliban's shock takeover rekindled fears among Afghanistan's people of a return to the hardline rule between 1996 and 2001, which was marked by public executions, floggings and amputations for misdemeanors.

Many fled, including the youngsters, some of whom cannot recall the circumstances of their abrupt departure from their homeland, while others give contradictory accounts of how they came to be in Qatar.

According to the U.N. children's agency UNICEF, around 300 unaccompanied children were evacuated from Afghanistan to Qatar, Germany and other countries after Aug. 14.

Questions are swirling about how they came to be at Kabul's airport and then embark on planes bound for Qatar, and drastically different lives, but answers are in short supply.

The U.S. Embassy in Doha did not comment on the specifics of the children's cases.

A French police officer who was present at the Kabul airport gates described seeing a woman "desperately throw her baby into the barbed wire toward the French special forces, who recovered and handed the child to American medics."

"The baby was treated and evacuated to Doha. He was really tiny. His mother just disappeared into the crowd," he added.

The officer witnessed other dramatic scenes.

"One man arrived at the gate with three young children who he passed off as his own. They were orphans, he probably used them to get the gate open, but they were also evacuated.

"Stories like that highlight the chaos. They'll be part of the history of this fiasco."

Qatar Charity and other agencies are now taking care of the group, who are mostly aged between eight and 17 years old, with the youngest housed at a separate facility.

In Doha, children were settled at accommodations, to which AFP was not granted access, and grouped by age or family group if they arrived together.

As far as possible they were also grouped according to the friendships and bonds forged during their respective journeys.

"They can get attached to other children very quickly. They feel things stronger than anyone," Fatima-Zahra Bakkari, a Moroccan in charge of international cooperation for Qatar Charity.

She singled out two children, aged 12 and 13, who had become inseparable in just over a week.

When the older child learned that they were soon to move on, he offered to move out of the younger child's bedroom so they could prepare for possibly never seeing one another again.

"We all cry a lot," Bakkari said about the aid workers. "We laugh a lot too," she added, recounting the occasional child waking up to "steal" a bag of potato chips.

Despite their homely surroundings, the youngsters still face uncertainty.

"We tell them the time will come, we don't know when, but it will come," for them to move on, said Bakkari.

Children separated from their parents are "among the most vulnerable children in the world," according to Henrietta Fore, head of UNICEF.

"It is vital that they are quickly identified and kept safe during family tracing and reunification processes."

"Then comes the delicate part," said the humanitarian official who requested anonymity.

"The best-case scenario is we manage to find first-degree relatives, a grandmother, an aunt, an uncle. But in many cases, we might not be able to do that."

Qatar Charity has set up a hotline for the children to call their relatives, but for those with no one to call, their carers will need to ensure they are looked after in the long term.

"Then eventually the child can integrate in a safe community so they are equipped with the things they need to become a normal adult," the aid worker added.