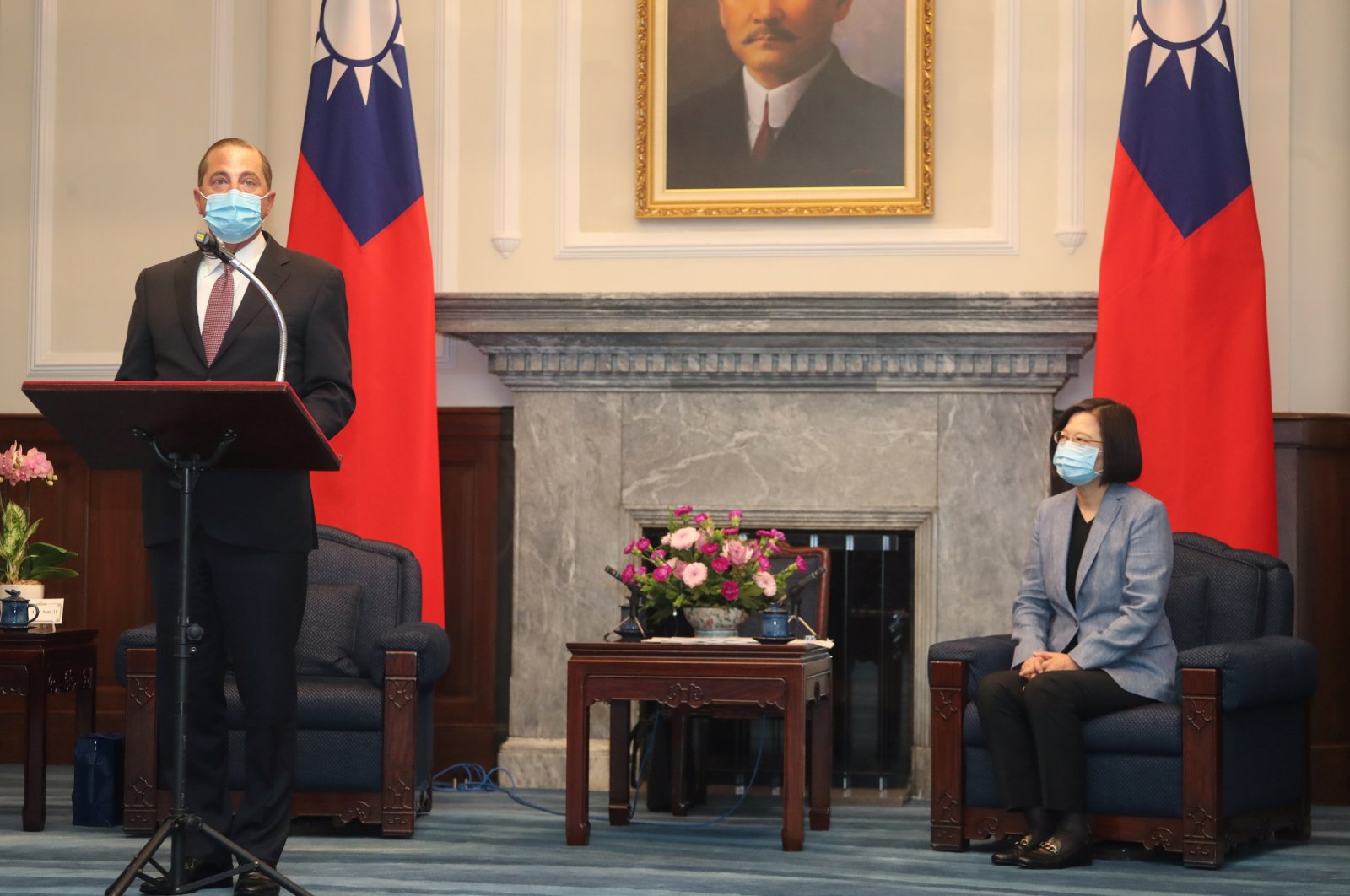 U.S. Health and Human Services Secretary Alex Azar met with Taiwanese President Tsai Ing-wen on Monday during the highest-level visit by an American Cabinet official since the break in formal diplomatic ties between Washington and Taipei in 1979.

The visit comes amid mounting tensions between Washington and Beijing, which claims Taiwan as its own territory to be annexed by force if necessary.

From the South China Sea to TikTok, Hong Kong and trade, China and the U.S. find themselves at loggerheads just months ahead of the American presidential election. In a throwback to the Cold War, the two ordered tit-for-tat closures of consulates in Houston and Chengdu and rhetorical sniping is now a daily occurrence.

Tsai said to reporters at the Presidential Office Building that she looked for “even more breakthroughs and fruits of cooperation“ in dealing with the coronavirus pandemic and other issues to “jointly contribute to the sustained peaceful development of the Indo-Pacific region.”

Azar praised Taiwan’s response to COVID-19 and said its success was a tribute to the “open, transparent, democratic nature of Taiwan’s society and culture.”

“It’s a true honor to be here to convey a message of strong support and friendship from President Trump to Taiwan,” Azar said.

He also claimed that any U.S. vaccine or treatment for COVID-19 would be shared fairly with the rest of the world, once the U.S. need has been satisfied.

There are more than 200 COVID-19 vaccine candidates in development around the world, including more than 20 in human clinical trials. U.S.

President Donald Trump has vowed to have a shot ready before year's end, though they typically take several years to develop and test for safety and effectiveness.

"Our first priority of course is to develop and produce enough quantity of safe and effective FDA-approved vaccines and therapeutics for use in the United States," Azar told reporters while on a visit to Taiwan.

"But we anticipate having capacity that, once those needs are satisfied, those products would be available in the world community according to fair and equitable distributions that we would consult in the international community on."

Beijing has protested Azar’s visit as a betrayal of U.S. commitments not to have official contact with the island that China claims as its own territory and threatens to use force to bring under its control.

Azar’s visit was facilitated by the 2018 passage of the Taiwan Travel Act, which encouraged Washington to send higher-level officials to Taiwan after decades during which such contacts were rare.

China cut contacts with Tsai over her refusal to recognize China’s claim to the island and has brought increasing diplomatic, economic and military pressure against her, including by poaching away several of its remaining diplomatic allies and excluding it from international gatherings including the World Health Assembly.

That, in turn, has increased already considerable bipartisan sympathy for Taipei in Washington and prompted new measures to strengthen governmental and military ties.

Closer relations come as Washington is enmeshed in a series of disputes with Beijing over trade, technology, the South China Sea and Beijing’s crackdown on opposition voices in Hong Kong.

Taiwan, an island of 23 million people, moved swiftly and aggressively to contain COVID-19 and has recorded just 277 cases and seven deaths from the illness.