US, India to sign key defense pact on satellite data in bid to isolate China 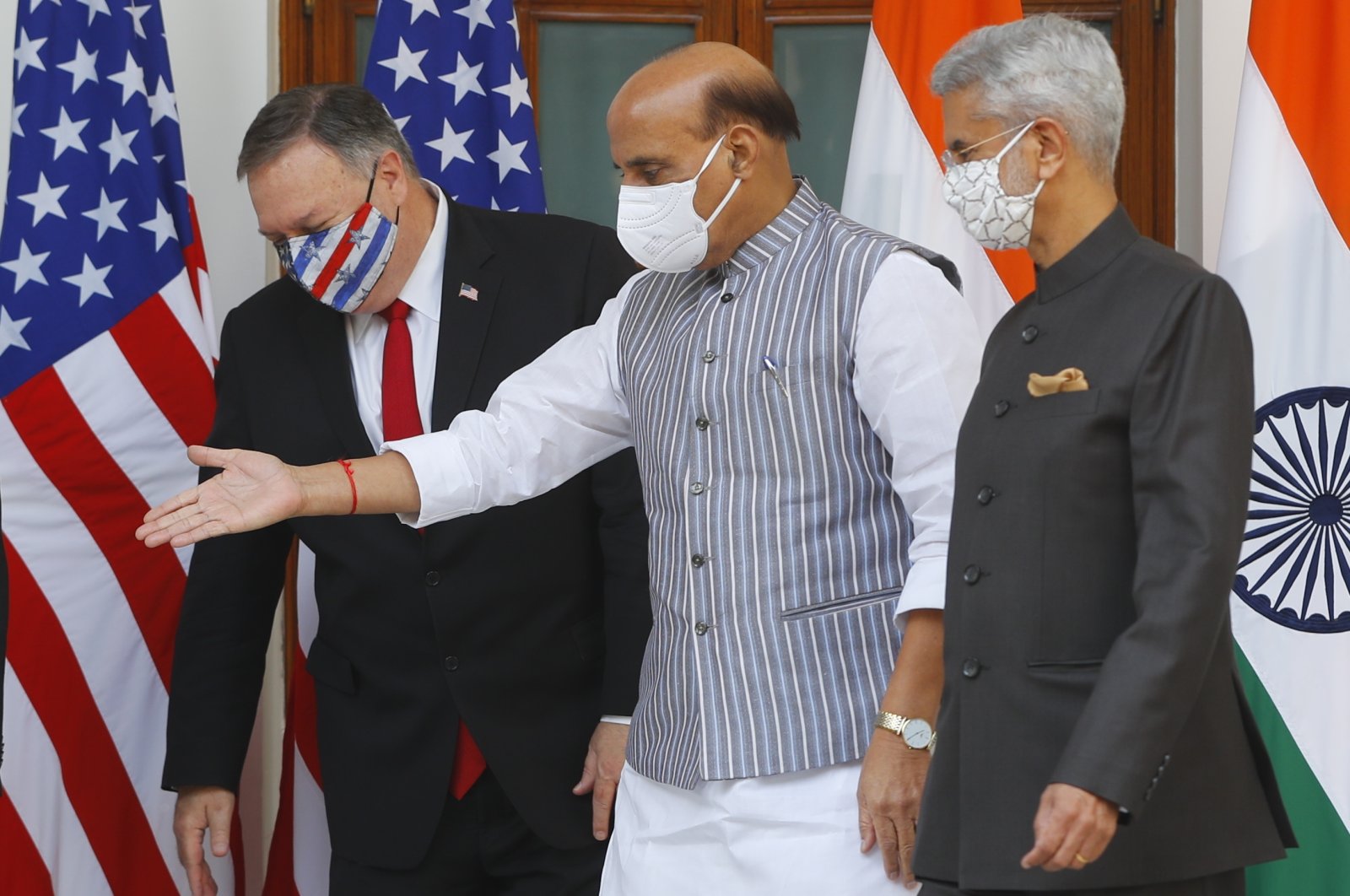 India and the United States are set to sign a key agreement on sharing satellite data for military purposes during a meeting of top defense and foreign policy officials Tuesday.

U.S. Secretary of State Mike Pompeo and defense chief Mark Esper are holding a dialogue with their Indian counterparts Subrahmanyam Jaishankar and Rajnath Singh aimed at enhancing defense and strategic ties as well as to drive the Trump administration's anti-China message exactly a week ahead of America's presidential election.

With President Donald Trump in a tight race for a second term against former Vice President Joe Biden, Pompeo and Esper are seeking to play on Indian suspicions about China support a regional front against China's increasing assertiveness in the Indo-Pacific region.

The agreement will expand military satellite information sharing and highlight strategic cooperation between Washington and New Delhi while vying for China's position.

"Today is a new opportunity for two great democracies like ours to grow closer," Pompeo said at the start of the "2+2" meeting, the third between India and the U.S. in the past three years. "There is much more work to do for sure. We have a lot to discuss today: our cooperation on the pandemic that originated in Wuhan, to confronting the Chinese Communist Party's threats to security and freedom to promoting peace and stability throughout the region."

Esper did not refer to China specifically in his opening remarks but said the two countries' focus must now "be on institutionalizing and regularizing our cooperation to meet the challenges of the day and uphold the principles of a free and open Indo-Pacific well into the future."

Just hours before the meetings began, the Trump administration notified Congress of plans for a $2.37 billion sale of Harpoon missile systems to Taiwan – the second major arms sale in two weeks to the island that Beijing regards as a renegade province. China reacted to the first sale by announcing sanctions on U.S. defense contractors, according to The Associated Press (AP).

Shortly before the Harpoon sale was announced, late Monday Pompeo met India's Foreign Minister S. Jaishankar to applaud "the strong partnership between the United States and India" declaring it "critical to the security and prosperity of both countries, the Indo-Pacific region, and the world," the State Department said in a statement.

Regardless of the U.S. domestic uncertainty over the elections, it is a critical time for the U.S.-India relationship as China looms large over the Indo-Pacific.

Heightened border tensions between New Delhi and Beijing have only added to the Chinese-American animosity that has been fueled by disputes over COVID-19, trade, technology, Taiwan, Tibet, Hong Kong, human rights and disputes between China and its smaller neighbors in the South China Sea.

Meanwhile, India is looking to emerge from its shell of internal issues, including unrest in the divided Himalayan region of Kashmir, as it faces twin threats from China and Pakistan.

Tuesday's meetings come during a flareup of military tensions between India and China in a disputed mountainous region where tens of thousands of soldiers have been engaged in a standoff since May. Trump has offered to help defuse tensions but neither side has shown any indication of interest in the offer. India and China fought a monthlong war over the region at the height of the Cuban Missile Crisis in the fall of 1962 and some fear a similar confrontation before the coming winter sets in.

Pompeo has made no secret of the Trump administration's desire to see India help in the U.S. bid to isolate China. Since Trump became president, the U.S. and India have steadily ramped up their military relationship and when Trump visited India in February, the two sides concluded defense deals worth over $3 billion. Bilateral defense trade has increased from near zero in 2008 to $15 billion in 2019.

The talks in New Delhi on Tuesday follow a meeting that Pompeo had earlier this month in Tokyo with his counterparts from India, Japan and Australia, which together make up the four Indo-Pacific nations known as "the Quad." The Quad is seen as a counterweight to China, who critics say is flexing its military muscle throughout the region.

Pompeo will head back to Washington by way of Sri Lanka, the Maldives and Indonesia during which he plans to press each nation to push back on Chinese assertiveness. He's also expected to raise human rights issues at each stop.

The Basic Exchange and Cooperation Agreement for Geo-Spatial Cooperation (BECA) will serve as one of three foundational agreements between the two countries for sharing sensitive information and sophisticated military hardware. The agreement would give India access to U.S. data systems like high-quality GPS and real-time data that would enhance the efficiency of military equipment acquired from the U.S., including missiles and aircraft,

"The two ministers expressed satisfaction that agreement of BECA will be signed during the visit," said an Indian Defence Ministry statement after Esper and Singh held a one-on-one meeting Monday.

The U.S. State Department in a pre-visit briefing said the discussions will focus on global cooperation, pandemic response, challenges in the Indo-Pacific and defense and security cooperation. There has been increasing defense cooperation between India and the U.S. in recent years, with both wary of China's aggressive posture in the Asia-Pacific region.

The U.S. has sold India more than 20 billion dollars worth of military equipment since 2007.