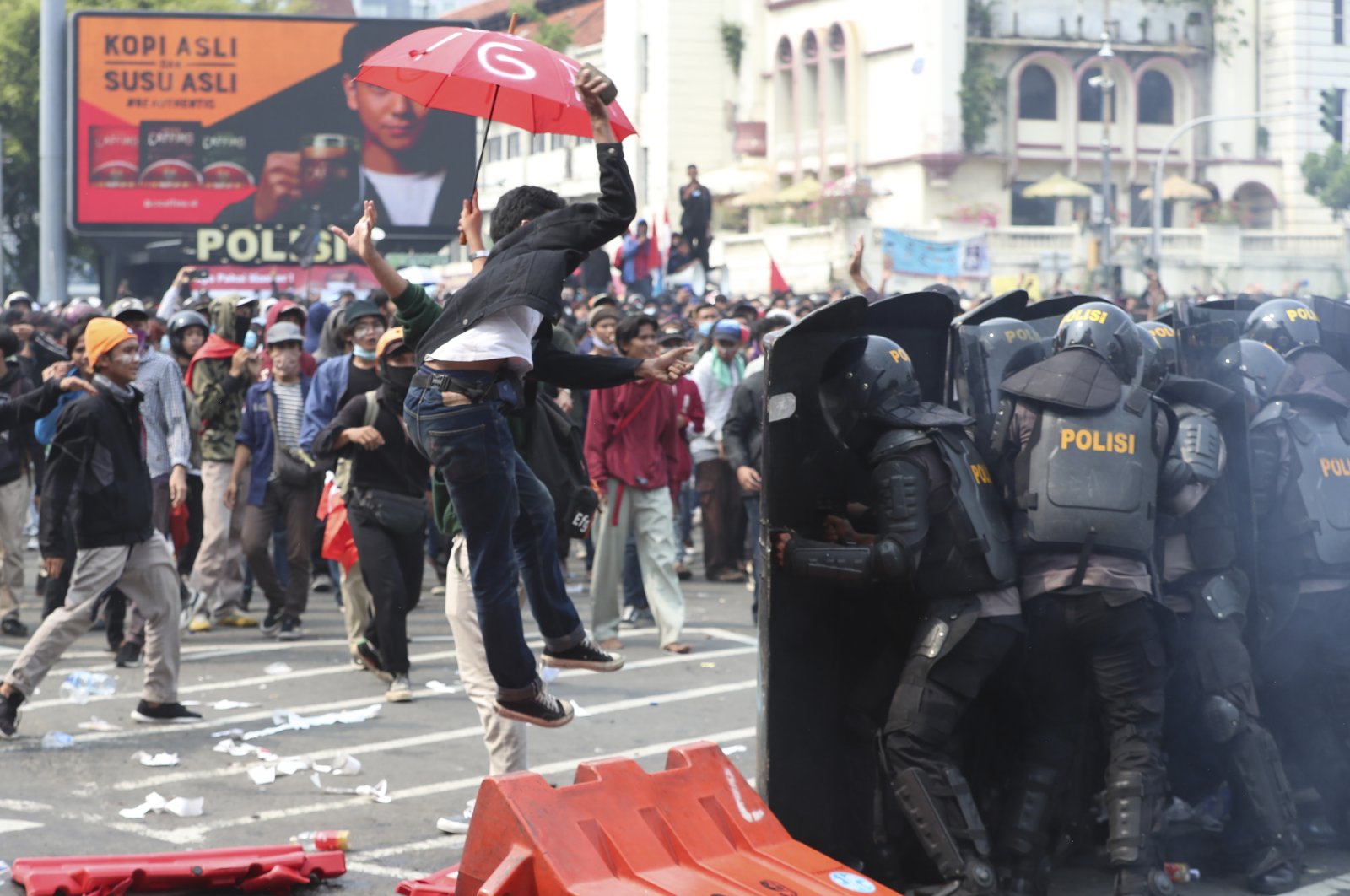 A protester tries to hurl a brick toward police trying block protesters from advancing on the presidential palace during a rally in Jakarta, Indonesia, Oct. 8, 2020. (AP Photo)
by ASSOCIATED PRESS
Oct 08, 2020 1:41 pm

Protests in many Indonesian cities turned violent Thursday as thousands of enraged students and workers criticized a new law they say will cripple labor rights and harm the environment.

Clashes between rock-throwing demonstrators and riot police broke out near Jakarta's presidential palace as police tried to disperse the protesters, including workers and high school and university students.

President Joko Widodo is visiting Central Kalimantan province and was not in the palace. Police fired tear gas at the protesters from several high schools and universities as they tried to approach the palace compound, turning roads into a smoke-filled battleground.

The protesters fought back, hurling rocks and bottles. An angry mob burned a traffic police post at an intersection near the palace, while other protesters set fires to tires and fiberglass road barriers.

Similar clashes occurred in large cities all over the country, including Yogyakarta, Medan, Makassar, Manado and Bandung, the capital of West Java province, where police arrested 209 people during two days of violent protests.

Organizers have called for a three-day national strike starting Tuesday demanding that the government revoke the legislation.

The Job Creation Law approved by Parliament on Monday is expected to substantially change Indonesia’s labor system and natural resources management. It amended 79 previous laws and was intended to improve bureaucratic efficiency as part of efforts by Widodo’s administration to attract more investment to the country.

The demonstrators say the law will hurt workers by reducing severance pay, removing restrictions on manual labor by foreign workers, increasing the use of outsourcing and converting monthly salaries to hourly wages.

"We vow to continue returning to the streets until the new law is revoked,” said Andi Khiyarullah, a protest organizer from the Indonesia Alliance’s student executive body.

"They have been provoked by invitations on social media to create a riot in Jakarta,” Yunus said. Indonesia, Southeast Asia’s largest economy, is eagerly courting foreign investors as key drivers of economic growth in a nation where nearly half the population of 270 million is younger than 30.