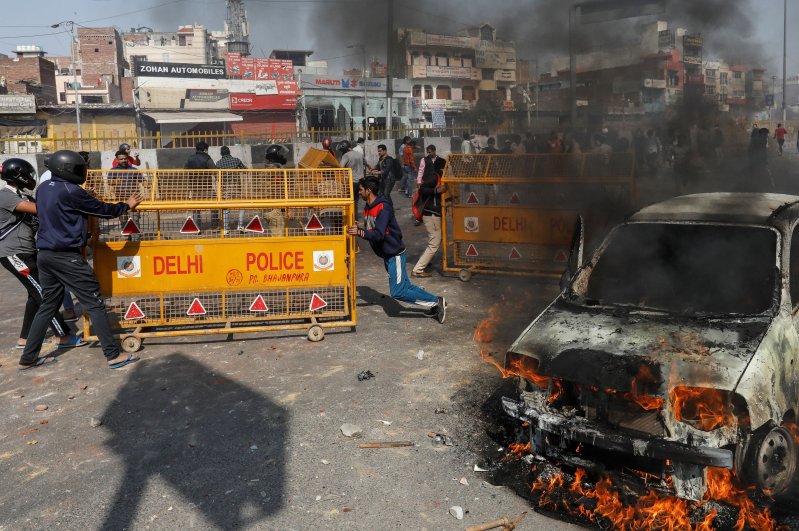 At least 13 people, including a policeman, were killed and around 150 injured in clashes between opposing groups in the Indian capital, the deadliest riots in the city since protests against a new citizenship law began over two months ago, while angry mobs burned down a mosque amid the ongoing clashes.

The clashes erupted in a northeastern district of the city between thousands of people demonstrating for and against the new citizenship law. Police used tear gas and smoke grenades but struggled to disperse the stone-throwing crowds that tore down metal barricades and set vehicles and a petrol pump alight.

"Some of the people brought in had gunshot wounds," said Dr. Rajesh Kalra, an additional medical superintendent at the Guru Teg Bahadur Hospital in New Delhi, as reported by Reuters.

Meanwhile, the Ashok Nagar Delhi Mosque was burned down by unidentified perpetrators.

According to local reports, the mosque was surrounded by angry mobs shouting ultranationalist Indian slogans while placing a “Hanuman flag” on the top of the mosque. Two Indian journalists were allegedly attacked by a mob when they were reporting about the burning mosque, as reported by the Week.

Tensions in parts of the city remained high on Tuesday with schools remaining shut in some areas amid news reports of fresh clashes. At least five metro stations in the city were closed. The violence began at the weekend and continued to rock the capital amid U.S. President Donald Trump and his family’s visit.

India’s Citizenship Amendment Act (CAA), which eases the path for non-Muslims from neighboring Muslim-majority nations to gain citizenship, has triggered weeks of sometimes violent protests against Prime Minister Narendra Modi’s government. The law is seen by its opponents as discriminating against Muslims.