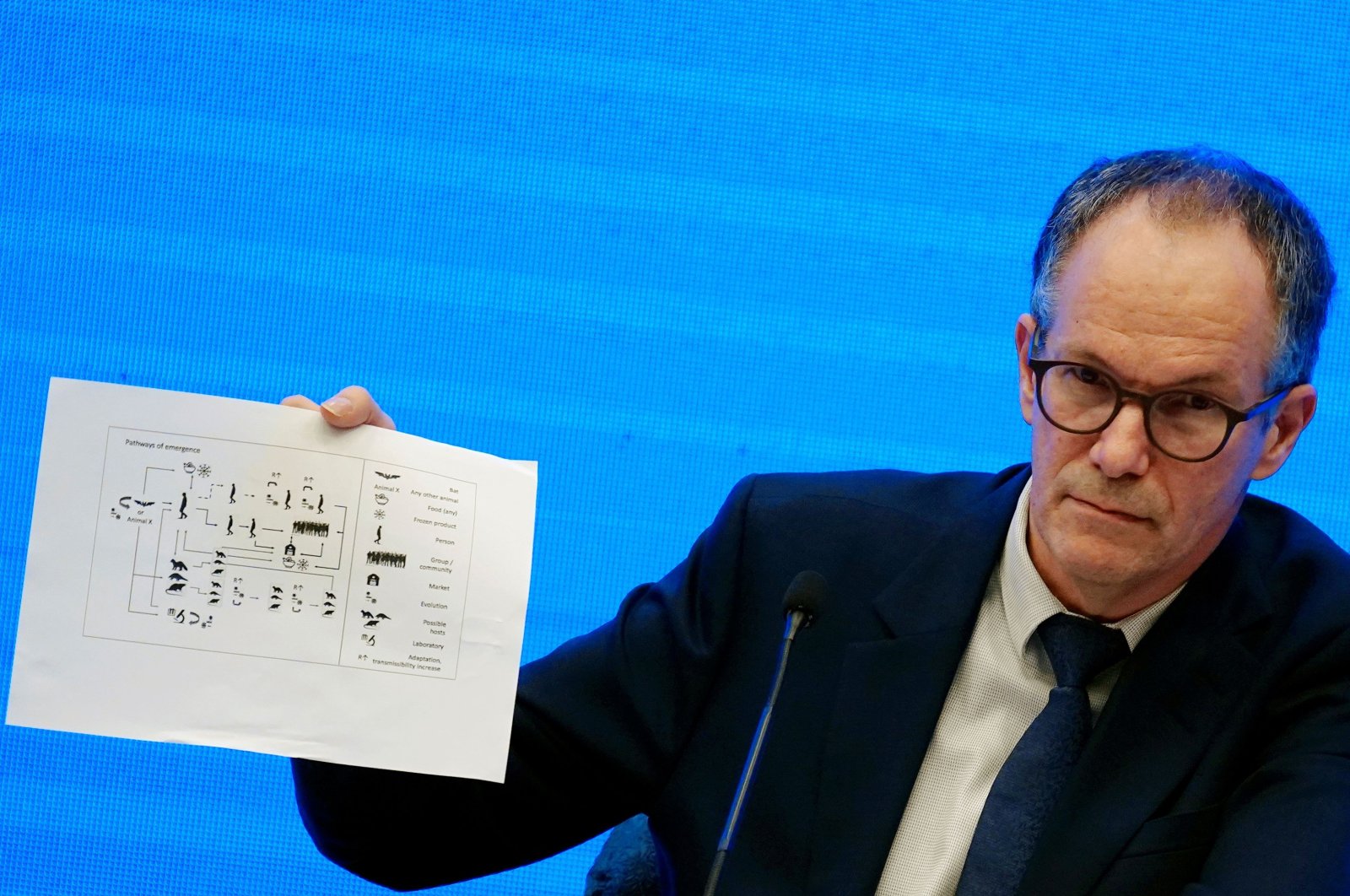 Peter Ben Embarek, a member of the World Health Organization (WHO) team tasked with investigating the origins of the coronavirus disease (COVID-19), holds a chart during the WHO-China joint study news conference at a hotel in Wuhan, Hubei province, China on Feb. 9, 2021. (Reuters Photo)
by French Press Agency - AFP Feb 09, 2021 2:21 pm
RECOMMENDED

A joint WHO and China team probing the origins of COVID-19 wrapped up Tuesday without providing any insights into the origins of the pandemic, as one of the Middle East's worst hit nations began a vaccination campaign.

Transmission from animals was likely, said Liang Wannian, head of the Chinese contingent, but the host of the virus, which has claimed more than 2.3 million lives and gutted the global economy "remain to be identified."

The WHO mission – which Beijing repeatedly delayed – was dogged by fears of a whitewash, with the U.S. demanding a "robust" probe and China firing back with a warning not to "politicize" the investigation. During the closely-monitored visit – which included a visit to a propaganda exhibition celebrating China's recovery – reporters were largely kept at arms' length from the experts.

Liang, supported by WHO foreign expert Ben Embarek, said there was "no indication" the sickness was circulating in Wuhan before December 2019 when the first official cases were recorded. Embarek also scotched controversial theories the virus had leaked from a lab, calling it "extremely unlikely."

As the global tally of infections passed 106 million, Britain was expected to become the latest country Tuesday to announce mandatory coronavirus tests in quarantine for all arrivals.

Iran began its vaccination campaign against COVID-19 on Tuesday to fight the Middle East's deadliest outbreak of the illness. It will initially use Russia's Sputnik V shots, with 4.2 million doses of the AstraZeneca-Oxford vaccines also expected under the COVAX mechanism, which intends to ensure procurement and equitable international distribution of jabs.

The AstraZeneca vaccine makes up the bulk of initial COVAX deliveries to some 145 countries – mostly in poorer parts of the world – but it suffered a setback in recent days with a trial showing it only offers minimal protection against the coronavirus variant first detected in South Africa.

The results forced South Africa to delay the start of its vaccination campaign, but the WHO insisted Monday that the AstraZeneca shot remained vital to the global fight against COVID-19. Richard Hatchett, head of the Coalition for Epidemic Preparedness Innovations (CEPI), said it was "vastly too early to be dismissing this vaccine."

"It is absolutely crucial to use the tools that we have as effectively as we possibly can," he said at a WHO press briefing.

AstraZeneca has stood by its vaccine, and said researchers are working on an updated version that can be effective against the new variants. WHO authorization for the shot is expected next week.

Despite the vaccine rollouts, the virus remains on the march with more than 106 million known infections worldwide. The most vulnerable have been forced to take the risk of catching COVID-19 by going out to work and make ends meet.

"They tell us not to go out. But what are we going to eat?" said Gerardo Acevedo, who has a stall selling socks in downtown Mexico City.

The economic devastation is near-universal, including in the United States, the world's biggest economy and the nation worst-hit by the virus. New President Joe Biden is aiming to ramp up vaccinations, saying Monday his administration hopes to have enough vaccines for 300 million people before the summer.

Among Biden's key aims is to ensure the safe reopening of schools, with experts and parents warning of a mental health crisis among children who have been away from classrooms for months.

"It makes me feel lonely because I'm just sitting down here in the basement all by myself, all day, pretty much almost every day," said Daniel Mooney, a third-grader in the city of Falls Church in Virginia. "And there's really nothing I can do about it. The only thing I can really do is say that I really, really want to be back in school."