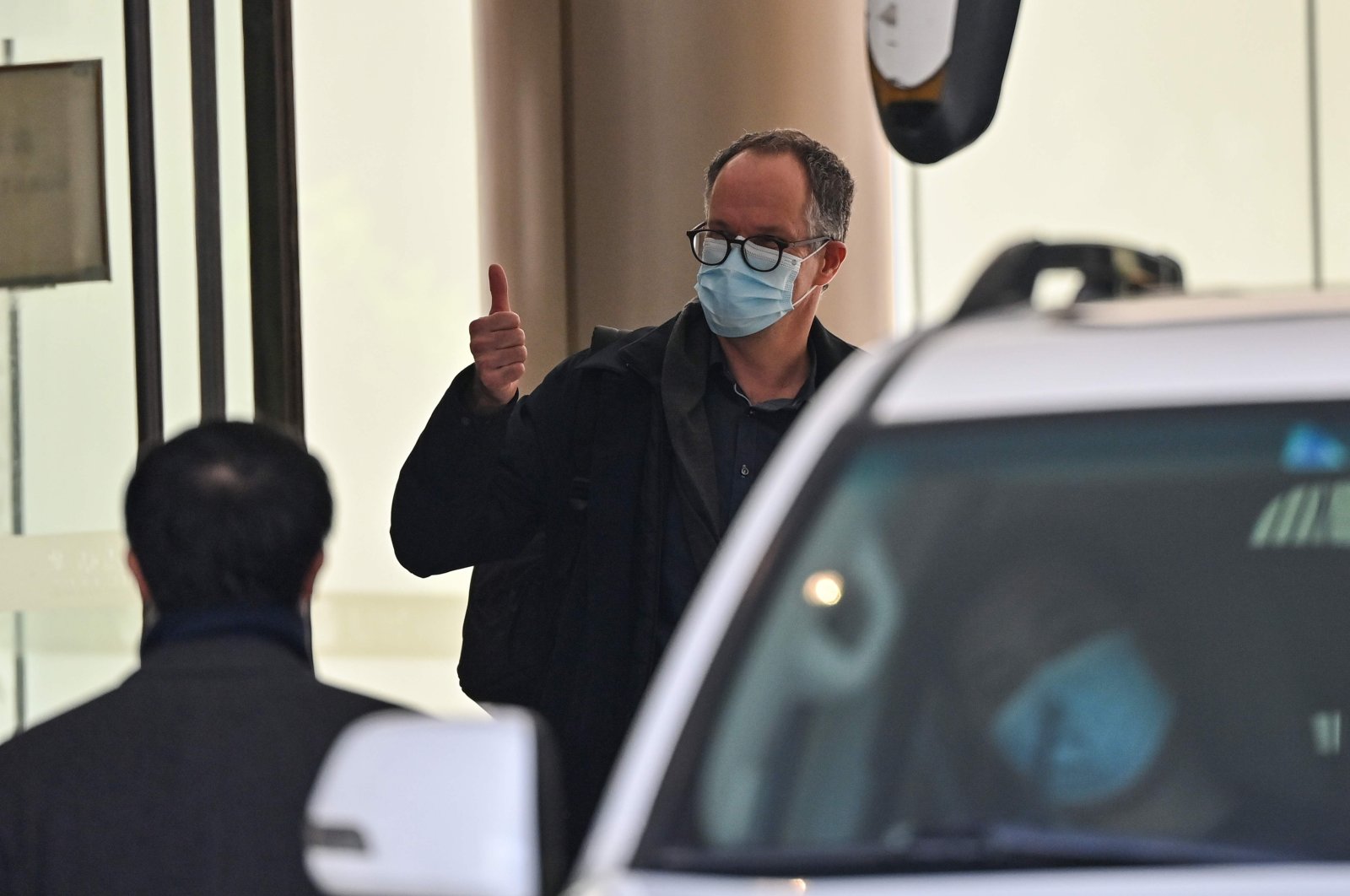 One of the members of the World Health Organization (WHO) team investigating the origins of the coronavirus pandemic gives a thumbs-up as he leaves The Jade Hotel after completing quarantine in Wuhan, central Hubei province, China, Jan. 28, 2021. (AFP Photo)
by ASSOCIATED PRESS Jan 28, 2021 10:11 am

As Beijing has repeatedly impeded the global inquiry into the emergence of the coronavirus, a team of experts from WHO left quarantine in Chinese city of Wuhan to begin a heavily scrutinized probe

A team of experts from the World Health Organization (WHO) have completed two weeks of quarantine in the Chinese city of Wuhan and will now begin a delayed, closely watched investigation into the origins of the virus that sparked the COVID-19 pandemic.

The researchers, who were required to isolate for 14 days after arriving in China, left their quarantine hotel with their luggage – including at least four yoga mats – in the midafternoon and headed to another hotel.

The mission has become politically charged, as China seeks to avoid blame for alleged missteps in its early response to the outbreak. A major question is where the Chinese side will allow the researchers to go and whom they will be able to talk to.

Yellow barriers blocked the entrance to the hotel, keeping the media at a distance. Before the researchers boarded their bus, workers wearing protective outfits and face shields could be seen loading their luggage, including two musical instruments and a dumbbell. The hotel staff waved goodbye to the researchers, who were wearing face masks.

The bus driver wore a full-body white protective suit. They drove about 30 minutes to a lakeside Hilton resort-like hotel. Former WHO official Keiji Fukuda, who is not part of the team in Wuhan, has cautioned against expecting any breakthroughs, saying it may take years before any firm conclusions can be made about the virus’s origin.

"This is now well over a year past when it all started," he said earlier this month, according to The Associated Press (AP). "So much of the physical evidence is going to be gone. The memories of people are imprecise and probably the physical layouts of many places are going to be different than they were."

Among the places they might visit are the Huanan Seafood Market, which was linked to many of the first cases, as well as research institutes and hospitals that treated patients at the height of the outbreak. It hasn't been disclosed whether they will leave Wuhan. One possible source of the virus is bats in caves in rural Yunnan province, about 1,600 kilometers (1,000 miles) southwest of Wuhan.

Foreign Ministry spokesperson Zhao Lijian said the experts would have talks, visits and inspections in China to carry out virus-tracing exchanges and cooperation. He did not provide any details.

The mission only came about after considerable wrangling between the two sides that led to a rare complaint from the WHO Director-General Tedros Adhanom Ghebreyesus that China was taking too long to make the final arrangements.

China, which has strongly opposed an independent investigation it could not fully control, said the matter was complicated and that Chinese medical staff was preoccupied with new virus clusters in Beijing, Shanghai and other cities.

While the WHO was criticized early on, especially by the U.S., for not being critical enough of the Chinese response, it recently accused China and other countries of moving too slowly at the start of the outbreak, drawing a rare admission from the Chinese side that it could have done better. Overall, though, China has staunchly defended its response, possibly out of concern over the reputational or even financial costs if it were found lacking. Chinese officials and state media have also tried to cast doubt on whether the virus even started in China.

Most experts believe it came from bats, possibly in southwest China or neighboring areas of Southeast Asia, before being passed to another animal and then to humans.

The origins search will try to determine where and exactly how that happened. White House Press Secretary Jen Psaki expressed concern Wednesday about what she called "misinformation" coming out of China, adding that the U.S. supports a robust international investigation. "It’s imperative that we get to the bottom of the early days of the pandemic in China," she said.

Zhao responded that any negative speculation and politicized interpretation of the mission is inappropriate.

"We hope the U.S. can work with the Chinese side in a responsible manner, respect facts and science, and respect the hard work of the international expert team in tracing the origin of the virus," he said, "so that they can conduct scientific research on the virus tracing without any political interference."