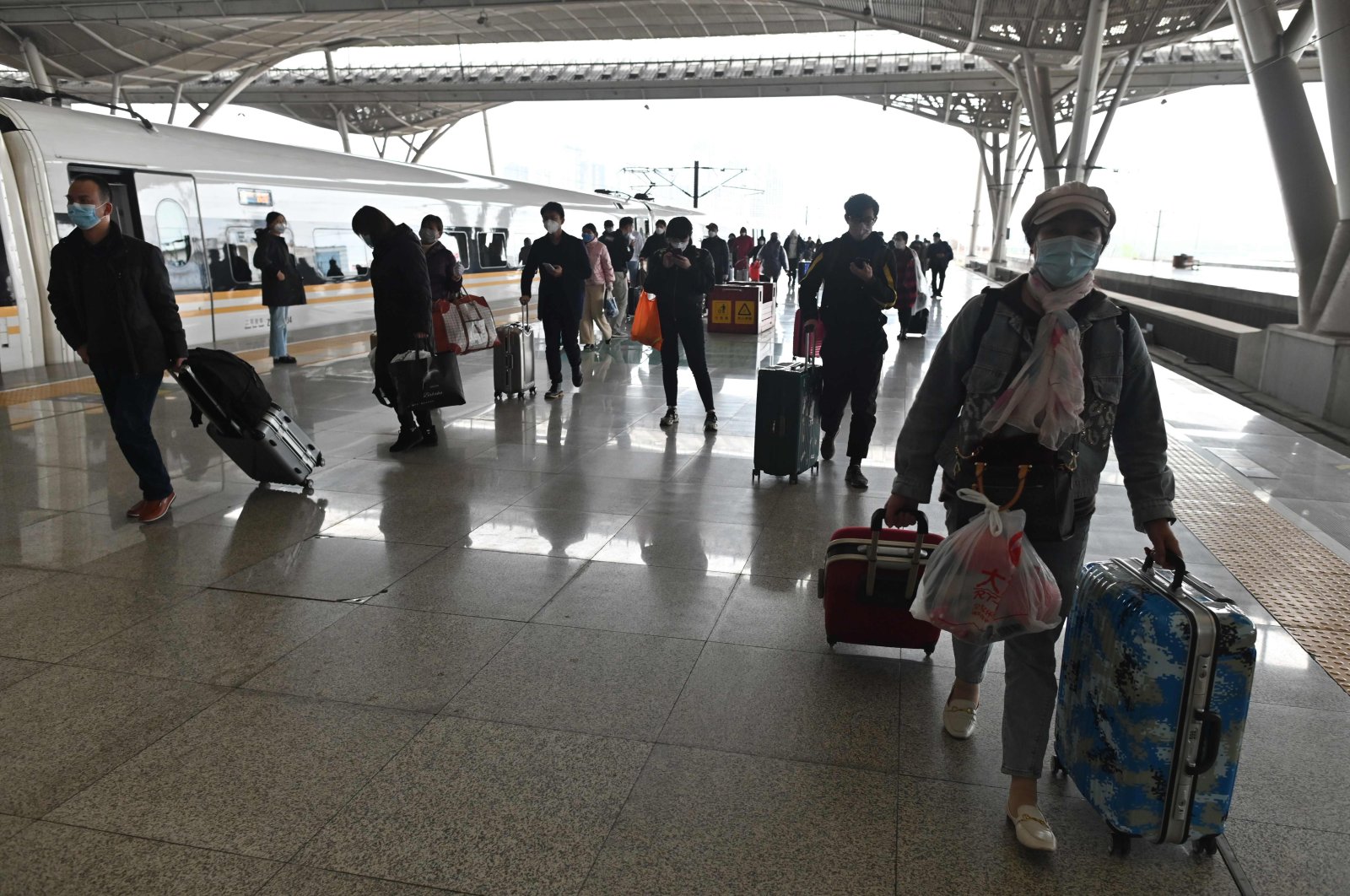 Passengers arrive at the railway station in Wuhan on March 28, 2020, after travel restrictions into the city were eased following two months of lockdown due to the COVID-19 outbreak. (AFP Photo)
by French Press Agency - AFP Mar 28, 2020 9:34 am
RECOMMENDED

The Chinese city of 11 million people that was Ground Zero for what became the global coronavirus pandemic partly reopened on Saturday after more than two months of almost total isolation.

Wuhan was placed under lockdown in January with residents forbidden to leave, roadblocks ring-fencing the city's outskirts and drastic restrictions on daily life. But the major transport and industrial hub has now signaled the end of its long isolation, with state media showing the first officially sanctioned passenger train arriving back into the city just after midnight. People are now allowed to enter but not leave, and many trains arriving Saturday had been fully booked days in advance.

Some had managed to slip back into the city a day earlier on rail services that were stopping in the city -- but nominally banned passengers from disembarking -- as enforcement of the travel ban began to ease. One woman who arrived on Friday said she and her daughter had been away from her husband for nearly 10 weeks. "As the train neared Wuhan, my child and I were both very excited," the 36-year-old told AFP on Saturday. "It felt like the train was moving faster than before, and my daughter said the driver must know we really want to go home.

"She rushed toward her father, and watching them from behind I couldn't help but cry," she added.

Staff at Wuhan station were all clad in full protective gear with reception desks lined up ready to process returnees who had been overseas. China is now battling to control a wave of imported cases as infections soar abroad. All arrivals in Wuhan have to show a green code on a mobile app to prove that they are healthy.

Elsewhere in China long lines of travelers queued up at train stations to board high-speed services back to Wuhan. Passengers in Shanghai had their temperatures checked by staff in goggles and masks after boarding their Saturday morning service. Restrictions on residents heading out of Wuhan will not be lifted until April 8, when the airport will also reopen for domestic flights.

Wuhan is the last area of Hubei province to see overland travel restrictions lifted, although some highways leading into the city had already reopened this week. Gao Xuesong, a worker in Wuhan's auto industry, arrived back in the city Friday night. "It almost feels like returning to an alien land, because I haven't been back for more than two months," he told AFP.

The new coronavirus was detected in December and has been linked to a market in the city that sold wild animals for human consumption. The city has paid a heavy price for the outbreak, with more than 50,000 people infected and more COVID-19 deaths than any other city in China. There were three more deaths in the city on Saturday, health officials reported.

Wuhan initially struggled to contain the outbreak. AFP reporters saw long queues of sick patients at one overwhelmed city hospital in January. But numbers have fallen dramatically in recent weeks. Official figures show there have been fewer than 20 new cases across the province in the past fortnight.

Most of Wuhan's subway network restarted on Saturday, while some shopping centers will open their doors next week. Banks reopened earlier this week and bus routes started operations -- but residents have been warned against unnecessary travel and those over 65 have been told to avoid public transport.

A study this week found that the lockdown in Wuhan succeeded in stopping the fast-spreading virus in its tracks and gave health care facilities crucial breathing room -- but warned against opening up the city too soon.

More than 2,500 people are still hospitalized with the disease in Wuhan, including nearly 900 "severe" cases.

Liu Dongru, of the Hubei Health Commission, said Friday that although parts of Wuhan had been reclassified as "low-risk" areas, work to control the virus needed to continue.

"Zero reported cases does not equal zero risk," he said.