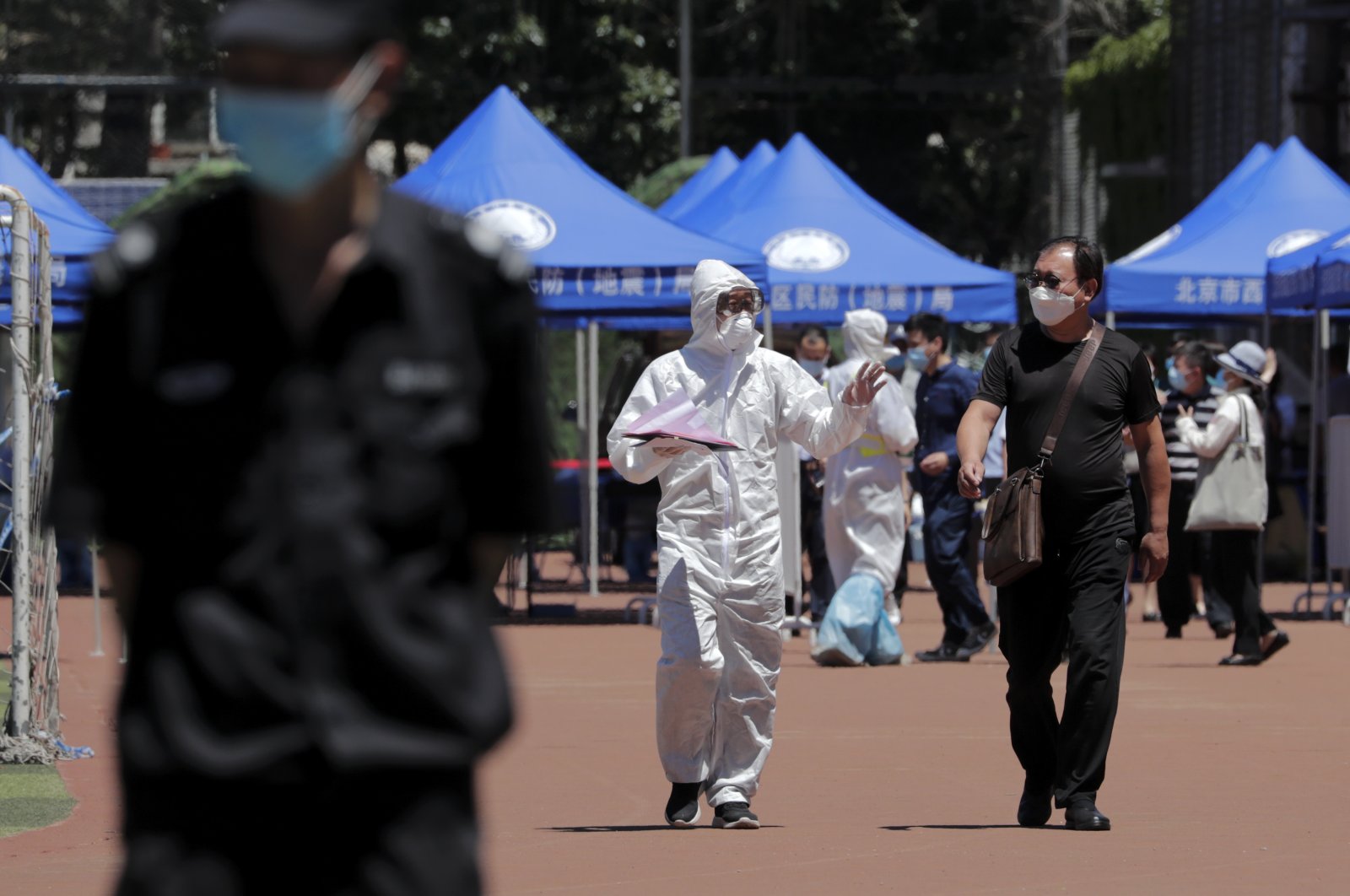 A worker in protective suit chats with a resident who was either living surrounding the Xinfadi wholesale market or have visited to the market to get a nucleic acid test at a stadium in Beijing, Sunday, June 14, 2020. (AP Photo)
by Associated Press Jun 14, 2020 9:20 am
RECOMMENDED

China reported its highest daily total of new coronavirus cases in two months on Sunday and infections in South Korea also rose, showing how the disease can come back as curbs on business and travel are lifted.

Meanwhile, Egypt reported its biggest daily increase on Saturday. Infections were rising in some U.S. states as President Donald Trump pushed for businesses to reopen despite warnings by public health experts.

China had 57 new confirmed cases in the 24 hours through midnight Saturday, the National Health Commission reported. That was the highest since mid-April and included 36 in the capital, Beijing, a city of 20 million people.

Beijing's cases all were linked to its biggest wholesale food market, which was shut down Saturday, the official China News Service reported, citing the city's disease control agency. It said 27 worked there and nine had direct or indirect exposure to it.

The Xinfadi market was closed after 50 people tested positive for the virus in the Chinese capital's first confirmed cases in 50 days.

The world is seeing more than 100,000 newly confirmed cases every day, according to data from Johns Hopkins University.

China, where the pandemic began in December, and other countries that suffered early on including South Korea, Italy and Spain have seen numbers of new infections decline. Brazil, India, the United States and other countries are seeing large increases.

China responded to the outbreak with the world's most intensive anti-disease controls, isolating cities with some 60 million people and shutting down much of its economy in steps that later were imitated by some other governments.

The ruling Communist party eased most limits on business and travel after declaring victory over the disease in March. Some curbs still are in place including a ban on most foreign travelers arriving in the country.

On Saturday, authorities in Beijing locked down 11 residential communities near the Xinfadi market. White fencing sealed off a road leading to apartment buildings and drivers were required to show identification to enter the area.

The Korea Centers for Disease Control and Prevention said 30 of the new cases were in the greater Seoul area, where half of the country’s 51 million people live. New cases have been linked to nightlife establishments, church services, a large-scale e-commerce warehouse and door-to-door sellers.

The Egyptian Health Ministry announced 1,677 new confirmed cases. Egypt is the Arab world’s most populous country and has its highest coronavirus death toll. The country has reported 1,484 deaths and 42,980 confirmed cases.

In the United States, the number of new cases in the southwestern state of Arizona has risen to more than 1,000 per day from fewer than 400 when the state’s shutdown was lifted in mid-May, according to an analysis by The Associated Press.

Gov. Doug Ducey is not requiring Arizona residents to wear masks in public despite warnings by public health experts outside the government.

The states of Utah and Oregon suspended further reopening of their economies due to a spike in cases.

The latest Chinese cases raised the mainland’s total to 83.132, with 4,634 deaths, according to the Health Commission. South Korea has reported 12,085 cases and 277 deaths.

Also Sunday, China's air regulator announced China Southern Airlines was required to suspend flights between Dhaka, Bangladesh, and the southern city of Guangzhou for four weeks after 17 passengers on Thursday's flight tested positive for the virus.

Beijing allows each airline to make one flight per week on each route. Under rules announced June 4, a route will be suspended for one week if five passengers on a flight test positive and four weeks if the number rises to 10.

The Council of State's decision allows for demonstrations and marches as long as health protections are respected. Events must be declared in advance to local authorities and not deemed a risk to public order.

The ruling came as an unauthorized protest against police violence and racial injustice wound down in Paris. Police had stopped at least 15,000 protesters from a planned march through the city Saturday, citing virus-related restrictions on any gathering of more than 10 people.