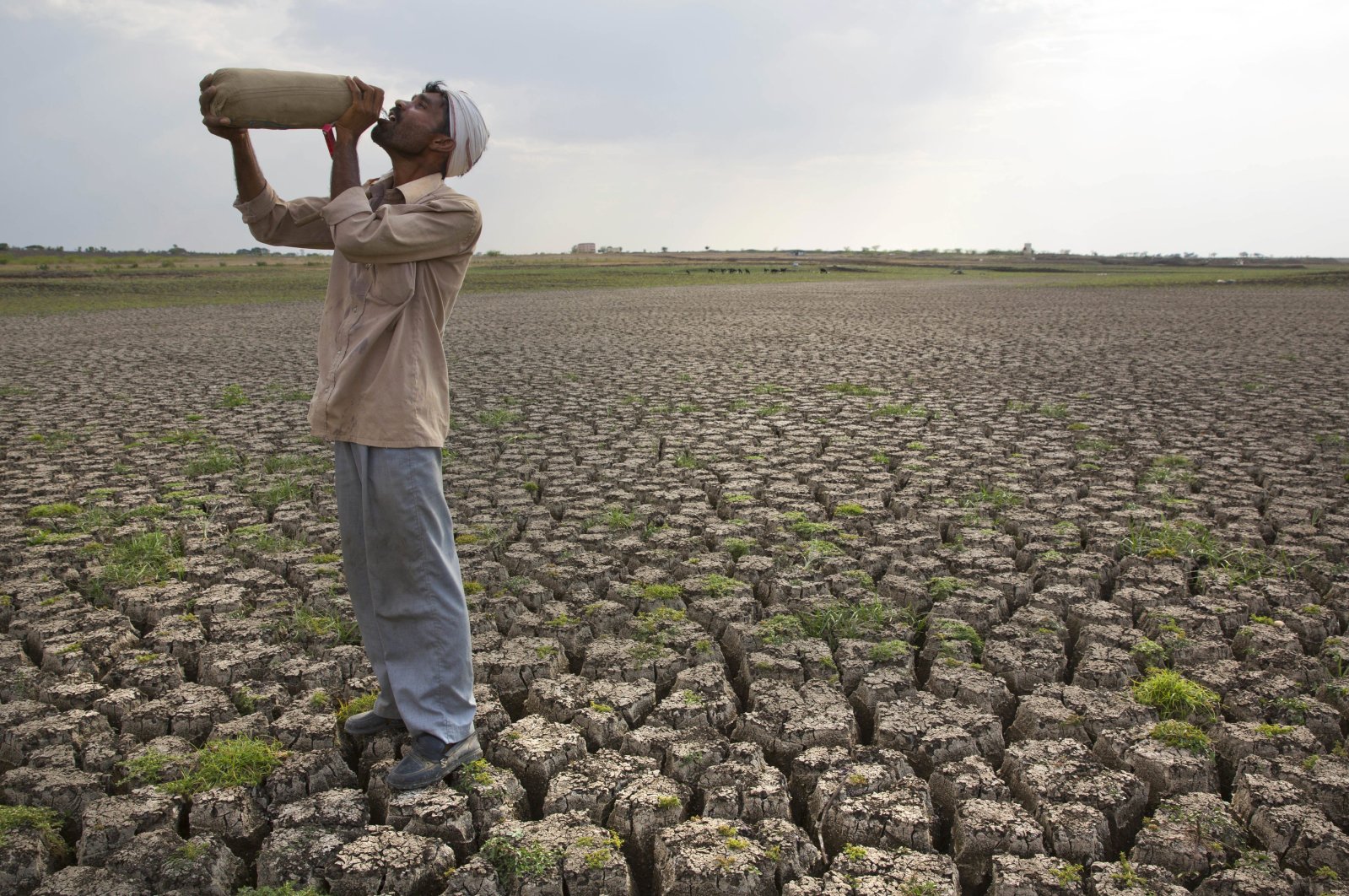 In this May 10, 2016, photo, a Shepard drinks water on the dry bed of Manjara Dam, which supplies water to Latur and nearby villages in Marathwada region, in the Indian state of Maharashtra. Many people are forced to leave their hometown due to changes in their local environment. (AP Photo)
by Anadolu Agency Jun 20, 2020 12:34 pm
RECOMMENDED

Already facing a legally undefined status, climate refugees must now contend with a shortage of decent medical care, as well as closed borders and international travel restrictions, making their lives excessively difficult during the global pandemic.

However, the debate on the issue has become more visible among academics, human rights advocates and environmental organizations as the negative effects of climate change are becoming more frequent and intense amid concerns that they will force more and more people to leave their homes in the near future.

On the occasion of World Refugee Day, Sumudu Atapattu, executive director of the Madison Human Rights Program at the University of Wisconsin (UW), and Abdullah Resul Demir, head of the Istanbul-based International Refugee Rights Association, spoke to Anadolu Agency about the climate migration issue on their social, legal and economic aspects.

Atapattu said there were increasing safety concerns among refugees where access to water and other basic hygienic measures were difficult due to the coronavirus outbreak: "It is [also] much harder because the borders are closed and international travel is not possible."

Responding to a question on the U.N.'s role in solving the legal status problem of climate migration or environmentally displaced people, she said this was a complicated and "very" political issue as the U.N. could only function via countries that were not concerned with resolving the issue.

However, there have been positive moves towards a legal solution, she said, citing the U.N. Human Rights Committee decision in Ioane Teitiota, v. New Zealand in January 2020, which she said was an important example.

Teitiota, author and citizen of the Republic of Kiribati, has claimed that New Zealand authorities violated his right to life under the International Covenant on Civil and Political Rights (ICCPR) by rejecting his application for refugee status in New Zealand and deporting him from the county in September 2015.

He claimed that the consequences of climate change and sea-level rise forced him to migrate from his home island of Tarawa to New Zealand.

"The Committee accepted that both sudden-onset events and slow onset events can trigger the movement of people seeking protection from climate-related harm. The Committee, while accepting the author's claim that sea-level rise could likely render the Republic of Kiribati uninhabitable, noted that this could take 10-15 years which 'could allow for intervening acts by the republic of Kiribati, with the assistance of the international community, to take affirmative measures to protect and, where necessary, relocate its population,'" she said.

Referring to the points that the court based upon its decision, Atapattu said: "The decision of the Committee rested on two main grounds: First, the threat to the author's right to life was not imminent; and second, the Republic of Kiribati was actively pursuing adaptation measures."

To achieve a solution to the climate refugees issue, she stressed that urgent recognition of this category of people, affected by environmental disasters and the right of their legal protection abroad, was necessary.

"People will move whether there is a legal framework or not if it is not safe for them to remain in their home country. So being prepared for that eventuality is better than not taking steps at all," she said, referring to the COVID-19 outbreak which she asserted showed how ill-prepared the world was even after the virus threat became very visible.

Abdullah Resul Demir said that although the coronavirus had no positive or negative impacts on refugees who did not have legal status, these refugees have been negatively affected as part of the economy, education and health.

"For instance, during the distance learning period, these refugees did not have very high-quality education due to the lack of needed technological equipment such as internet connectivity and they could not go to hospitals even though they thought they contracted the virus due to the fear of deportation," he said.

Demir went on to say that, since most migrants did not work with insurance when businesses were closed as part of the COVID-19 measures, they were facing serious economic difficulties.

"This situation applies to climate refugees worldwide as well, as it is the common refugee psychology," he added.

The reason behind the environmental migration for this was "the unequal income distribution and system of exploitation" in the world and as long as these economic irregularities continue, people will continue to migrate to live in better conditions for a better future, he highlighted.

The pandemic once again showed that the health, economic welfare and education of every individual around the world was important, as the virus quickly spread from one side of the world to the other.

"To eliminate the climate-change-related or environmental factors causing migration, the international community must collaborate and solve the problem at its source ... unless we can eliminate the causes of refugees, we will continue to celebrate the World Refugee Day dolorously," he said.

He concluded that such problems should be tackled in a humanistic manner, not with an economic or utilitarian perspective.

Designated by the U.N. in 2000 to honor refugees around the globe, World Refugee Day is celebrated annually on June 20, to raising awareness of the situation of refugees throughout the world.