COVID-19 pandemic is 'the most discriminatory crisis' for women: UN 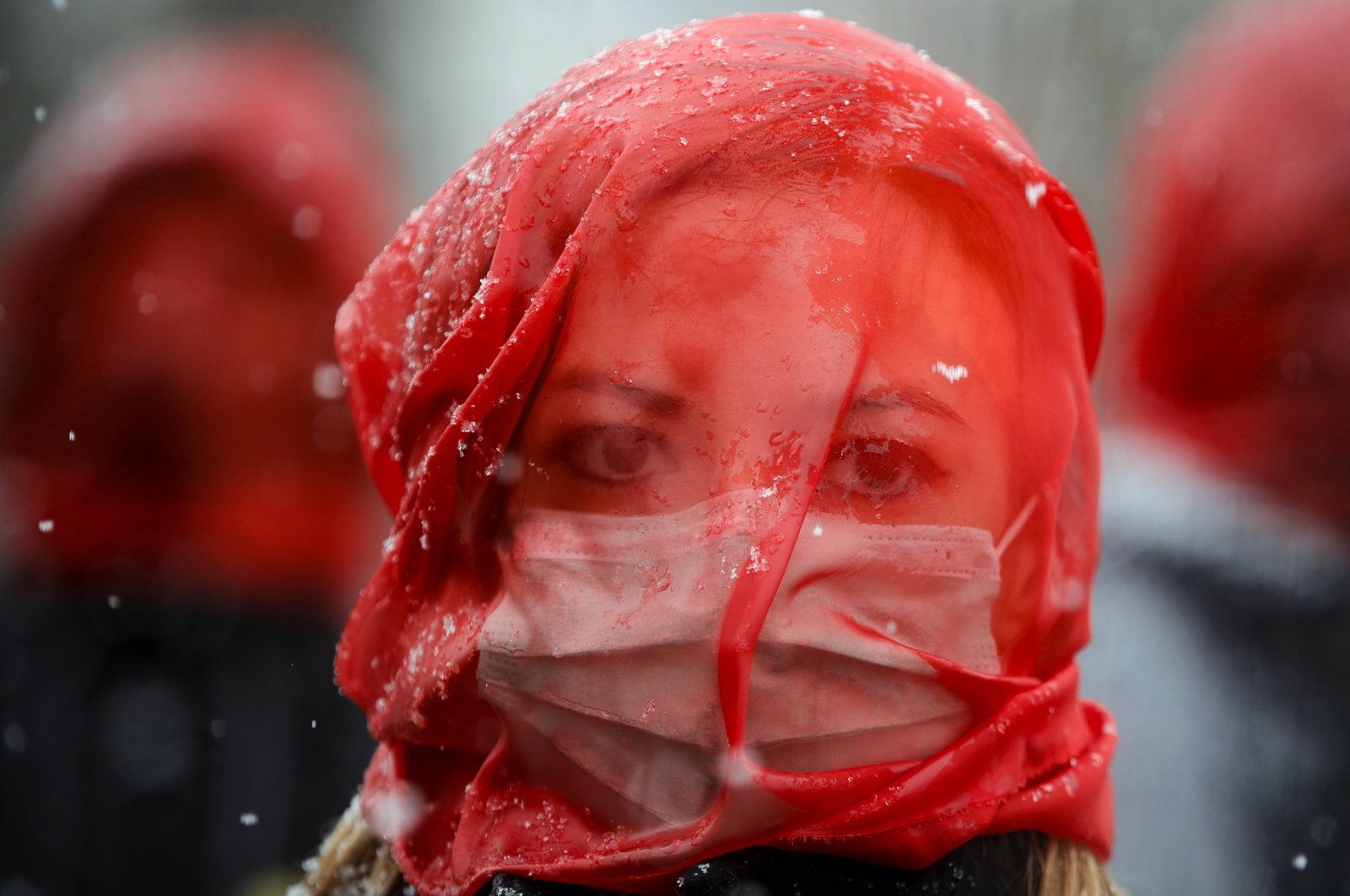 A woman wears a red veil during a flashmob to raise awareness of the increased levels of violence against women since the COVID-19 pandemic started one year ago, in Bucharest, Romania, March 10, 2021. (AP Photo)
by Agencies Mar 16, 2021 12:38 pm

The coronavirus pandemic has become an insurmountable wall for women around the world and has contributed to growing inequality, the head of U.N. Women says, pointing to women losing jobs far more often than men, with 47 million more being pushed into living on less than $1.90 a day in 2021

The head of U.N. Women called the COVID-19 pandemic "the most discriminatory crisis” that women and girls have ever experienced on Monday, pointing to women losing jobs far more often than men, a "shadow pandemic” of domestic violence, and 47 million more women being pushed into living on less than $1.90 a day this year.

Emerging from the pandemic, Phumzile Mlambo-Ngcuka said the world also faces more orphans and child-headed homes, an increase in child marriage, 59% of women reporting having to spend more time on domestic work since the pandemic began, and a digital gender gap leaving many women unprepared for the future.

She spoke at the opening of the annual meeting of the Commission on the Status of Women whose theme this year is on women's participation and decision-making in public life and combatting violence against women and girls. Mlambo-Ngcuka said the World Health Organization’s (WHO) latest report shows that the highest rates of intimate partner violence in the past 12 months –16% – was against young women aged 15 to 24.

A report for the commission’s session also underlined that "violence against women in public life is a major deterrent to their political participation, and affects women of all ages and ranks, in every part of the world,” she said.

U.N. Secretary-General Antonio Guterres said every month the toll from violence against women rises – from sexual abuse to child marriage.

"The damage is incalculable and will resound down the decades, into future generations,” he said.

According to The Associated Press (AP) the U.N. chief said the fallout from the pandemic "has shown how deeply gender inequality remains embedded in the world’s political, social and economic systems.”

Over the past year, Guterres said women leaders are among those who’ve kept COVID-19 transmission rates low and put their countries on track for recovery while countries with less effective responses to the pandemic "have tended to be those where strongman approaches prevail and women’s rights are under assault.”

But the secretary-general said "looking across the world, we see that women’s voices remain missing from the highest levels of leadership.”

"Women's equal participation is the game-changer we need," he said, calling for gender equality and gender parity in leadership.

According to the Inter-Parliamentary Union’s latest report released last week, only 25% of lawmakers worldwide are women and only 22 countries have a female head of state or government with Europe topping the list.

"Only 22 countries are headed by a woman Head of State or Government. And at current rates parity among Heads of Government will not be achieved until 2150," Guterres said.

"At current rates parity among heads of government will not be achieved until 2150,” Guterres added. "That’s right, another 130 years of men making the same kinds of decisions they have made for the past 130 years and more.”

Guterres said that countries "spend trillions on weapons that fail to make us safer, while neglecting the violence that one in three women globally have experienced," according to remarks carried by Agence France-Presse (AFP).

"Changing these default settings must be seen as an imperative," Guterres said, urging the U.N.'s 193 members to "enact an emergency response plan... to address violence against women and girls."

While these new numbers are little changed, U.N. Mlambo-Ngcuka said there are gains "to celebrate and inspire us.”

Despite these positive developments, Guterres said men are dominating decision-making during the pandemic. "A study of 87 countries found that 85% of COVID-19 task forces contained mostly men,” the U.N. chief said.

Guterres stressed that women have the skills and expertise for top jobs, and in many countries, they’re graduating from higher education at higher rates than men.

"What we need is not more training for women, but to train those in power on how to build inclusive institutions,” he said. "We need to move beyond fixing women and instead fix our systems.” Mlambo-Ngcuka called for "big, bold steps” and urged global leaders to make space, especially for young women to enter public life.

"We see them on the streets across the world, leading movements even in the face of lethal threat,” she said.

Like every year, the Commission on the Status of Women, which takes place from March 15 to 26, brings together thousands of women for speeches, exchanges and dozens of specific events. Its member countries began negotiating a 51-page document which, according to a recent version obtained by AFP, "recognizes that gender inequalities continue to be reflected in imbalances of power... between women and men," and that such inequality exists "in all spheres of society."

It also "expresses concern" at widespread violence against women in public life – including cyber-bullying, harassment, stalking and threatening.

Harassment – online or off – and sexual abuse "are a violation and abuse of human rights and pose a major impediment to women's... participation and leadership in all spheres of public life," the document continues, warning that such harassment can create a "hostile environment."

As with the 2020 session, the 65th Commission will be primarily virtual due to the pandemic.