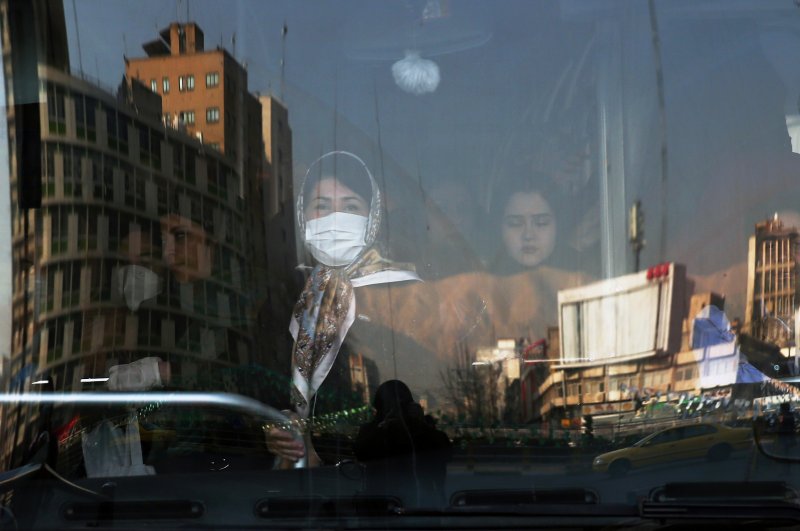 An Iranian woman wearing a protective mask to prevent contracting coronavirus stands in a bus in Tehran, Iran February 29, 2020. (Reuters via WANA)
by Compiled from Wire Services Feb 29, 2020 1:24 pm
RECOMMENDED

Iran's death toll from the coronavirus outbreak rose 43 Saturday as Mexico and Qatar confirmed the first cases of the virus in their countries.

At least 43 people have died due to the deadly virus, Kianush Jahanpur, a health official told state TV on Saturday, adding that the number of infected people across the country has reached 593.

"Unfortunately nine people died of the virus in the last 24 hours. The death toll is 43 now. The new confirmed infected cases since yesterday is 205 that makes the total number of confirmed infected people 593," Jahanpur told state TV.

Qatar's health ministry also reported on Saturday that they have diagnosed the first patient with coronavirus infection in the country.

The patient is a 36 year-old Qatari who returned recently from Iran, the ministry said in a statement, adding that he is a stable condition.

The three men – two in Mexico City and one in the northern state of Sinaloa – are all believed to have visited northern Italy, the epicenter of the virus in Europe.

"Probably all three were infected from the same source. All three are imported cases," Jose Luis Alomia, general director of epidemiology at the Ministry of Health, said at a press conference Friday.

Senior health ministry official Hugo Lopez-Gatell told a separate news conference that one of the men, a 35-year-old in the capital, "has a mild, mild illness" with symptoms "similar to that of a cold."

"He is a young individual and so he is at very low risk," he said.

The patient and five members of his family have been isolated at the National Institute of Respiratory Diseases, Lopez-Gatell added.

The second case, a 41-year-old man who returned from Bergamo in Italy, is in isolation at a hotel in Sinaloa after being tested by regional authorities, officials said.

A 59-year-old man in Mexico City who also visited northern Italy is the third case but authorities did not say whether he had been hospitalized.

Italy has recorded 650 cases of the coronavirus and 17 deaths across cities in the north.

In Mexico, two more, suspected cases are under analysis in the central state of Guanajuato and one in northwestern Durango.

"It is not a national or health emergency," Lopez-Gatell said, urging Mexicans to remain calm and not panic-buy protective items such as masks.

Mexico is the second Latin American nation to confirm coronavirus infections after Brazil said it had a case on Wednesday.

The virus has infected more than 85,000 people and over 2,900 have died – mostly in China where the epidemic started.