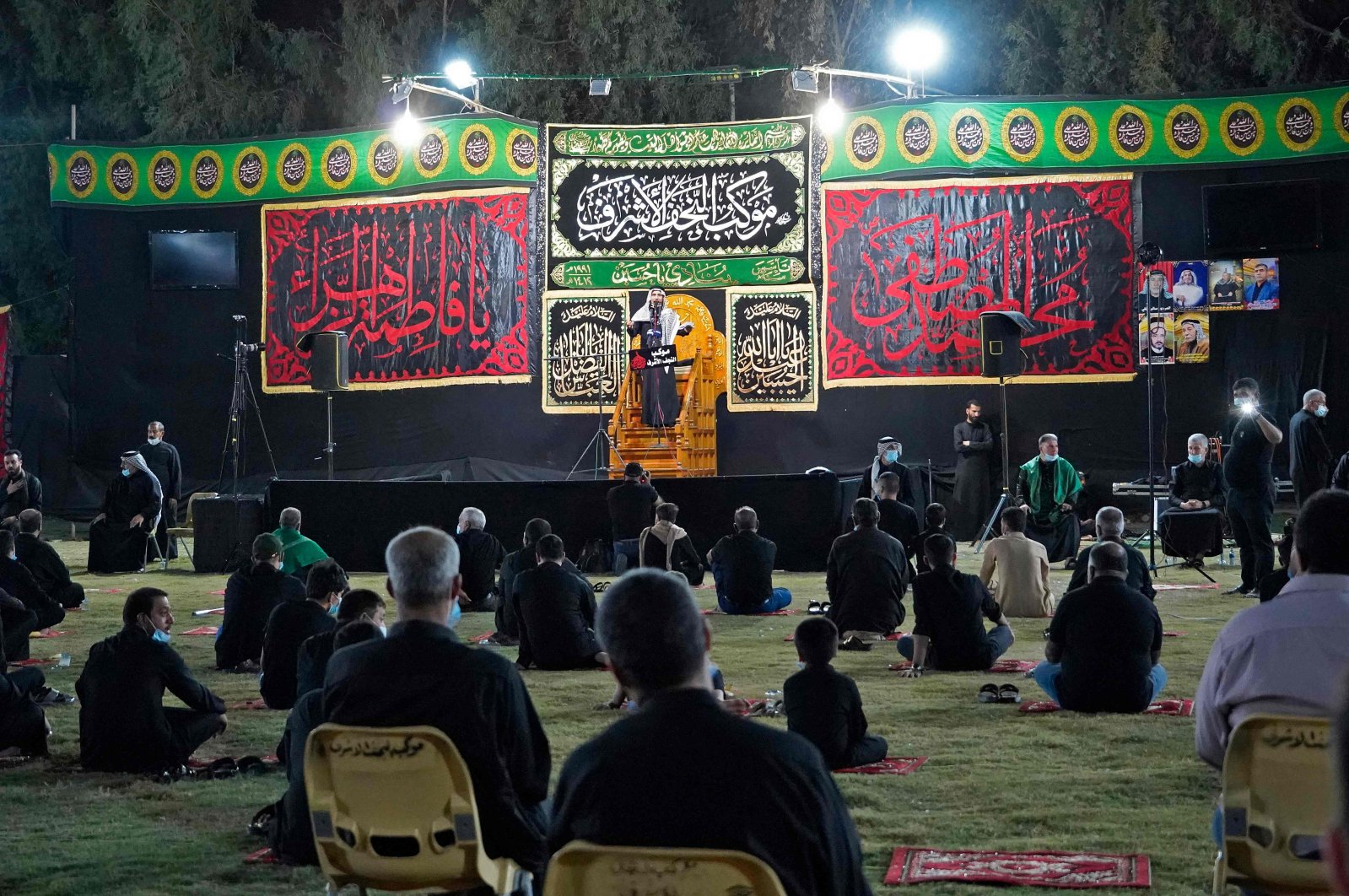 Iraqi Shiite Muslims respect social distancing in light of the coronavirus as they gather to commemorate the start of the month of Muharram ahead of Ashura, in the central city of Najaf, on August 20, 2020. (AFP Photo)
by French Press Agency - AFP Aug 21, 2020 5:11 pm
RECOMMENDED

Shiite pilgrims poured into the Iraqi shrine city of Karbala Friday to perform the rites of the holy month of Muharram, ignoring calls to stay home as COVID-19 spreads.

The pilgrimage is expected to be one of the largest religious gatherings in the Muslim world since the onset of the coronavirus pandemic, which already forced Saudi Arabia to hold the smallest hajj in modern history.

The month of Muharram, the first on the Islamic calendar, will later include commemorations for the Prophet Mohammed's grandson Hussein, who was killed in 680 AD at the Battle of Karbala, the seminal event in Islam's confessional divide.

Usually, millions of Shiites from around the world flock to Iraq to commemorate the birth of their faith, praying, eating and reflecting together. But this year, authorities in Iraq, Iran and beyond have repeatedly urged their citizens to forgo real-life pilgrimages due to the high risk of contracting the coronavirus.

Still, by Thursday night, thousands of pilgrims were already en route to the gates of the golden mausoleums in the holy city of Karbala, some masked and gloved but others proceeding shoulder-to-shoulder as they always have been.

Enormous tents have been erected as usual to host pilgrims in Baghdad and Basra as well as Karbala, but with a new twist, an attempt at social distancing.

On the ground, stickers of footprints or large crosses suggest how far worshippers should stay from one another.

In neighboring Iran, reformist newspaper Arman called it "the most astonishing Muharram of the century."

Some worshippers adapted quickly: Ali Moadab, who writes funerary chants traditionally recited during Muharram, told AFP he would perform the hymns live on Instagram. At home, he said, "I will read to my family books telling the story of Imam Hussein."

Meanwhile, in Lebanon, powerful Shiite movement Hezbollah announced that no large tents would be installed this year, and families were urged to celebrate at home.

Muslims in the Bahraini capital Manama watched televised and online commemorations, as access to mosques was severely restricted.

"We are used to being there in person, and before Muharram starts we usually help with the placing of the black cloths. This year, it is heart-breaking," said Ali, a 22-year-old shopkeeper in Manama who was watching prayers online.

Without the throngs of people worshipping or marching outside, the only indications Muharram had begun were the ubiquitous black flags.

In Karbala, there were markedly smaller crowds under the grim banners of the Imam Hussein mausoleum – and for the first time, nearly all were locals, as entry to the province had been banned for non-residents. Iraqis from other provinces managed to sneak into the city, using unmarked roads to circumvent checkpoints.

Grand Ayatollah Ali Sistani, the top cleric for many of the world's Shiites, had called for all ceremonies to be broadcast live and for the faithful to pray at home or to wear masks and keep their distance if praying in public.

Other religious figures appear to have thrown caution to the wind, directing their followers to gather in large numbers as usual throughout the first 10 days of Muharram.

On August 30, believers are expected to gather for Ashura, the apogee of the month of mourning, when many display grief over the death of Hussein, a figure widely revered in the Shiite tradition.