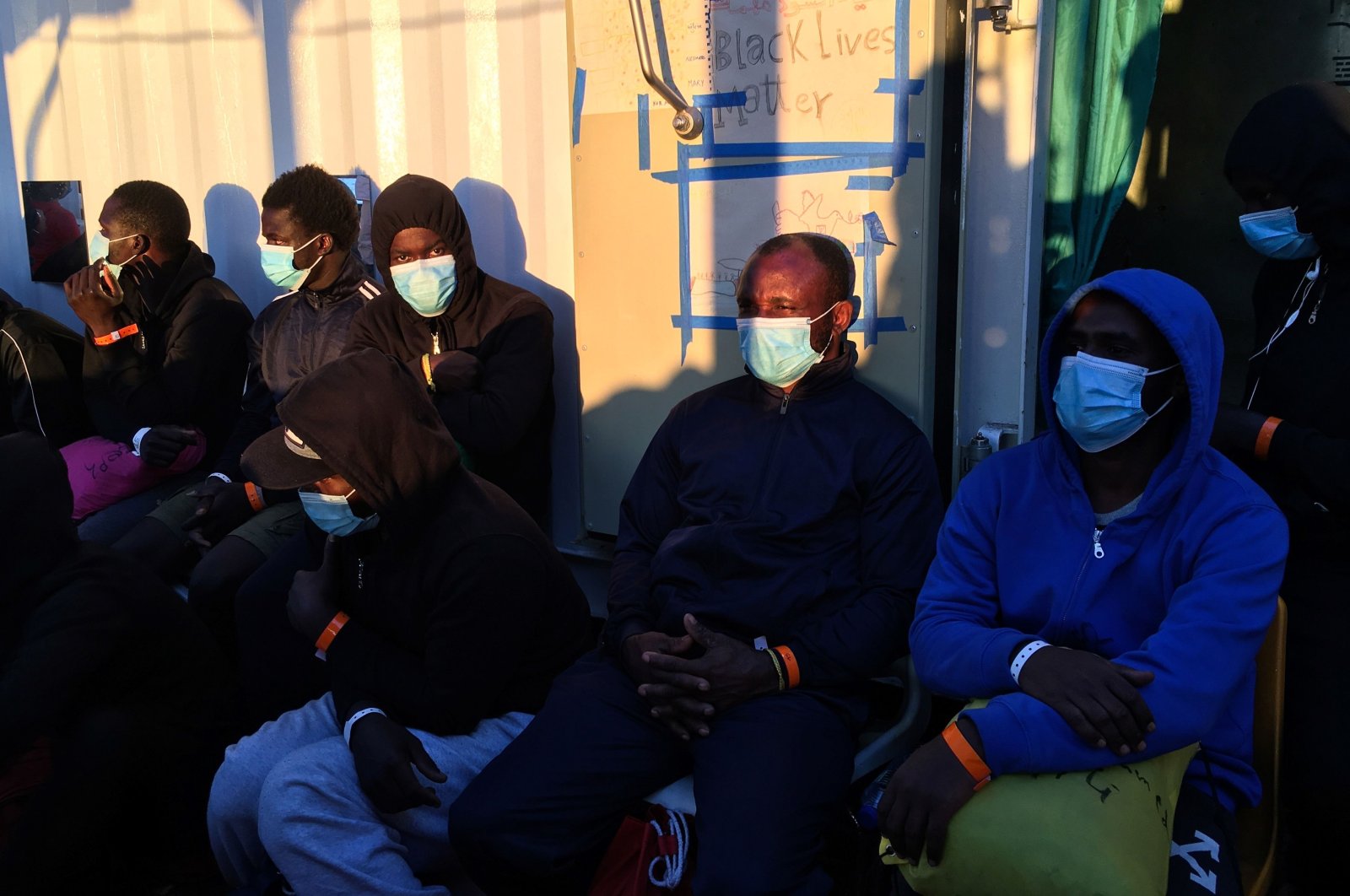 Migrants wearing protective facemasks on board of the humanitarian aid boat Ocean Viking, chartered by charity group SOS Mediterranee, prepare to disembark upon their arrival on July 6, 2020.
by daily sabah with afp Jul 27, 2020 5:42 pm
RECOMMENDED

Around 100 migrants fleeing war-ravaged Libya have run into difficulty in the Mediterranean and could drown, the U.N. said Monday, urging a rapid rescue.

The arrival of summer and more favorable conditions at sea tends to lead to an increase of attempts to cross the Mediterranean, and the deteriorating situation in Libya is also prompting more migrants to take their chances at sea and reach Europe.

The International Organization for Migration (IOM) warned in a tweet that "around 95 migrants are still floating in the Central Mediterranean at risk of drowning, after attempting to flee Libya."

IOM was aware that the migrants had "been at sea for at least 37 hours sending distress calls", spokeswoman Safa Msehli told Agence-France Presse (AFP) in an email.

The U.N. agency did not provide any further details but stressed in its tweet that "states and shipmasters have a moral and legal obligation to respond to distress cases at sea.

"Delays in rescue have resulted in avoidable deaths in the past and inaction is absolutely inexcusable," Msehli said.

More than 100,000 migrants tried to cross the Mediterranean last year with more than 1,200 dying in the attempt, according to the IOM.

Tens of thousands of refugees and asylum seekers, as well as sub-Saharan African and Asian migrants hoping to make it to Europe, have found themselves stranded in Libya in horrifying conditions.

Migrant departures from Libya's coast increased by nearly 300% this year between January and the end of April, compared to the same period in 2019, according to the U.N.

Armed conflicts in Libya have deepened the humanitarian, political and security crises since the conflict erupted between the two rival factions that emerged following the ousting of late ruler Moammar Gadhafi in 2011 – namely, putschist Gen. Haftar and the U.N.-recognized Government of National Accord (GNA) in Tripoli.

Warlord Haftar is primarily supported by Egypt and the United Arab Emirates (UAE), while the GNA in Tripoli enjoys U.N. and international recognition. Although a cease-fire was reached on Jan. 12, following U.N.-led diplomatic negotiations for a peaceful political solution, Haftar militias have repeatedly violated the truce.