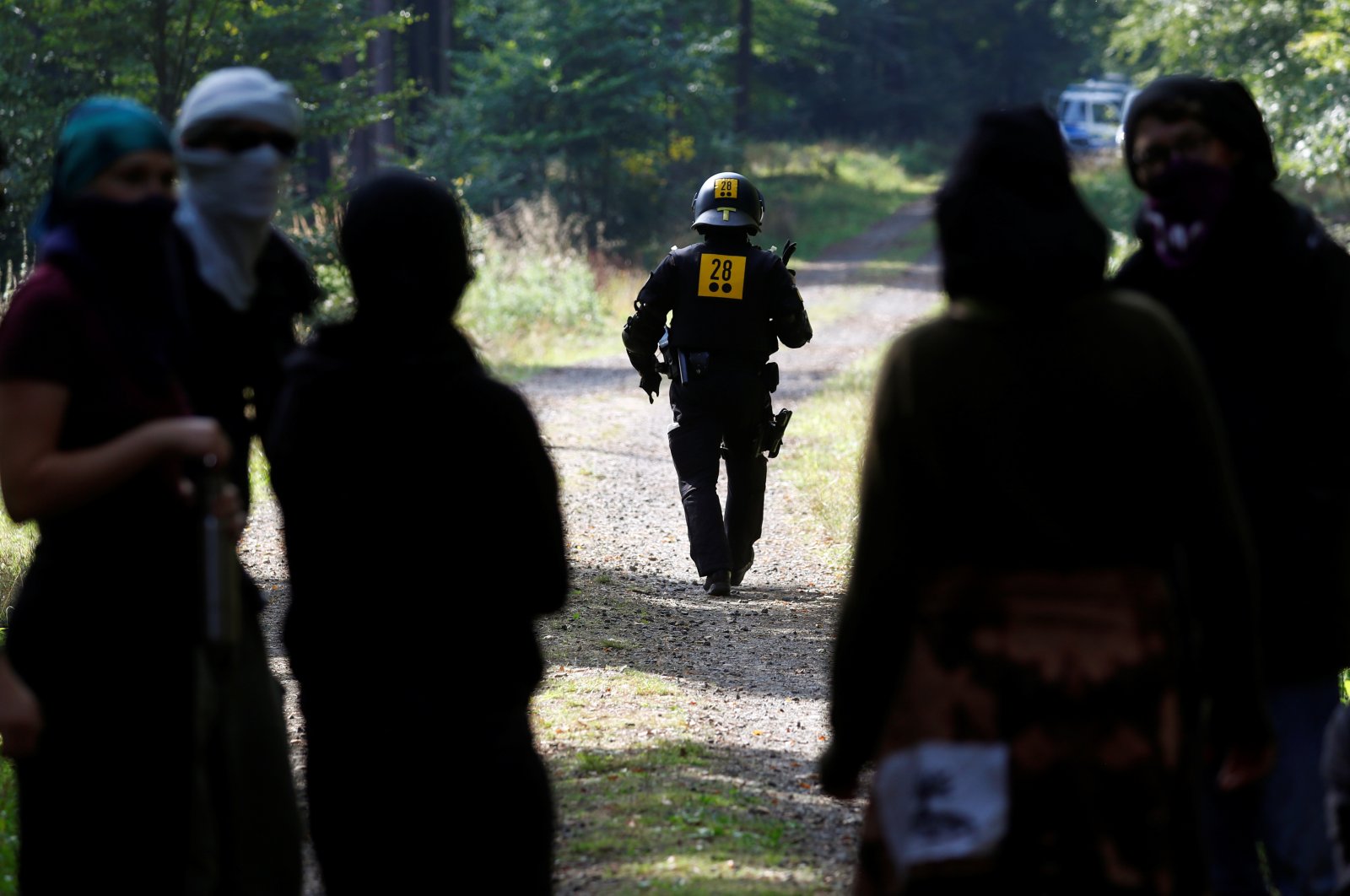 A police officer walks as the police and forest workers clear a camp at the Dannenrod forest during a protest of environmentalists against the extension of the highway Autobahn 49, in Dannenrod, Germany, Sept. 16, 2020. (Reuters Photo)
by Compiled from Wire Services Sep 16, 2020 1:30 pm
RECOMMENDED

Authorities in western Germany have suspended 29 police officers suspected of sharing far-right propaganda in WhatsApp groups, at least two of which were active for several years, a top security official said Wednesday.

The material that was shared included "the foulest and most repugnant neo-Nazi, racist and anti-refugee agitation,” said Reul, who added that the case left him "speechless.”

The offending images included pictures of Adolf Hitler and swastikas, a fictional depiction of a refugee in the gas chamber of a concentration camp and another mocking the shooting of black-skinned people, Reul added.

The material was exchanged in at least five WhatsApp groups used entirely or largely by police officers, Reul said. One of those groups apparently was set up in 2012, and the one that contained the most images, in 2015. The most recent message was sent on Aug. 27.

Most of the officers allegedly involved worked at some point at the same police precinct in Muelheim an der Ruhr, Reul said. All 29 were suspended effective immediately on Wednesday, and disciplinary proceedings were opened.

"We have to ask unpleasant questions of ourselves,” Reul said. "Who knew about this? Why was this tolerated for years? By whom?"

The case puts a spotlight on neo-Nazi ideology in Germany's police forces, an issue that senior security officials had previously downplayed even as they warned of the growing threat of far-right violence in recent years.

In July, Germany's top security official at the federal level, Horst Seehofer, rejected calls for an investigation into the extent of racial profiling by the police, insisting that there was "no structural problem.”

However, he acknowledged in May that the number of anti-Semitic crimes committed in Germany rose last year by 13%, while the number of politically motivated crimes rose by 14% last year to 41,177, more than half of which were committed by far-right radicals. Crimes, mostly vandalism, committed by left-wing militants jumped by 23%.

"The biggest threat in our country comes from the right," Seehofer said.

In April, far-right groups in Germany threatened the chairman of Turkey’s state-run Yunus Emre Institute, which is charged with promoting Turkish language and culture around the globe, in the capital Berlin.

Speaking to Anadolu Agency (AA), Feyzullah Bahçi, who has been working in Berlin for two years, said that a letter with racist comments was placed on his car window. Bahçi found the letter when he got in his car to go shopping.

“When I took the letter, I saw that it was a threatening one. When I looked at other parts of the car, I also realized there were scratches on the hood and windows,” he said.

According to a report by a German daily on Sunday, some 871 attacks targeted the Muslim community in Germany last year.

Germany has been recording Islamophobic crimes separately since 2017. The total number of cases in 2019 has not been officially announced. In 2018 there were 910, including 48 attacks on mosques alone, a little lower than 2017 with 1,095 crimes.