Airports close due to sandstorm on Spain's Canary Islands 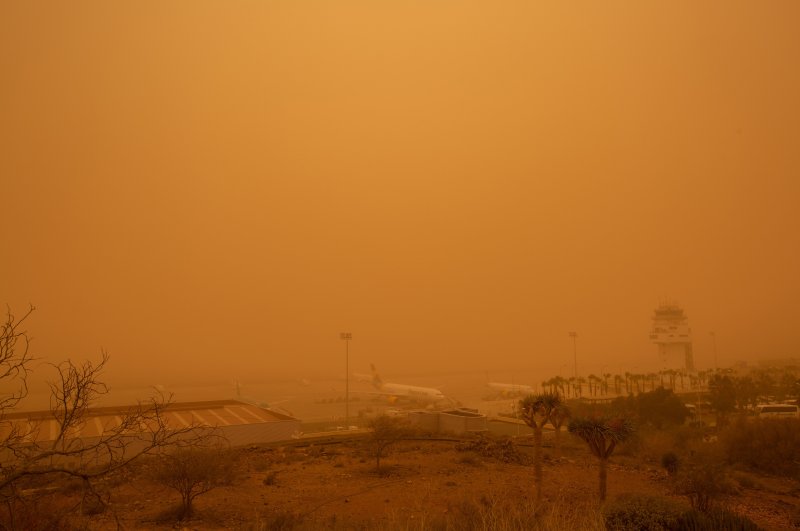 Planes are pictured at Tenerife South–Reina Sofia Airport during a sandstorm on Feb. 23, 2020 on the Canary Island of Tenerife. (AFP Photo)
by French Press Agency - AFP Feb 24, 2020 11:27 am
RECOMMENDED

Air travel was first disrupted on the archipelago on Saturday after strong winds carrying red sand from the Sahara shrouded the tourist hotspot, forcing flights to and from the islands of Gran Canaria and Tenerife to be canceled or diverted.

Some flights briefly resumed Sunday morning before Spanish airport operator AENA was forced to close all eight airports in the Canaries – the three in Gran Canaria and Tenerife as well as five others.

"Visibility is very low," a spokeswoman for the airport operator said.

AENA said flights were being diverted to mainland Spain as well as to Cape Verde, Morocco, Mauritania and Portugal.

In a tweet, Transport Minister Jose Luis Abalos thanked these countries for their "solidarity" and said air transport professionals "do not remember such adverse weather for air transport in the Canary Islands."

The regional government declared a state of alert on Saturday and advised people to keep doors and windows closed, avoid nonessential car travel and stay away from coastal areas.

Spain's national weather service warned that winds of up to 120 kilometers were set to buffet the Canaries until Monday.

Strong winds also prevented water-dropping aircraft from putting out fires near Tasarte village in southwest Gran Canaria, which have scorched around 300 hectares of land and forced 500 people to be evacuated, as well as in the neighboring island of Tenerife.

About 1,000 locals and tourists were evacuated in Tenerife as a precaution because of the risk from blazes which broke out near built-up areas in six municipalities on the north of the island amid scorching temperatures, said the head of the local government of Tenerife, Pedro Marin.

"We are facing a completely unusual situation. It is the first time that so many fires have broken out in so many municipalities at the same time, and in different places," he told a news conference.

Located off the coast of Morocco, the Canary Islands are a popular tourist destination for northern Europeans seeking winter sunshine.