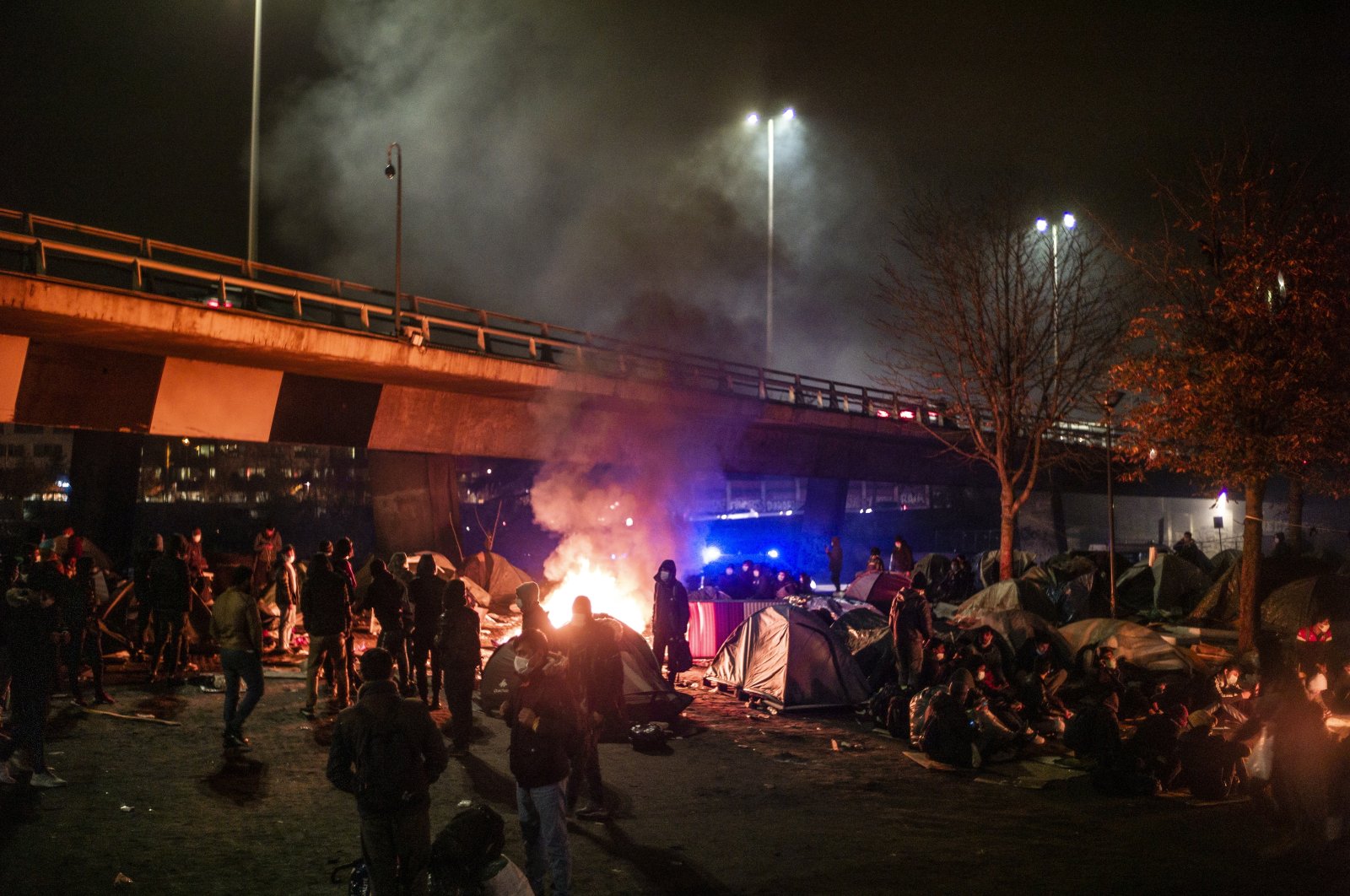 Migrants set fire to their belongings as they wait to be evacuated by French police at a makeshift migrant camp under the A1 freeway, Saint-Denis, north of Paris, France, Nov. 17, 2020. (EPA Photo)
by Daily Sabah with AFP Nov 24, 2020 2:30 pm

Just a week after hundreds of migrants were left homeless in central Paris, French police on Monday night cleared a makeshift migrant encampment in the capital, leading to accusations of excessive force.

French Interior Minister Gerald Darmanin acknowledged that images showing the clearance late Monday were "shocking" and asked the city's police chief to submit a report. The rough evacuation came a day before the French parliament's vote on a draft law meant to expand some police powers and provide greater protection for law enforcement. It notably makes it a crime to publish images of police officers with the intent to cause them harm, a measure that has prompted repeated protests by civil liberties campaigners and media freedom groups.

Officers used tear gas to dismantle the Paris camp, which was set up to protest earlier forced evacuations of hundreds of migrants from other camps. Volunteers had helped set up about 500 blue tents at Republic Square that were quickly filled by migrants, the majority from Afghanistan. Police arrived shortly afterward to remove the tents, sometimes with people still inside, amid protests from migrants and jeers from activists.

"They are too violent," said Shahbuddin, a 34-year-old Afghan told Agence France-Presse (AFP), crying after being evicted, "We just want a roof." Police later used tear gas and rough tactics, with videos posted on social media showing one officer tripping a man as he ran, and another officer slamming into a man who tried to intervene.

French Democratic Confederation of Labour (CFDT) union chief Laurent Berger told France 2 TV that the actions of the police were "scandalous and astounding," as quoted by AFP. "People occupy a square peacefully with tents, simply because they have a housing problem. They are not harming anyone. And there is this intervention which is totally disproportionate," he said.

Last week, another video of migrants being hounded by French police as they tried to get some sleep in a park in the northern suburb of Saint-Denis after their camp was torn down prompted outrage from rights groups. Many migrants lack permanent or safe housing in France, despite coronavirus fears and nationwide regulations implemented to curb the pandemic.

The question of police violence in France has entered the mainstream since the yellow vest protests. The French government has been confronted with a stream of shocking social media videos that showed excessive use of force by police against protesters. In the wake of George Floyd’s death at the hands of American police and the global protests it unleashed, the French government has been under growing pressure to address long-running accusations of excessive police violence, particularly against minorities. Police have cleared dozens of similar sites in recent years around Paris.

Police have cleared dozens of similar sites in recent years around Paris. After the French government's efforts to finish demolishing the almost-deserted Calais migrant camp in 2016, France has been hit by a major crisis as the number of migrants living in tent camps on the streets of Paris increased unabatedly, revealing the miserable conditions of migrants in the French capital. The illegal Paris and Calais camps, home to more than 10,000 migrants who are being put in smaller but less ramshackle lodgings, have come to symbolize Europe's fraught endeavors to deal with a record influx of migrants from war zones in Asia, the Middle East and Africa.