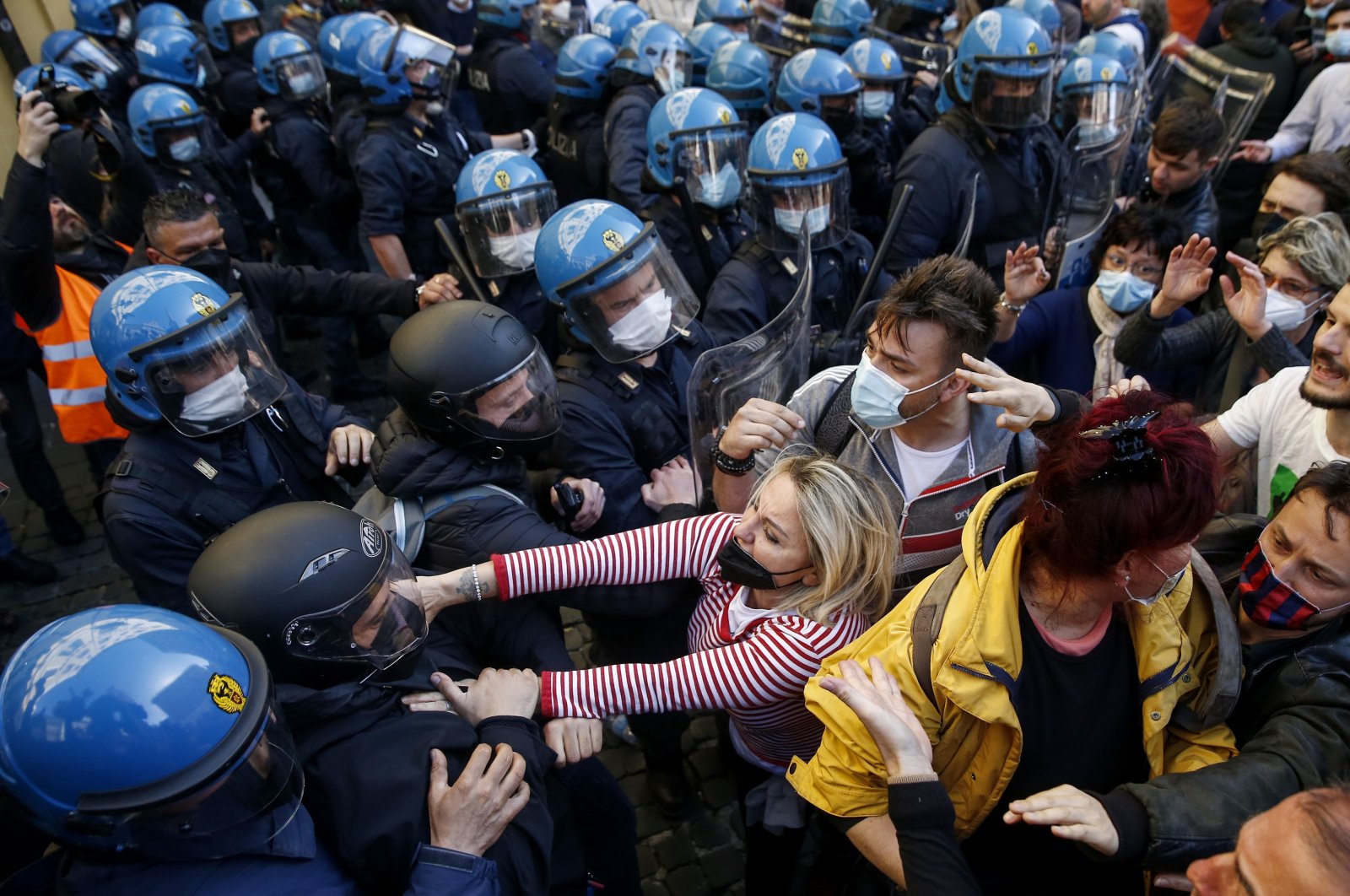 Demonstrators scuffle wit Italian Policemen in riot gear outside the lower Chamber during a protest by restaurant and other business activity owners in Rome, Tuesday, April 6, 2021. (Lapresse Via AP)
by ASSOCIATED PRESS Apr 06, 2021 8:24 pm
RECOMMENDED

Restaurant owners and others protesting against pandemic lockdown measures in Rome clashed with Italian police Tuesday near the parliament building.

One officer was injured in the scuffling, the Italian news agency LaPresse said.

Many in the crowd of a few hundred protesters lowered their protective masks to shout “Work!” and “Freedom!” Some hurled smoke flares or other objects.

Dining and drinking at restaurants, bars and cafes are currently banned through at least April. Only takeout or delivery services are permitted.

Officers charged the protesters after they tried to breach a police cordon. Members of a far-right political group joined the business owners in the protest, according to the Italian news agency ANSA.

Among the demonstrators was Hermes Ferrari, owner of a restaurant in Modena, a city in northern Italy. He boasted that he has defied authorities for months in opening his establishment to diners in breach of government decrees. Even as the fines piled up, "I was able to pay my workers,” Ferrari said, by keeping the business open.

Ferrari shouted to fellow restaurant owners at the protest to follow his lead. “You have to open because nobody can tell you to close,” he yelled.

Italy's current and previous governments have allocated millions of euros in aid to categories particularly hard-hit by pandemic restrictions.

The business owners insist they need to reopen permanently. Restaurants and cafes in regions with lower incidence of cases and less critically impacted hospital ICUs – earning so-called ‘’yellow-zone" status – have been allowed at times to have sit-down dining and drinking before evening hours.

But a current surge in infections, driven mainly by virus variants, has seen daily new caseloads in the tens of thousands and hundreds of COVID-19 deaths a day now for months. That prompted the government to temporarily eliminate ‘’yellow zone" designation from before the Easter holidays through the rest of April.

Still, Sibilia, from the populist 5-Star Movement, called on the government, besides concentrating on the vaccine rollout, to provide “immediately, new compensatory funds for economic activities closed or penalized by the recent restrictions.”

Sibilia also pressed for government guarantees of loans, a moratorium on mortgage payments, a stop to evictions, and compensation for income lost due to COVID-19 measures.