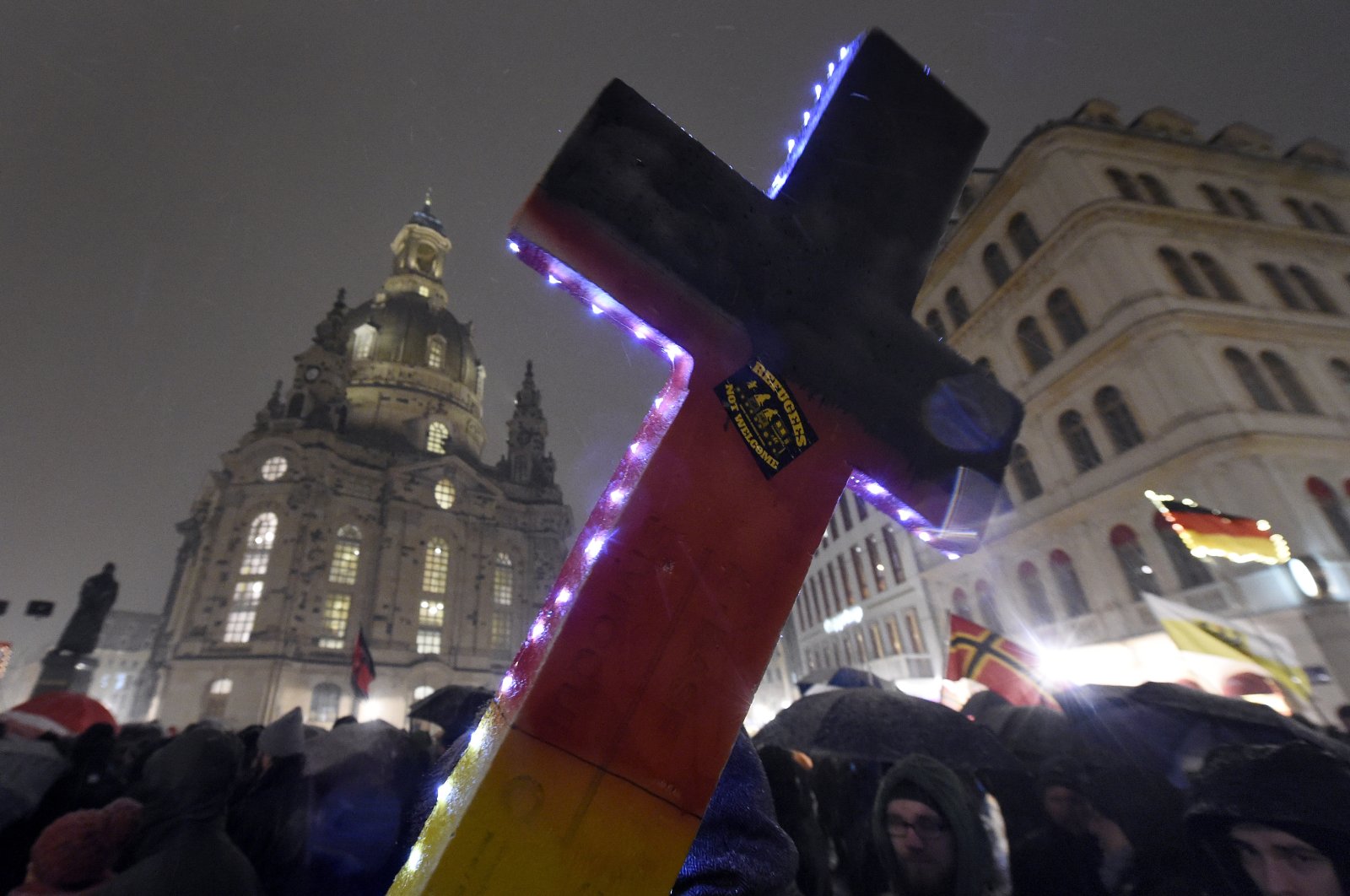 An illuminated cross with a sticker reading "refugees not welcome" is pictured during a demonstration of PEGIDA close to the Frauenkirche church in Dresden, eastern Germany, Feb. 29, 2016. (AP Photo)
by French Press Agency - AFP May 07, 2021 2:34 pm
RECOMMENDED

German intelligence services will intensify the surveillance of the anti-Muslim movement Pegida, which has become "extremist" and "anti-constitutional."

While Pegida had previously attracted "heterogeneous" support and taken "moderate" positions, it had developed "an increasingly right-wing extremist orientation," the Saxony State Office for the Protection of the Constitution (LfV) said in a statement Wednesday.

He added that "all people and activities" within the group would now be put under surveillance, with the exception of those merely taking part in peaceful demonstrations.

Pegida, which campaigns against what it calls the "Islamization of the West," was born in October 2014, holding xenophobic marches every Monday evening.

Its protests gained momentum during the refugee crisis of 2015 when Germany became deeply polarized over Chancellor Angela Merkel's decision to keep the country's doors open to hundreds of thousands of asylum-seekers, many from Iraq or Syria.

The movement's popularity coincided with the rise of the far-right Alternative for Germany (AfD) party, which entered parliament for the first time in 2017 on an anti-refugee and anti-immigration platform.

Pegida has previously been declared as extremist and put under observation in other German states such as Bavaria.

One of its leading members, Lutz Bachmann, has faced multiple convictions for sedition, most recently in December 2020.

Germany's domestic intelligence agencies monitor a range of individuals and groups from across the political spectrum who are suspected of extremist tendencies.

In a move later blocked by Germany's Constitutional Court, the national intelligence service BfV said in March that it was placing the entire AfD party under surveillance for posing a threat to democracy.

Two weeks ago, the agency said it would also monitor members of the so-called "Querdenker" (Lateral Thinkers) movement, which has emerged as the loudest voice against coronavirus curbs and an active promoter of conspiracy theories that deny basic facts about the pandemic.