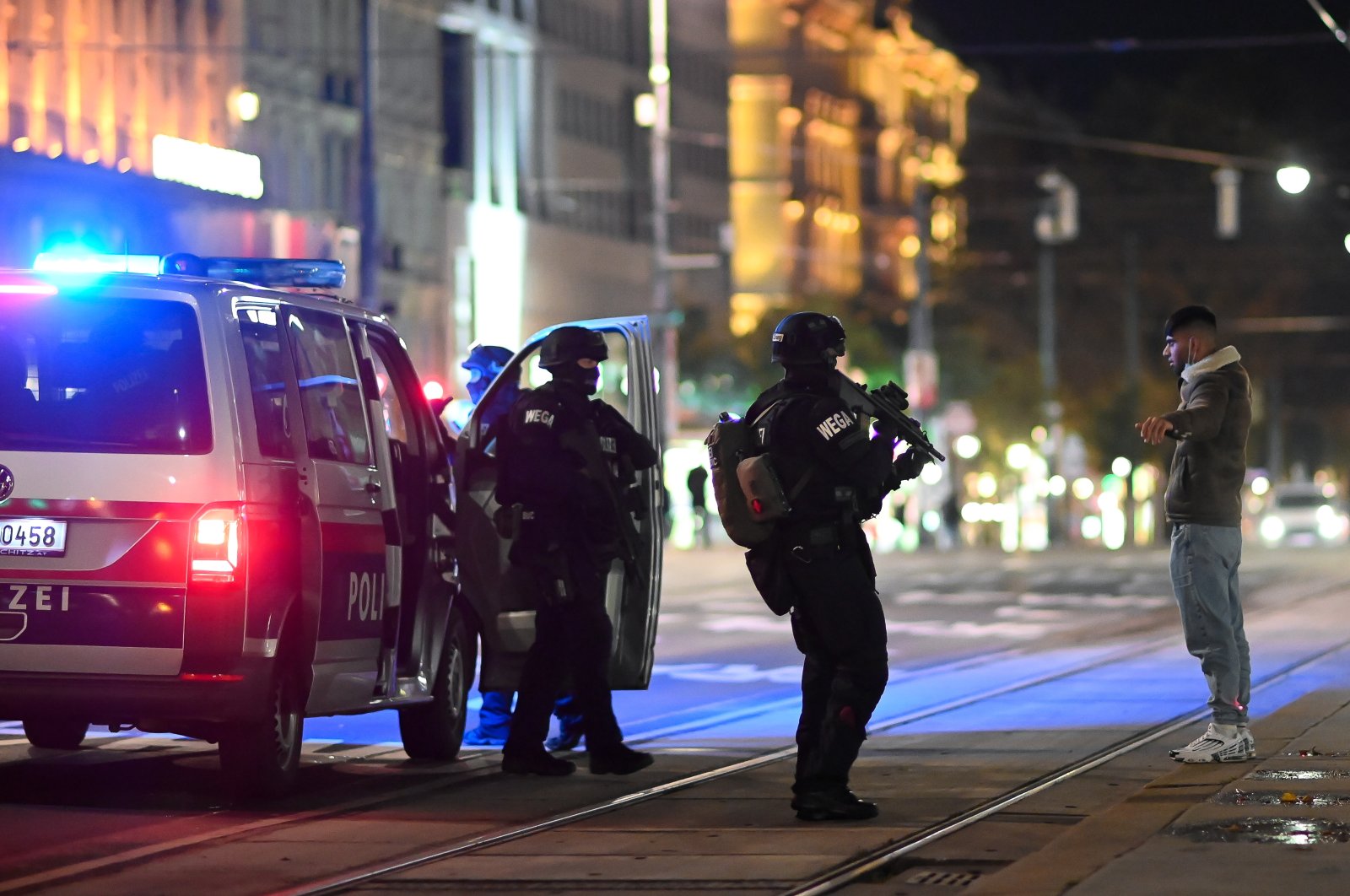 Austrian police special forces search a civilian infront of The Wiener Staatsoper (Vienna State Opera) after a shooting near the Stadttempel' synagogue in Vienna, Austria, 02 November 2020. (EPA Photo)
by Agencies
Nov 03, 2020 1:43 am

Several suspected perpetrators of what the Austrian government is calling a terror attack in Vienna are on the loose and a manhunt is under way, Interior Minister Karl Nehammer said on Monday, calling the attackers "heavily armed and dangerous."

"We have brought several special forces units together that are now searching for the presumed terrorists. I am therefore not limiting it to an area of Vienna because these are mobile perpetrators," Nehammer told broadcaster ORF, urging the public to stay indoors until the all-clear is given.

Several gunmen fired shots at six locations in central Vienna starting near the central synagogue earlier on the same day, killing at least one person and wounding others in what the interior minister said appeared to be a terrorist attack.

A large area of central Vienna was cordoned off. Police said a significant deployment was under way and that they had shot dead one of the suspects. They urged people to stay inside.

Interior Minister Nehammer told Austrian broadcaster ORF that the attack was believed to have been carried out by several people and that all six locations were in the immediate vicinity of the street housing the central synagogue.

"At the moment I can confirm we believe this is an apparent terror attack," he said.

"We believe there are several perpetrators. Unfortunately there are also several injured, probably also dead."

Police said on Twitter that at least one person had been killed and several injured, including a police officer. ORF reported that 15 people were being treated for injuries in Vienna hospitals, and that seven were in serious condition.

Authorities gave no indication of the identity of the assailants or reason for the attack.

President Emmanuel Macron of France, which has seen two deadly knife attacks in Paris and Nice in recent weeks, issued a statement expressing shock and sorrow.

"This is our Europe," he said. "Our enemies must know with whom they are dealing. We will not retreat."

French officials have ramped up security after the attacks in Paris and Nice, which had suspected extremist motives. Macron has deployed thousands of soldiers to protect sites such as places of worship and schools, and ministers have warned that other terror attacks could take place.

Jewish community leader Oskar Deutsch said on Twitter that it was not clear whether the Vienna synagogue and adjoining offices had been the target of the Vienna attack, and said they were closed at the time.

Videos circulated on social media of a gunman running down a cobblestone street shooting and shouting. Reuters could not immediately verify the videos.

In 1981, two people were killed and 18 injured during an attack by two Palestinians at the same synagogue. In 1985, a Palestinian extremist group attacked Vienna airport with hand grenades and attack rifles, killing three civilians.

In recent years, Austria has been spared the sort of large-scale attacks seen in Paris, Berlin and London.

In August, authorities arrested a 31-year-old Syrian refugee suspected of trying to attack a Jewish community leader in the country's second city Graz. The leader was unhurt.