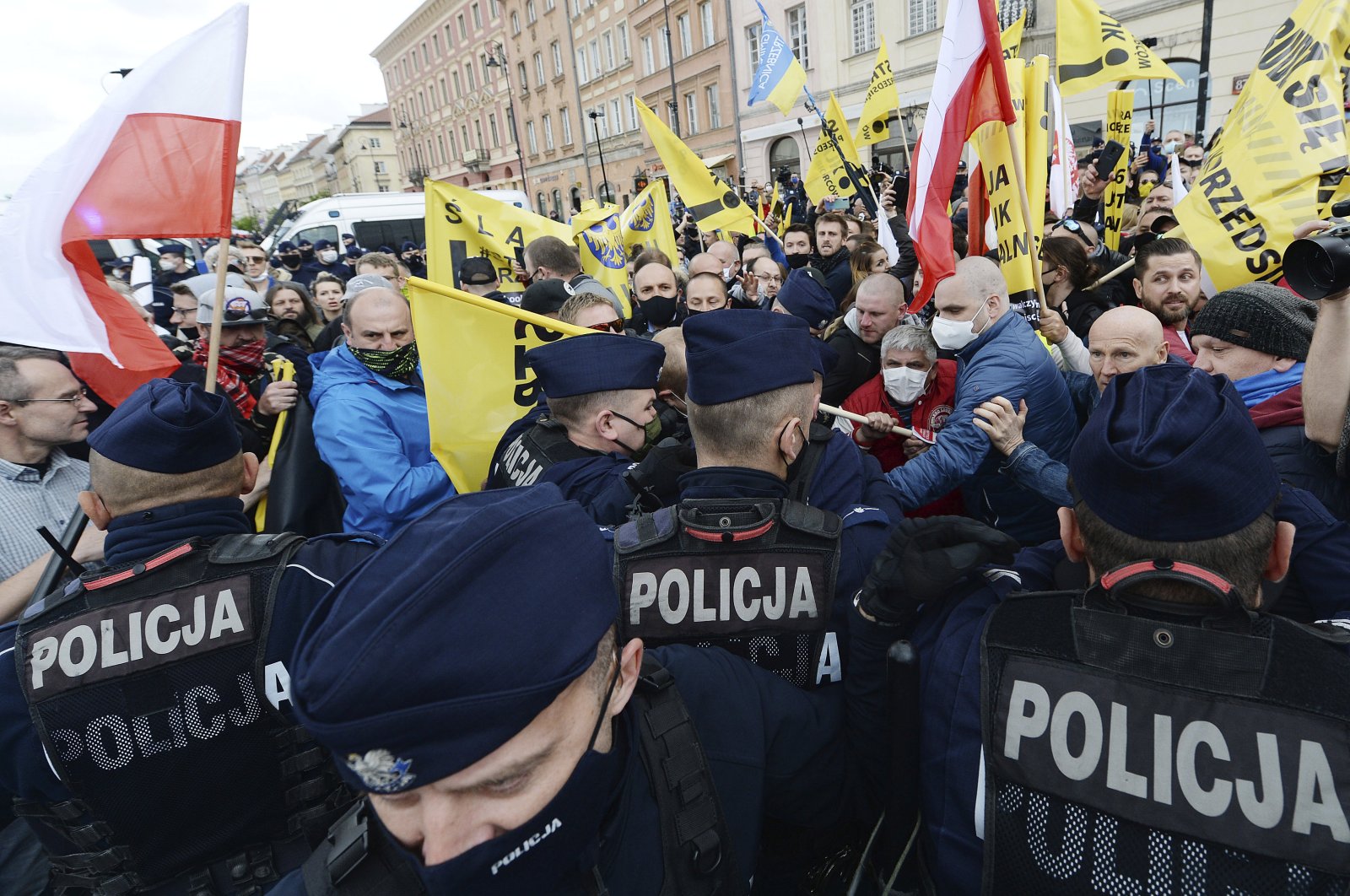 Police clash with protesters demanding an end to economic restrictions during the coronavirus pandemic in Warsaw, Poland, Saturday, May 16, 2020. (AP Photo)
by ASSOCIATED PRESS May 16, 2020 8:29 pm
RECOMMENDED

Demonstrations took place Saturday in several European cities against restrictions aimed at controlling the spread of the novel coronavirus, with tear gas used on protesters in Poland and arrests made at a gathering in London’s Hyde Park.

Police in several German cities enforced distancing rules as thousands of people gathered to express a mix of frustrations – at restrictions battering the economy and a perceived loss of civic freedom. In some places, people also voiced conspiracy theories and anti-vaccine views.

Police in Stuttgart said that the permitted number of 5,000 demonstrators was exceeded and directed arriving participants to another open space. Police said there were enforcing a mask requirement under threat of a 300 euro ($325) fine.

The permitted number of 1,000 protesters was reached in Munich on the Theresienwiese event grounds, site of the now-canceled Oktoberfest beer festival. It was one of a number of gatherings across the southern state of Bavaria.

Several dozen people protested anti-virus rules to loud music in Berlin in a taped-off demonstration area on the central Alexanderplatz square, overseen by 1,000 police who enforced a 1.5-meter (6-foot) distancing requirement and a ban on more than 50 people in one place, the German Press Agency (DPA) reported. Among the permitted protest groups were several dozen counter-protesters denouncing conspiracy theories and supporting the rights of migrants.

Germany and other countries have started to loosen some of the restrictions on movement, gatherings and businesses under restrictions on numbers of customers and spacing of seating. Retailers and restaurants have been hard hit and face uncertain futures. Germany's professional soccer league resumed matches on Saturday in stadiums without spectators.

Dozens of people, including a senator, were detained during a protest by business owners in the Polish capital against coronavirus restrictions, while police used tear gas against protesters. The city of Warsaw said the gathering was illegal because it had not been previously approved.

Jacek Bury, a senator for the opposition Civic Platform party, said he was hurt by police when trying to defend another protester. Warsaw police said they faced cases of "aggression against police officers.” Police denied using force against Bury.

In Britain, anti-lockdown and anti-vaccine protesters held a gathering in Hyde Park in central London and were met by a heavy police presence.

The protesters chanted "Freedom” and held handmade placards. Some sat on the grass and had picnics while observing social distancing guidelines while others ignored the rules and gathered in groups.

Officers tried to disperse the groups, threatening them with fines if they didn’t comply. They arrested 13 people, the London Metropolitan Police Service said.

This is the first weekend since the British government eased lockdown rules for England, allowing people to spend more time outdoors. Activities they’re now allowed to do include having a picnic and they are also allowed to meet one other person from another household as long as social distancing is obeyed.