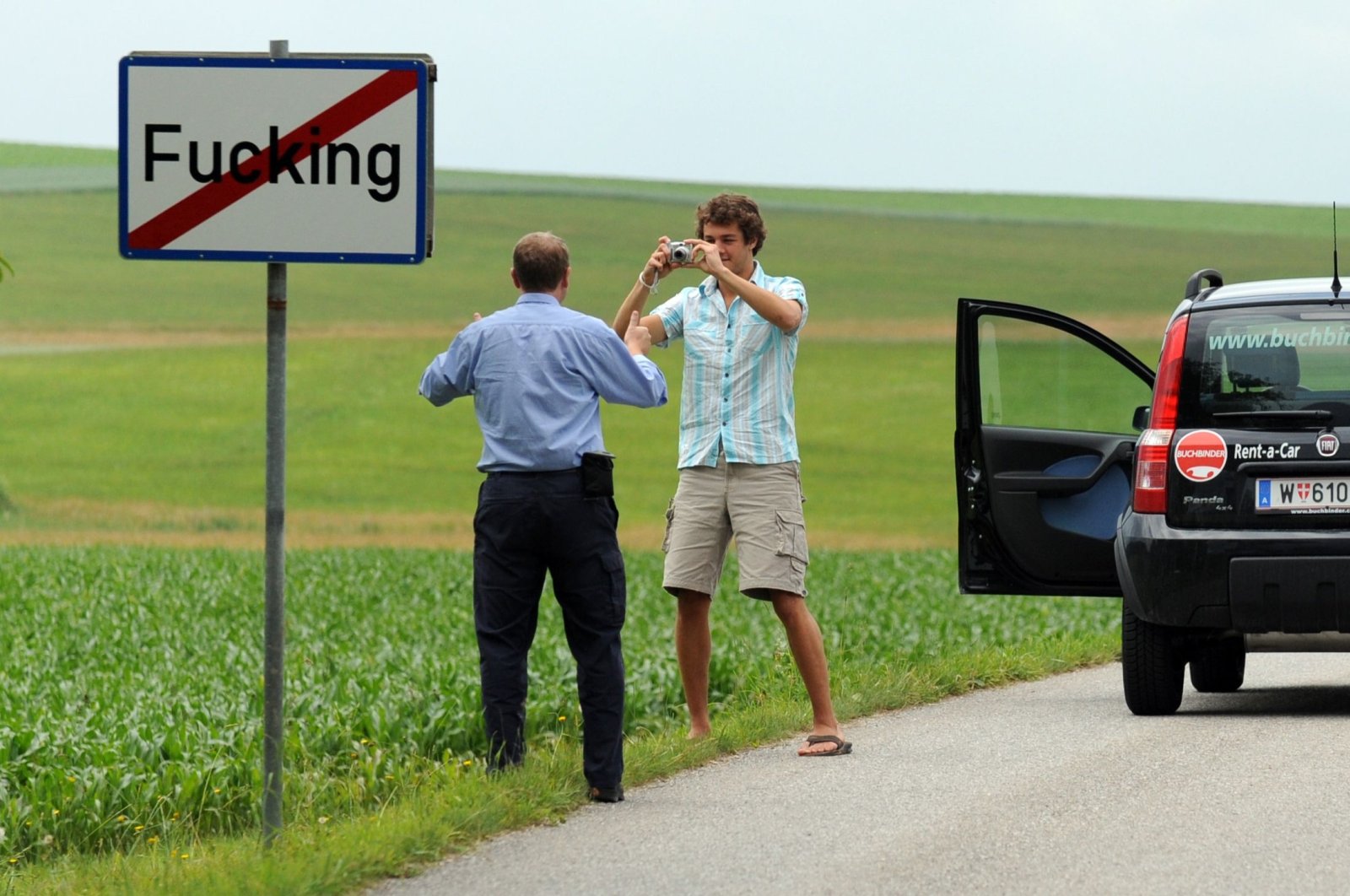 This file photo shows tourists taking pictures of the road sign of the village of Fucking, some 35 kilometers north of Salzburg, Austria, June 18, 2008. (AFP Photo)
by Daily Sabah with AFP Nov 27, 2020 3:15 pm
RECOMMENDED

Residents of an Austrian village will ring in the new year under a new name – Fugging – after ridicule of their signposts, especially on social media, became too much to bear.

They finally grew weary of "Fucking," the town's current name which some experts say dates back to the 11th century.

Minutes from a municipal council meeting published Thursday showed that the village of some 100 people 350 kilometers (215 miles) east of Vienna will be named Fugging from Jan. 1, 2021.

Increasing numbers of English-speaking tourists have made a point of stopping in to snap pictures of themselves by the signpost at the entrance to the village, sometimes striking lascivious poses for posting on social media.

Some have reportedly even stolen the signposts, leading the local authorities to use theft-resistant concrete when putting up replacements.

Finally, a majority of the villagers decided they had had enough.

"I can confirm that the village is being renamed," said Andrea Holzner, the mayor of Tarsdorf, the municipality to which the village belongs.

"I really don't want to say anything more – we've had enough media frenzy about this in the past," she told regional daily Oberoesterreichische Nachrichten (OOeN).

According to the Austrian daily Die Presse, the villagers, known as Fuckingers, "have had enough of visitors and their bad jokes."

But not everybody seems happy about the impending change.

"Don't people have any sense of humor these days?" asked one OOeN reader.

Another noted, "They're getting free publicity – they ought to have been happy to have a funny name."

Locals had previously found their village in the news after it was the backdrop for a book by Austrian novelist Kurt Palm which later was turned into a film.

The village was first officially inhabited from around 1070, but local lore suggests that a sixth-century Bavarian nobleman called Focko actually founded the settlement. A map dating from 1825 used the spelling Fuking.

Some 60 kilometers northeast, the villages of Oberfucking and Unterfucking near the town of Ansdorf are also worth mentioning, but no reports emerged that they would follow suit.

Just across the border in Bavaria, Germany, there is another village called Petting.

A similar name frenzy had taken place for the Southern Sudanese border town of "Um Dafuq," and "Am Dafok" in the Central African Republic, although no visitors were seen posting pictures from the remote and daunting area.