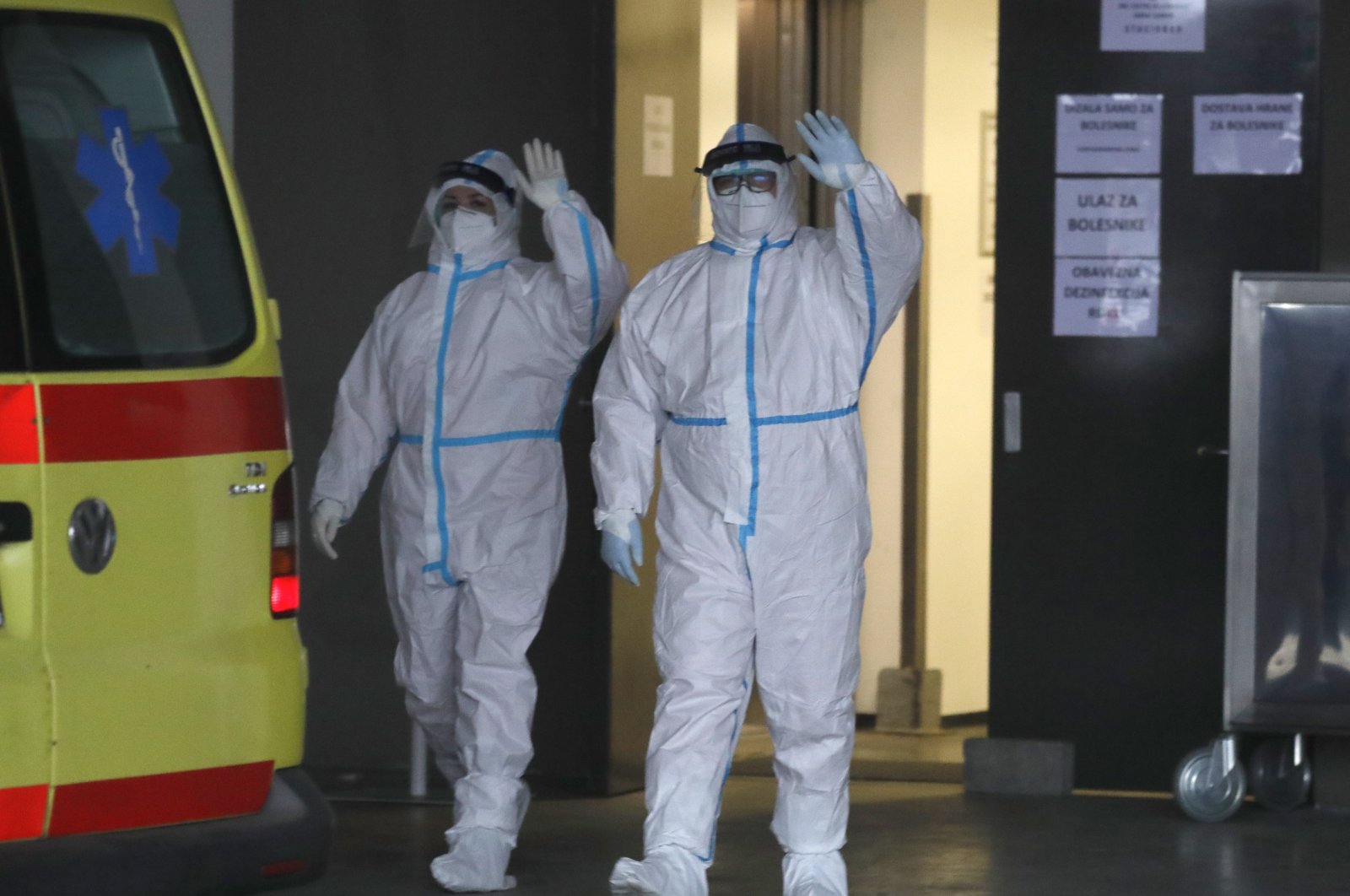 Epidemiologists together with the first patients arrive at a temporary COVID-19 hospital at the Sports and Concert Hall Arena Zagreb in capital Zagreb, Croatia, Nov. 28, 2020. (EPA Photo)
by Agencies
Nov 29, 2020 2:15 pm

Not enough beds and not enough doctors: a skyrocketing coronavirus caseload is pushing hospitals in the Balkans to the cusp of collapse, in chaotic scenes reminding some medics of the region's 1990s wars.

After nearly a year of keeping outbreaks more or less under control, the nightmare scenario that the Balkans feared from the start of the pandemic is now starting to unfold.

In hard-hit Bosnia, one doctor described the distress of having to juggle the care of multiple patients whose lives were hanging by a thread.

"The situation reminds me of the war, and I'm afraid it could get even worse during the winter," said the doctor, who requested anonymity, in an interview with Agence France-Presse (AFP).

"We can do the work of three (people) but not five."

The Western Balkans, one of Europe's poorest corners, has for weeks been battling an explosive coronavirus spike, its death toll doubling in the last month alone to reach nearly 10,000.

The crisis is exposing gaps in health care systems that have long suffered from low funding and a brain drain crisis, with an exodus of promising young doctors and nurses leaving to seek better wages and training abroad.

Even before the pandemic began, the Balkans had some of the lowest density rates of doctors in Europe, according to the World Health Organization (WHO) data.

In Serbia, some 2,000 medical workers have been forced to self-isolate just as medical wards are seeing a huge inundation of patients filling beds in the capital Belgrade.

"I never had such an experience in my professional career," said Rade Panic, the president of a Serbian doctors' union, in an interview with regional TV channel N1 on Friday.

"I didn't have room for patients that we medically consider young, I didn't have anywhere to transport them," said the anaesthesiologist, who works in the "red zone" of a hospital treating the most serious COVID-19 cases.

Bosnia, North Macedonia and Montenegro are all in Europe's top 10 when it comes to the highest per capita death rates on the continent.

Yet governments in the region have been reluctant to return to the drastic lockdowns imposed at the start of the pandemic, instead opting for lighter restrictions such as early closure of restaurants.

While Serbia is racing to build two brand new hospitals, Kosovo is considering adapting old hotels into makeshift wards, including the Grand Hotel in downtown Pristina.

Overflowing clinics in Pristina mean that some patients, such as 33-year-old Veprim Morina, are being turned away.

The doctor "told me to take my medication at home since the hospitals are full," the fitness instructor told AFP.

Morina managed to hire a nurse to provide treatment at home – an option those who can afford it are opting for when possible.

Getting a hospital bed now requires having "connections," he said.

"You have to be very lucky to find a place."

In neighboring North Macedonia, the government is marshaling private clinics and their staff to treat COVID-19 patients after public hospitals hit full capacity.

"We have been providing new beds, but it is harder and harder," Health Minister Venko Filipce said last week.

Outside clinics in the capital Skopje, relatives of patients bring food and sometimes even medicine to their loved ones.

"Catastrophic. Unorganized. No one answers the phone for hours," said one man seeking information on his sick relative.

"They (medical staff) are fighting, giving their best, but they simply cannot do everything."

In Bosnia, shops, restaurants and gyms all remain open while Serbia recently cut hours for businesses but has stopped short of an all-out closure.

While progress on vaccines is giving doctors hope, they fear the chaos that could unfold in the meantime.

"I don't understand why the authorities don't put in place more restrictive measures," said Jasmina Smajic, a doctor in the Bosnian city of Tuzla.

"Something must be done about this if we want to prevent catastrophic consequences."

Croatian doctors have also warned of staff and equipment shortages.

More than 2,100 patients are currently hospitalized and 3,000 would push the health care system to "collapse," they say.

Experts say politicians have struggled to strike a balance between controlling the virus and protecting fragile economies.

"We are too poor that all (lockdown measures) be repeated twice," said Croatian economist Ljubo Jurcic.

Meanwhile, local media reported on Saturday that Croatian Prime Minister Andrej Plenkovic has gone into quarantine after his wife tested positive for the coronavirus.

The conservative premier tested negative for the virus, the Jutarnji List newspaper reported, citing a statement from the government.

Ana Maslac-Plenkovic was suffering light symptoms of COVID-19, the illness caused by the virus, and then took a test on Saturday morning, which came back positive.

Her husband was then automatically placed in a 10-day quarantine.

Due to increasing infection numbers, stricter measures to contain the coronavirus pandemic came into force in Croatia this week.

Restaurants and cafes were closed, and the obligation to wear masks is to be controlled more closely in the future. The government is planning drastic punishments for disregarding new rules, ranging from heavy fines to prison sentences.

Croatia on Saturday reported 3,987 new cases of the virus, according to health authorities.

A total of 25,357 people have been infected in the country, which has a population of almost 4 million. The death toll rose by 55 on Saturday to a total of 1,655.