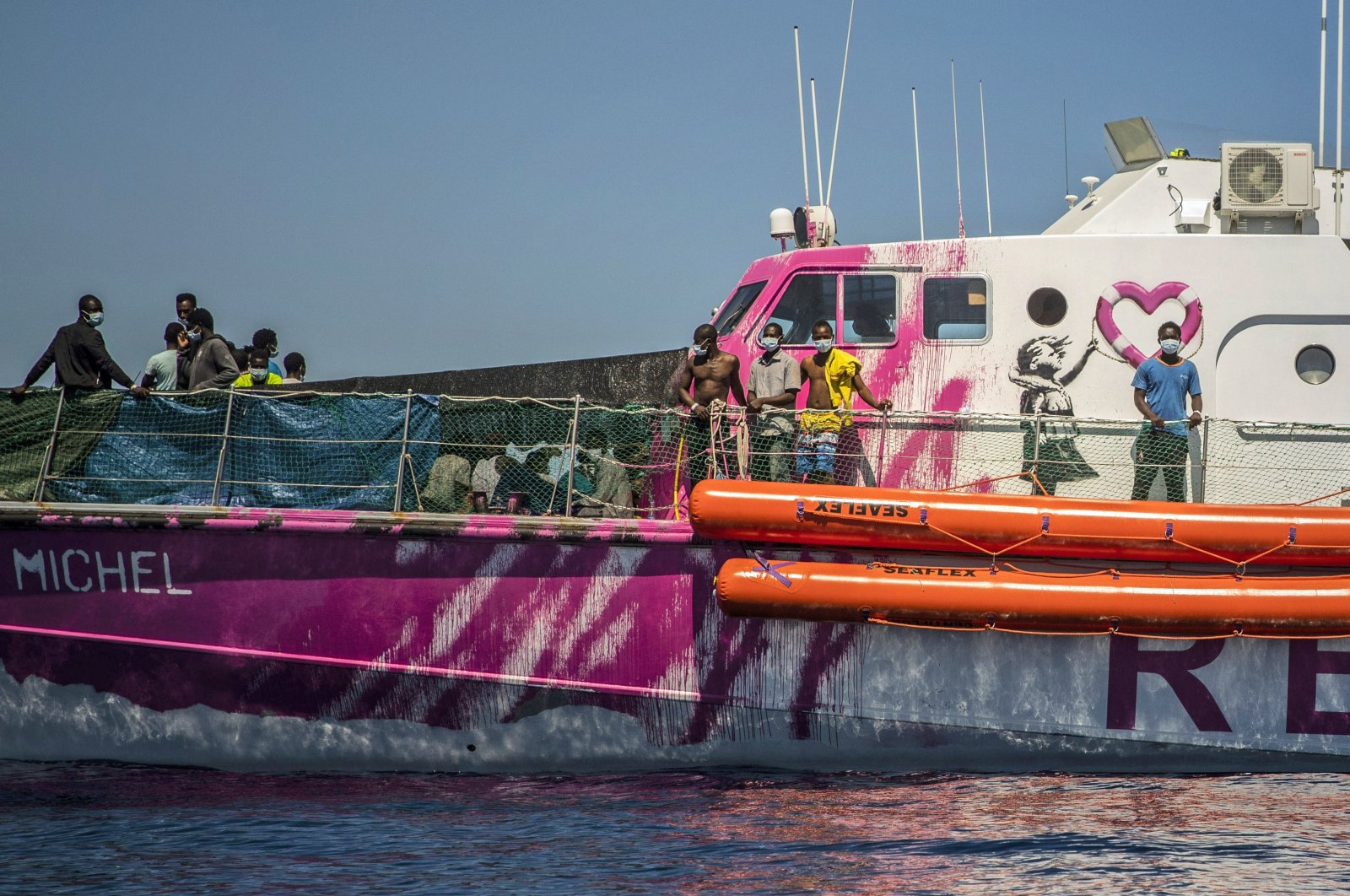 People stand on the deck of the Louise Michel rescue vessel, a patrol boat manned by activists and funded by the renowned artist Banksy in the Central Mediterranean sea, at 50 miles south from Lampedusa, Friday, Aug. 28, 2020 (AP Photo)
by German Press Agency - DPA Aug 29, 2020 3:24 pm
RECOMMENDED

"A crew of 10 is now onboard a 30-meter ship with 219 survivors. 33 are still on a liferaft + 1 deceased person in a body bag," a Twitter account for the Louise Michel vessel said.

The ship "is unable to move, she is no longer the master of her maneuver, due to her overcrowded deck and a liferaft deployed at her side," another message said.

The German-flagged vessel said it launched a Mayday request on Friday at 7:40 p.m. (5:40 p.m. GMT) and spent the following hours trying to contact Italian, Maltese and German rescue authorities.

After a series of "no answers" or "no duty officer available" messages, Maltese authorities called at 11:40 pm saying they could not send assistance as they were "all busy with other cases," the ship's Twitter account said.

The Louise Michel said it started its operations last week. Of the people it currently has on board, 89 were rescued on Thursday, and 130 on Friday.

The vessel is painted pink and is named after a 19th-century French anarchist and feminist who fought to defend the short-lived Paris Commune in 1871 and advocated class warfare.

On its website, the Louise Michel says it was bought with proceeds from the sale of a Banksy artwork, which the British artist donated to the project.

Banksy decorated the vessel with the image of a girl holding a heart-shaped buoy. The artist, whose identity remains a mystery, is famous for highlighting social issues in his work.

In an Instagram video, Banksy said he had "bought a yacht" and converted it into a lifeboat "because EU authorities deliberately ignore distress calls from 'non-Europeans.'"

His video ended with the message "All Black Lives Matter."

Meanwhile, the International Organization for Migration (IOM) and the UN Refugee Agency (UNHCR) called for the "immediate disembarkation" of the Louise Michel migrants and more than 200 others also stuck at sea.

"The lack of agreement on a regional disembarkation mechanism, long called for by IOM and UNHCR, is not an excuse to deny vulnerable people a port of safety and the assistance they need, as required under international law," the two UN agencies said jointly.

They mentioned the Louise Michel, but also the 27 migrants stuck since early August on the Maersk Etienne, a Danish tanker, and 201 migrants on the Sea-Watch 4, a German charity vessel.

Standoffs over migrants rescued in the central Mediterranean have been playing out for years, with Italy and Malta usually reluctant to take them in.

The two countries have long said they are disproportionately affected by Europe-bound migration from North Africa by sea, and that there is insufficient burden-sharing across the European Union.

Both countries' positions have hardened in the wake of the coronavirus pandemic, amid concerns about the risk of infection from migrants.

Amid the latest stalemate, Sea-Watch wrote on Twitter that its Sea-Watch 4 vessel was on its way to help the Louise Michel, but would take hours to get there.

"#SeaWatch4 – still over 4h away – has changed course and set sail to assist. Why? Because European authorities are denying assistance once again. Shame on the #EU!" it said.