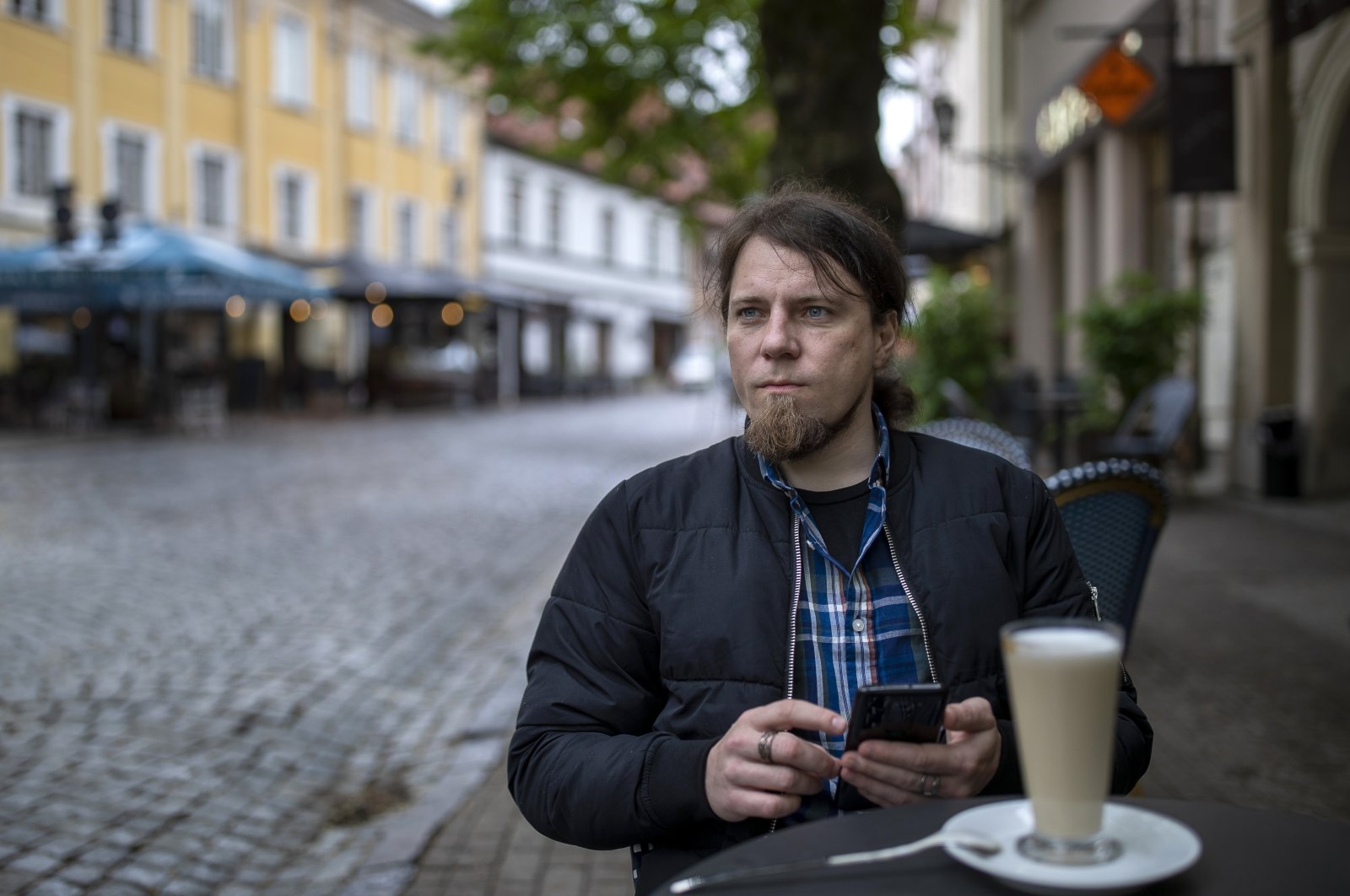 Viachka Krasulin, who fled Belarus after police arrested and beat him during demonstrations against authoritarian President Alexander Lukashenko in August 2020, sits at a cafe in Vilnius, Lithuania, May 19, 2021. (AP Photo)
by ASSOCIATED PRESS May 27, 2021 12:44 pm
RECOMMENDED

Viachka Krasulin said he was arrested and brutally beaten all over his body by police in Belarus for attending a rally in August 2020 that challenged the results of an election keeping authoritarian President Alexander Lukashenko in power.

Krasulin said security forces threatened to sexually assault him with a truncheon for joining the protest. After he complained to authorities about the police actions, they initiated a criminal case against him – rather than the security forces – and he decided to flee to neighboring Lithuania.

Until this week, he and other Lukashenko opponents had thought they were safe from the sweeping government crackdown by moving to nearby European Union countries.

Now they are not so sure. On Sunday, Belarus diverted a jetliner carrying dissident journalist Raman Pratasevich to land in Minsk, where he was arrested. And Lukashenko has vowed to hunt down those who oppose him, even if they move abroad.

“I was a hostage of Lukashenko’s regime, but now the entire E.U. is in the same situation,” said Krasulin, a 32-year-old ethnographer and musician. “Torture, brutal repressions and a hunt for journalists have spilled out of Belarusian borders and become a problem for all of Europe.”

The Ryanair jet was traveling from Greece to Lithuania – both members of the European Union – when Belarusian flight controllers ordered it to land in Minsk because of a bomb threat, and Lukashenko scrambled a fighter jet to escort it. Once the plane was on the tarmac, security agents seized Pratasevich and his Russian girlfriend and took them into custody.

Pratasevich, 26, ran a popular messaging app channel that helped organize protests against Lukashenko, and he had fled abroad in 2019. He was on a Belarusian list of suspected “terrorists” and was charged in absentia with staging mass disturbances.

The rallies against Lukashenko, in power for more than a quarter-century, lasted for months after his Aug. 9 reelection to a sixth term in the vote that the opposition rejected as rigged. The 66-year-old leader responded by arresting more than 35,000 people, with thousands reported beaten.

Now living in Vilnius, Krasulin shuddered as he recalled his own arrest Aug. 11.

He had tried to help a protester hit by a police rubber bullet when he was dragged into a police van, where he and others were beaten with clubs. Officers singled him out because of his looks, he claimed.

“They clearly didn’t like my long hair – they were beating me and threatened to rape me with a truncheon, but first they decided to cut my hair,” he said. “They raised me by the hair and cut it with an army knife.”

The beatings continued in jail, where Krasulin and hundreds of others were kept for 24 hours without food or water, packed in a cell that had six beds for 40 people. He was denied access to a lawyer and sentenced to 11 days.

After his release, he allowed doctors to document the marks on his body from the beatings. Nine months later, he still suffers from neck pain due to nerve damage.

Krasulin demanded that Belarusian authorities investigate the beatings and threats by security forces. Instead, they opened a case against him on charges of involvement in protests, and he fled to Lithuania to escape imminent arrest. Thousands did the same.

Vilnius has become the main hub for the opposition, hosting activists, human rights campaigners, journalists and even an entire Belarusian university in exile.

Many of them were scared by the diversion of the Ryanair flight, shortly before it was to cross the Lithuanian border, and Lukashenko fed that fear Wednesday by warning his foes living abroad that the authorities will pursue them.

“We know your faces, and it’s just a matter of time for you to be brought to account before the Belarusian people,” he said in a speech.

Sviatlana Tsikhanouskaya, Lukashenko’s main opponent in the election who moved to Lithuania days after the vote under official pressure, said she had taken the same flight as Pratasevich, from Athens to Vilnius, but a week before him.

“A regime has emerged in the center of Europe that openly spits on all norms and rules, transforming Belarus into a black spot,” she said.

A day after his arrest, Pratasevich was shown on Belarusian state television confessing to organizing disturbances. His mother said his nose appeared to have been broken and heavy makeup applied to his face to cover up bruises, and his father said the confession probably was coerced.

“Pratasevich's demonstrative arrest was intended to remind journalists and bloggers who have fled the country that the KGB has long hands, and it’s too early for them to relax,” said lawyer Siarhej Zikratski, referring to the Belarusian state security agency that still goes under its Soviet-era acronym.

Zikratski, who defended Belarusian journalists targeted by the authorities, fled to Vilnius this month with his wife and two daughters after being stripped of his law license.

“What is going on in Belarus can be called a legal default – laws no longer work there,” he said. “Today a lawyer risks finding himself in the same cell with his clients simply for carrying out his professional duties.”

Pratasevich's 23-year-old Russian girlfriend, Sofia Sapega, who was taken off the jet and arrested with him, was studying at the European Humanities University that relocated to Vilnius from Minsk in 2005, following a conflict with authorities.

“Lithuania has become a safe haven for thousands of Belarusians,” said Maksimas Milta, a university representative. “Lithuania hadn’t seen such a massive exodus from Belarus any time before.”

Sapega also was shown on Belarusian TV confessing to investigators while in custody.

“Such KGB methods give an impression of what Belarusians have to face on a daily basis,” Milta added.

He noted that the EU decision to bar Belarus airlines from the bloc’s airspace and airports would make it harder for Belarusians to leave the country.

After Belarusian authorities restricted land travel amid protests last fall, air links were the last chance for Belarusians to leave, and the EU move will further limit their options.

“Millions of Belarusians can’t leave and they have practically become Lukashenko’s hostages,” said Krasulin, who makes a living by repairing church organs and occasionally working in construction. He hopes to return to Belarus someday.

“This absurdity in the center of Europe can’t last forever,” Krasulin said.