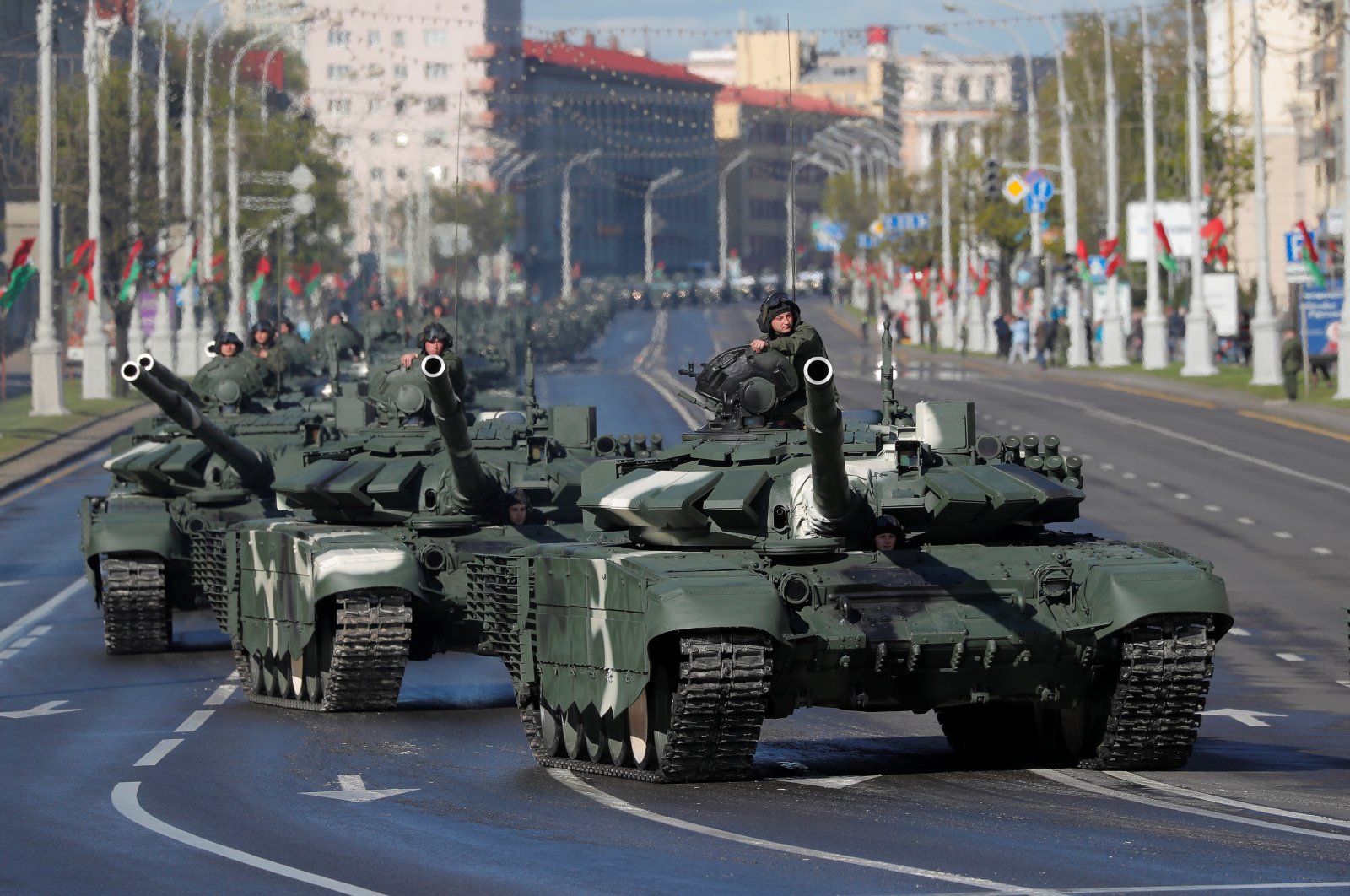 Belarusian servicemen drive tanks along the street before a rehearsal for the Victory Day parade, which marks the anniversary of the victory over Nazi Germany in World War Two, amid the coronavirus disease (COVID-19) outbreak in Minsk, Belarus May 8, 2020. (Reuters Photo)
by Agencies Aug 17, 2020 12:03 pm
RECOMMENDED

"We are witnessing Belarusian efforts to further escalate and develop a narrative about the so-called foreign threats," Defense Minister Raimundas Karoblis said in a statement to Agence France-Presse (AFP). He stressed that the Baltic nation was closely following the situation together with NATO allies.

"I can confirm the information that was announced yesterday by Belarus about military exercises beginning today close to the border with Lithuanian and Poland," the minister said.

"There are no reasons for military support from Russia, and no legal or other grounds for it. It would constitute an invasion into the country and would destroy the last traces of its independence," Linkevicius told reporters in Vilnius.

"Russia would risk a lot if it did it, in the face of what is going on in Belarus, in the face of popular support. It should figure out that an invasion would not be justified, neither legally, nor morally, nor politically," he added.

The Kremlin said that Russian President Vladimir Putin had told longtime Belarusian president that Moscow was ready to assist Belarus in accordance with a collective military pact if necessary. He also said external pressure was being applied to the country, although he did not say where from.

Belarus's defense ministry said Sunday that it would hold military exercises in Grodno region from Monday to Thursday. The military drills were announced after Lukashenko accused NATO of a military build-up in Lithuania and Poland near Belarus's western border.

NATO dismissed the allegation and Karoblis said it was nothing more than "an attempt to shift blame and justify its own actions," adding that "neither Lithuania nor NATO poses any military threat for Belarus."

On Monday Poland started to monitor the situation on its border with Belarus, Deputy Defense Minister Wojciech Skurkiewicz said.

"Neither Poland nor other Western European countries will get caught up in the intrigue Lukashenko is trying to plot," Skurkiewicz told public radio.

"We are looking at what is happening in Belarus, just like all NATO countries, and we will also look at what happens at our borders. We will not be passive in this observation," Skurkiewicz also said.

Polish officials have been discussing the situation in Belarus with the EU and the United States. Poland said that potential EU sanctions on Belarus should only be imposed on individuals responsible for the use of force and for organizing the election, which Warsaw believes will need to be repeated.

Poland's Deputy Foreign Minister Pawel Jablonski told Dziennik Gazeta Prawna daily that the EU should not impose sanctions on Belarus without presenting the country an alternative to its close ties with Russia.

"Of course this is not about immediately including Belarus into the orbit of EU associated countries, as it is too early for it... However, Belarus needs to have... the possibility of real cooperation with the EU countries," Jablonski said in an interview published on Monday.

Earlier, Germany's president urged the military in Belarus not to use violence as Belarusians protest against what demonstrators say was the fraudulent re-election a week ago of the country's longtime president.

"I urge the Belarusian military not to sin against their own people by using force," said Frank-Walter Steinmeier, whose post is largely ceremonial.

Steinmeier, who said he admired the demonstrators' courage, urged President Alexander Lukashenko to seek dialogue with them and said the people in Belarus deserved solidarity and support.

Britain's Foreign Secretary Dominic Raab said the world has watched with horror at the "violence used by the Belarusian authorities to suppress the peaceful protests that followed this fraudulent Presidential election."

"The U.K. does not accept the results," he added.

Meanwhile, Lukashenko said on Monday there would be no new presidential election despite calls from the opposition and nationwide anti-government protests, the Belta news agency reported.

"You should never expect me to do something under pressure," he was quoted as saying. "They (new elections) won't happen."

Lukashenko said that he would be willing to share power and to change the constitution, but that he was not prepared to do so under pressure from protesters, the Belta news agency reported.

According to him work was already underway on possible changes to the constitution that could redistribute power.

He also told thousands of workers who gathered outside a factory and the headquarters of state television in Minsk on Monday following a call from Belarus' opposition for a general strike over a disputed election that there would be no new presidential election after a disputed Aug. 9 vote "until you kill me."

"We held elections already. Until you kill me, there will be no other elections," Lukashenko was quoted by the Tut.by media outlet as telling workers at a tractor plant.

EU leaders will hold an emergency video talks on Wednesday to discuss the crisis in Belarus. The summit was called by EU Council President Charles Michel after Moscow said it was ready to provide military help to its ally Lukashenko.

Tens of thousands of people have taken to the streets to condemn Lukashenko's election win and a subsequent violent crackdown on protesters by riot police.

"The people of Belarus have the right to decide on their future and freely elect their leader," Michel tweeted. "Violence against protesters is unacceptable and cannot be allowed."

A European source said Michel decided to call the summit in view of the spike in tensions over the weekend. Lukashenko claimed victory in the August 9 election with 80% of the vote, despite wide opposition to his rule. The crackdown by security forces has seen more than 6,700 people arrested, hundreds wounded and two people killed.

EU foreign ministers on Friday agreed to draw up a list of targets in Belarus for a new round of sanctions in response to the crackdown and on Monday Germany, which currently holds the EU's rotating presidency, said it was ready to back even tougher measures.