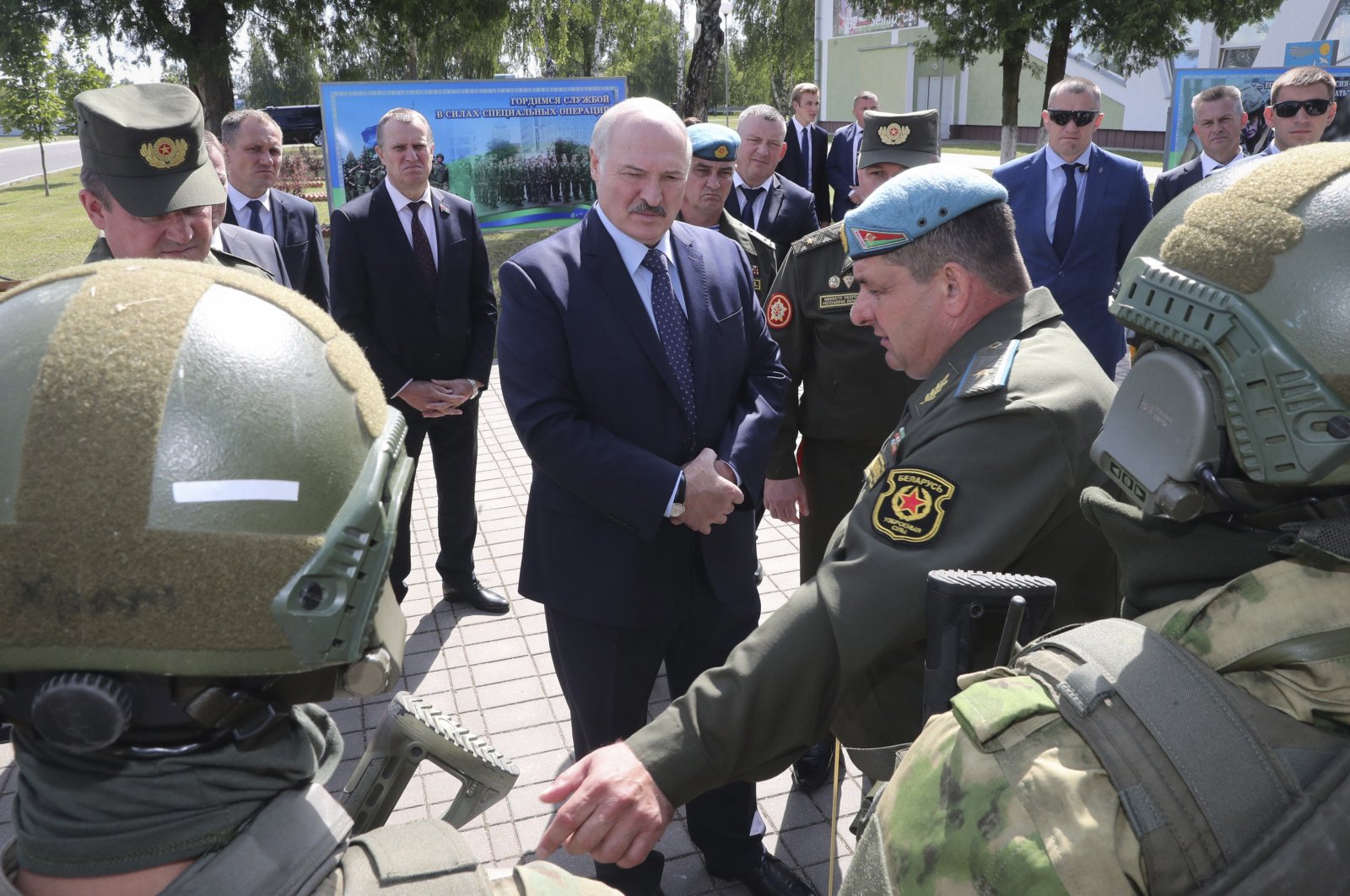 Belarusian President Alexander Lukashenko (C) inspects equipment and weapons of Belarusian army special troops as he visits a military base in the town of Maryina Gorka, 60 km (37 miles) southeast of Minsk, Belarus, July 24, 2020. (AP Photo)
by Agencies
Jul 30, 2020 11:50 am

Belarus and Ukraine have agreed to beef up their border controls and expand border cooperation after Belarus detained more than 30 alleged Russian mercenaries near Minsk ahead of Belarus' presidential election, the Belarusian foreign ministry said.

The move aims to prevent any attempts to destabilize the two countries, the Belarusian ministry said in a statement following a meeting with Russia's ambassador to Belarus and the acting Ukrainian ambassador there.

Belarus said Thursday it had opened a criminal probe into planned acts of terror by Russian mercenaries held ahead of presidential polls, adding that it was tracking down dozens more.

The former Soviet country's security services on Wednesday arrested a group of 33 Russian fighters as well as one other man in a different location.

Belarus security council chief Andrei Ravkov said a criminal probe had been launched and that the men face charges of preparing "terrorist acts."

"Thirty-three have been detained, there are up to 200 or thereabouts on the territory (of Belarus)," Ravkov said.

He said "a search is going on" to find the others, complaining that it was "like looking for needles in a haystack."

The arrests came ahead of presidential polls on Aug. 9 in which strongman Alexander Lukashenko is seeking a sixth term.

Lukashenko has detained would-be opposition candidates and their supporters.

Lukashenko has accused some of his critics of being controlled by "puppeteers" in Moscow.

The Kremlin Thursday said it was unaware of any illegal activity carried out by a group of alleged Russian mercenaries detained by Belarus on suspicion of plotting a violent attack in the run-up to an election.

Kremlin spokesman Dmitry Peskov said Moscow wanted an exhaustive explanation from Belarus about their detention and hoped their rights would be observed in full.

"We don't have information about any illegal activity carried out by them," said Peskov.

"We hope to receive information that will allow us to sort this out".

Ravkov spoke after meeting the candidates standing against Lukashenko, including Tikhanovskaya, and warning them that security measures would be stepped up at rallies.

State news agency Belta said the authorities had received information about the arrival of 200 fighters in Belarus "to destabilize the situation during the election campaign."

Lukashenko at an emergency meeting of his security council on Wednesday demanded an explanation from Moscow.

"If they are guilty, it's necessary to emerge out of this situation with dignity," Lukashenko said in televised remarks.

Russian Ambassador to Belarus Dmitry Mezentsev said Thursday that he had been invited to the Belarusian foreign ministry that morning to discuss the case, Russian news agencies reported.

Russia is Minsk's closest political and economic ally, but relations have been strained.

It also reported that the alleged militants gave themselves away because, unlike ordinary Russian tourists, they did not drink.

"They did not consume alcohol or visit entertainment venues. They kept to themselves in order not to attract attention," Belta said, adding that the men stayed at one of the country's spas.

National television showed several Russian passports that allegedly belong to the detained men, as well as stacks of dollar bills, packets of condoms and pieces of paper with Arabic script.

The men appeared to also have Sudanese pounds in their possession.

Russian author Zakhar Prilepin, who fought alongside Moscow-backed separatists in eastern Ukraine, said he knew some of the detained men.

Writing on Facebook, Prilepin suggested that the fighters probably used Belarus as a transit point and were en route to "some other destination," which he said Belarus "surely knows very well."

Unlike Russia, Belarus has not enforced a lockdown due to the coronavirus pandemic and operates flights as usual.