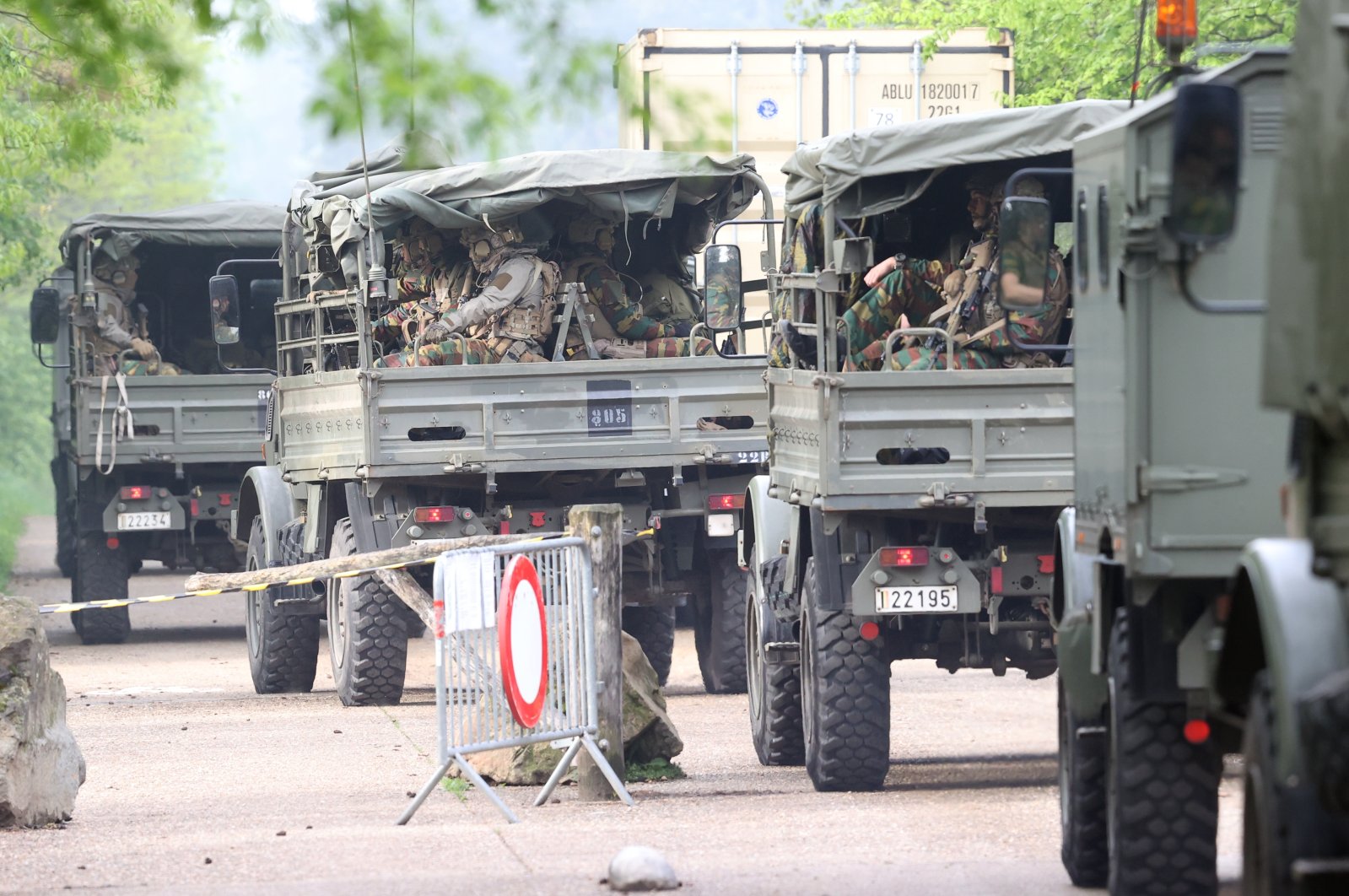 Soldiers in military trucks are deployed in the area where heavily armed and far-right linked Jurgen Conings is believed to be located, in the Limburg province, Belgium, May 20, 2021. (AA Photo)
by Agencies May 20, 2021 12:10 pm
RECOMMENDED

Threats made against a renowned coronavirus expert by a runaway soldier with far-right beliefs have alarmed authorities in Belgium, who are concerned he possesses heavy weapons, including rockets.

Late Wednesday, the federal prosecutor's office said some 250 police officers and soldiers had been deployed to a national park in the northeast where serviceman Jurgen Conings may be hiding.

The suspect's abandoned four-wheel drive vehicle was found near the park on Tuesday evening with "four anti-tank rocket launchers and some munition," the prosecutor's office said.

Conings, who on Twitter describes himself as a "Belgian Air Force soldier who likes fitness, body building and boxing", already featured on a list of extremists monitored by Belgium's anti-terrorist agency, the Coordination Unit for Threat Analysis.

The 46-year-old was one of around 30 Belgian military personnel with known extremist sympathies, officials said, but he remained on active duty, training Belgian troops ahead of deployment on overseas missions.

Prime Minister Alexander de Croo told Flemish broadcaster VTM it was "unacceptable" that the fugitive had been allowed to access the weapons, and Defense Minister Ludivine Dedonder said an inquiry would be launched.

"The real question is of course: how is this possible," asked De Croo.

Anadolu Agency (AA) reported that mosques near the city of Limburg were temporarily shut down over fears of a possible attack by Conings, while the Belgian police warned several mosques to keep their doors locked in during prayers.

A police wanted notice reveals that Conings is a thickset man with a shaved head. On his Twitter profile, he is stripped to the waist, showcasing his imposing physique.

A spokesperson for the prosecutors, Eric Van Duyse, told Agence France-Presse (AFP) the soldier was "well trained but seems to have ideas associated with the extreme right."

The man had disappeared with weapons, he said, and had left behind a letter containing "worrying elements" including threats to the state and public figures.

Justice Minister Vincent Van Quickenborne told VRT television: "There are signs that he is violent and, over the course of the past 24 hours, evidence has emerged that shows this man presents an acute threat."

Dutch police said they were monitoring the situation but had no reason to believe Conings had crossed the border.

Among the people Conings has threatened is Marc Van Ranst, a leading academic who has become a public figure in Belgium during the coronavirus crisis.

He is an active social media user and his views have made him a target of conspiracy theorists, COVID-19-skeptics and with the Flemish far-right.

In an interview with AFP in September, Van Ranst said he had fallen foul of the nationalists and received death threats after speaking out against racism and xenophobia.

"I couldn't stay silent about that and the right wing parties hate me," he said.

Already living under police protection, he and his family have been moved to a place of safety.

In particular, it noted that these groups are increasingly seeking weapons in order to prepare for violent action.

But it added: "The main threat comes from those individuals known as 'lone actors', who become radicalised and plan violent actions on their own."