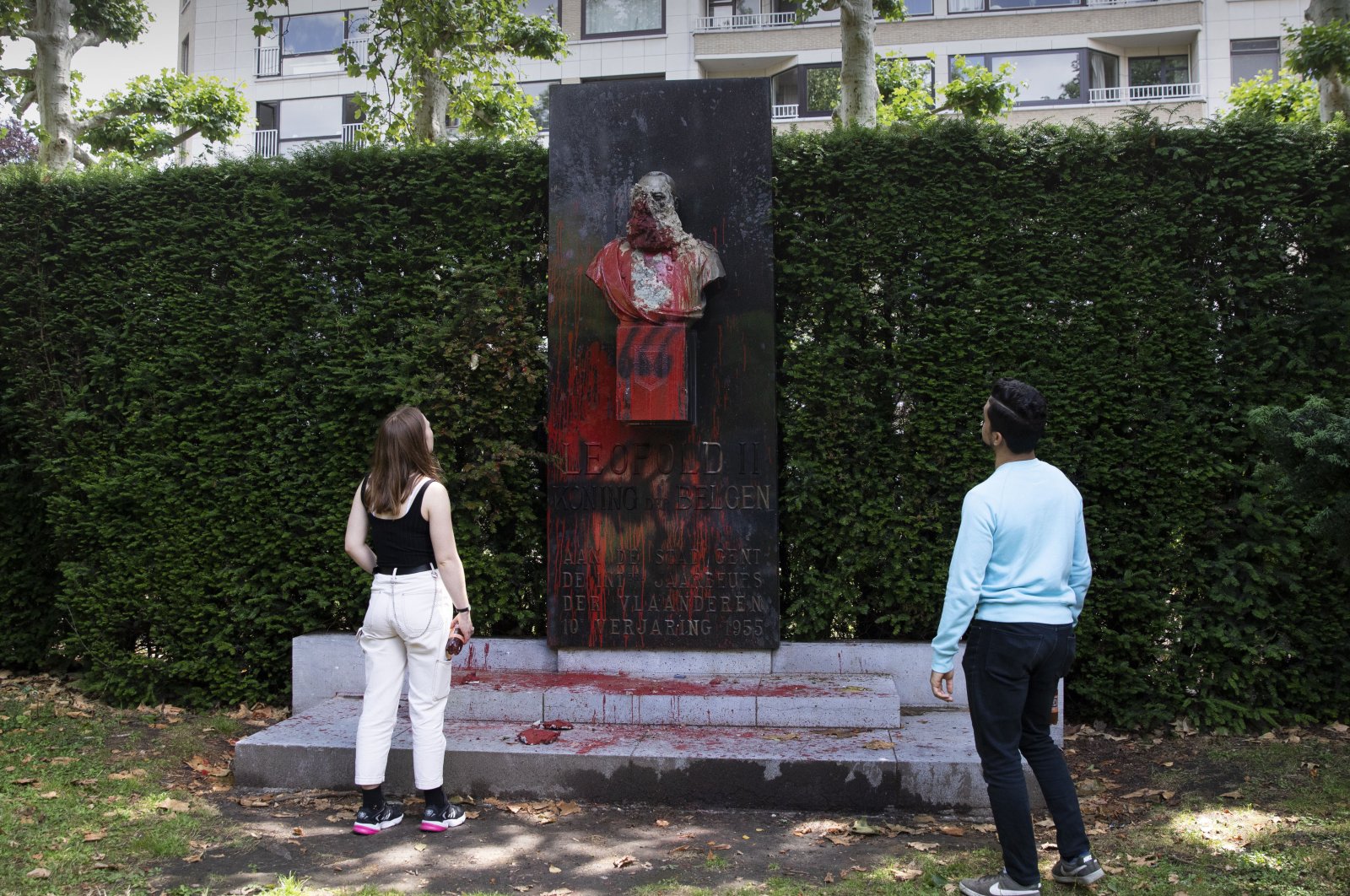 A couple stop to look at a bust of Belgium's King Leopold II, which has been damaged by red paint, graffiti and cement, at a park in Ghent, Belgium on Friday, June 19, 2020. Protests sweeping the world after George Floyd's death in the U.S. have added fuel to a movement to confront Europe's role in the slave trade and its colonial past.(AP Photo)
by French Press Agency - AFP Jun 20, 2020 11:43 am
RECOMMENDED

Belgium is due a reckoning with its colonial past and things left unsaid must now be discussed, argues the Congolese-born 72-year-old who became the country's first black mayor.

Pierre Kompany's family has made a name for itself in Belgium. He is a former refugee turned pioneering politician, and his son Vincent Kompany is a star footballer in the national squad, the world's top-ranked team.

But, in an interview with AFP before the June 30 anniversary of the then Belgian Congo's independence, and against a backdrop of anti-racism protests, Kompany senior said it was time for some home truths.

While in the United States activists declaring "Black Lives Matter" have targeted the symbols of the slave-holding Confederacy, in Belgium, the protests have focused around statues of Leopold II, "King Builder" of the Belgian nation.

Reigning between 1865 and 1909, Leopold held Belgium's central African territory -- now the Democratic Republic of Congo -- as a personal fiefdom, profiting directly from rubber plantations run with sadistic and murderous brutality.

Historians and writers have documented the crimes of the era, in which up to 10 million Congolese were killed or fell victim to disease and torture, but Leopold's statues still look down on parks and squares across modern Belgium.

For Kompany, the monuments should have been taken down and placed in museums years before they became the target of protests and night-raids by activists, as part of a broader reckoning with the past that could heal some modern wounds.

"No one would go into a museum to smash them," smiles Kompany, who was elected bourgmestre – or mayor – of the Brussels suburb of Ganshoren in 2018 and represents the centrist CDH party in the capital's regional parliament.

"There is a flagrant reality, it's not in doubt," he says of the crimes carried out in Leopold II's name.

For Kompany, Belgium missed an important opportunity to face up to its past in 2009, the centenary of the former king's death, which the Belgium state allowed to pass without fanfare, embarrassed to revive debate over his legacy.

The facts should now be taught in Belgian schools, and the state and the crown – today represented by Philippe, king of the Belgians – should apologise, he argues.

"If the state makes an apology, that would already be a lot, but if the royal family were to do so as well, it would emerge all the greater for it," Kompany says.

Born in Bukavu in eastern Congo in 1947, Kompany fled his country in 1975 after taking part in a student uprising. With the help of a doctor, he feigned a rare disease and set off to Belgium supposedly to seek treatment.

There he worked as a taxi driver to finance his civil engineering degree. He became a Belgian citizen in 1982 and married Jocelyne, with who he had three children and, now, seven grandchildren.

His family has always gravitated to the struggle for civil rights and social justice and he recalls them sharing the works of Aime Cesaire and Nelson Mandela as gifts.

Kompany did not return to Congo until 2010 when he accompanied his famous son Vincent and an NGO to open an orphanage.

"When I left Kinshasa there were fewer than a million inhabitants. When I came back it was more than 10 million. I was overwhelmed. It was a powerful moment," he recalls.

He has these people, so far away, in mind now as he presses the campaign for an official apology. "It would do them good. They would realize those unacceptable things happened," he says.