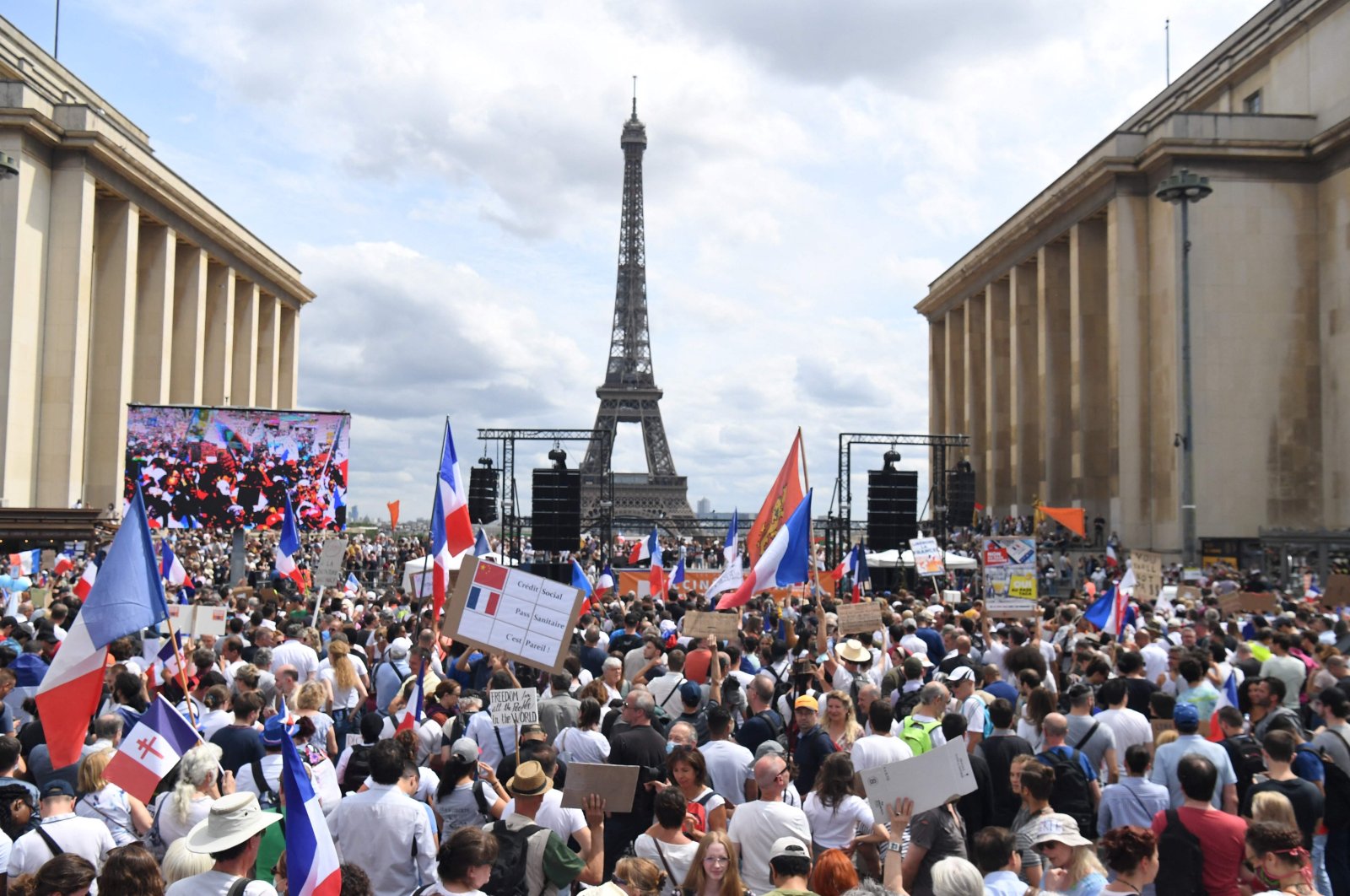 People take part in a protest against the compulsory vaccination for certain workers and the mandatory use of the health pass called by the French government, on the "Droits de l'homme" (human rights) esplanade at the Trocadero Square, in front of the Eiffel Tower in Paris, France, July 24, 2021. (AFP Photo)
by Agencies Jul 26, 2021 9:42 am
RECOMMENDED

While most French health care workers are vaccinated against the virus, a small but vocal minority is holding out. With infections exploding, a new law requiring them to get the shots is exposing the divide.

The French government, which has declared that the nation has officially entered its "fourth wave” of the pandemic, pushed through the law mandating COVID-19 vaccines for health care workers, to protect hospitals and avoid a new lockdown.

Government spokesperson Gabriel Attal said the move is not meant to stigmatize reluctant health care workers but to limit risks to the vulnerable people they care for.

The law, adopted by parliament early Monday, also sets up a "health pass” for everyone in order to access restaurants and other public venues. Both measures have prompted intense debate and two straight weekends of protests around France. Health care workers in white coats have been among the demonstrators.

Many cite incorrect information about the vaccines circulating on the internet, worry about their long-term effects or want more time to decide. Several health workers said they took issue with the mandate, not the vaccines themselves.

At one Paris protest, some carried signs reading "My body, my choice,” and a health worker dressed as the Statue of Liberty called it an "act of violence” to force people to get vaccinated.

Celine Augen, a secretary at a doctor’s office, knows she may lose her job if she refuses to get a shot but protested Saturday anyway. "I’m here today in favor of the freedom to choose to get vaccinated or not,” she said.

Solene Manable, a recent nursing school graduate who is working in a Lille hospital, said, "There are many health workers who don’t want to get vaccinated because we don’t know much about the vaccines.”

According to the interior ministry, nearly 168 rallies took place across the country with 160,000 protesters taking to the streets. Multiple rallies were organized in Paris at the Trocadero across from the Eiffel Tower, Place de la Bastille and the Palais Royal. In the heart of the city in Champs-Elysees, demonstrators attempted to block the road and attack police vehicles, jeering and chanting "Liberte" (freedom), to which police responded with tear gas and water cannon to disperse the mob, arresting nine people. Interior Minister Gerald Darmanin on Twitter condemned the alleged violence against police and journalists by the protesters.

Similar tensions were recorded in Lyon as demonstrators threw bottles, stones and other items at security forces and attempted to block the expressway. Four were arrested for misconduct and carrying out protests despite prohibition by authorities due to the violence during last weekend's rally, authorities said.

Thousands of others also joined demonstrations called by the Yellow Vest movement in Strasbourg, Lille, Marseilles, Aix-en-Provence, Dunkirk, Nice, Bordeaux, Grenoble, Nantes, Montpellier and other cities to oppose the government of President Emmanuel Macron, who announced last week that health passes – giving details of negative PCR/antigen tests and vaccination for anyone 12 and older – will be mandatory for all events and public places of leisure and culture with occupancy of 50 or more people.

Protesters have dubbed the move "totalitarian," "dictatorial" and "anti-freedom."

Vaccine hesitancy among some health workers has been an issue in the U.S. and elsewhere, too. But the French mandate is stirring up anger on the political fringes in a country long considered more vaccine-skeptic than its European neighbors.

France has faced medical scandals in recent decades involving vaccines, diet pills and breast implants that have seeded doubts about the medical establishment. Suspicion of big pharmaceutical companies is relatively common, and politicians on both the extreme right and the left are now fueling that skepticism for their own ends.

The country is now seeing about 20,000 new infections a day, up from just a few thousand in early July, and has counted over 111,000 virus-related deaths in the pandemic.

In June, France's public health agency estimated that 72.2% of doctors had received the first dose of a COVID-19 vaccine, against only 58.7% of nurses and 50% of assistant nurses. The discrepancy predates the pandemic: according to health authorities, 72.2% of doctors received a vaccine against the flu in the winter of 2018, while only 20.9% of assistant nurses did. Some health workers feel they are being talked down to and are underappreciated in general.