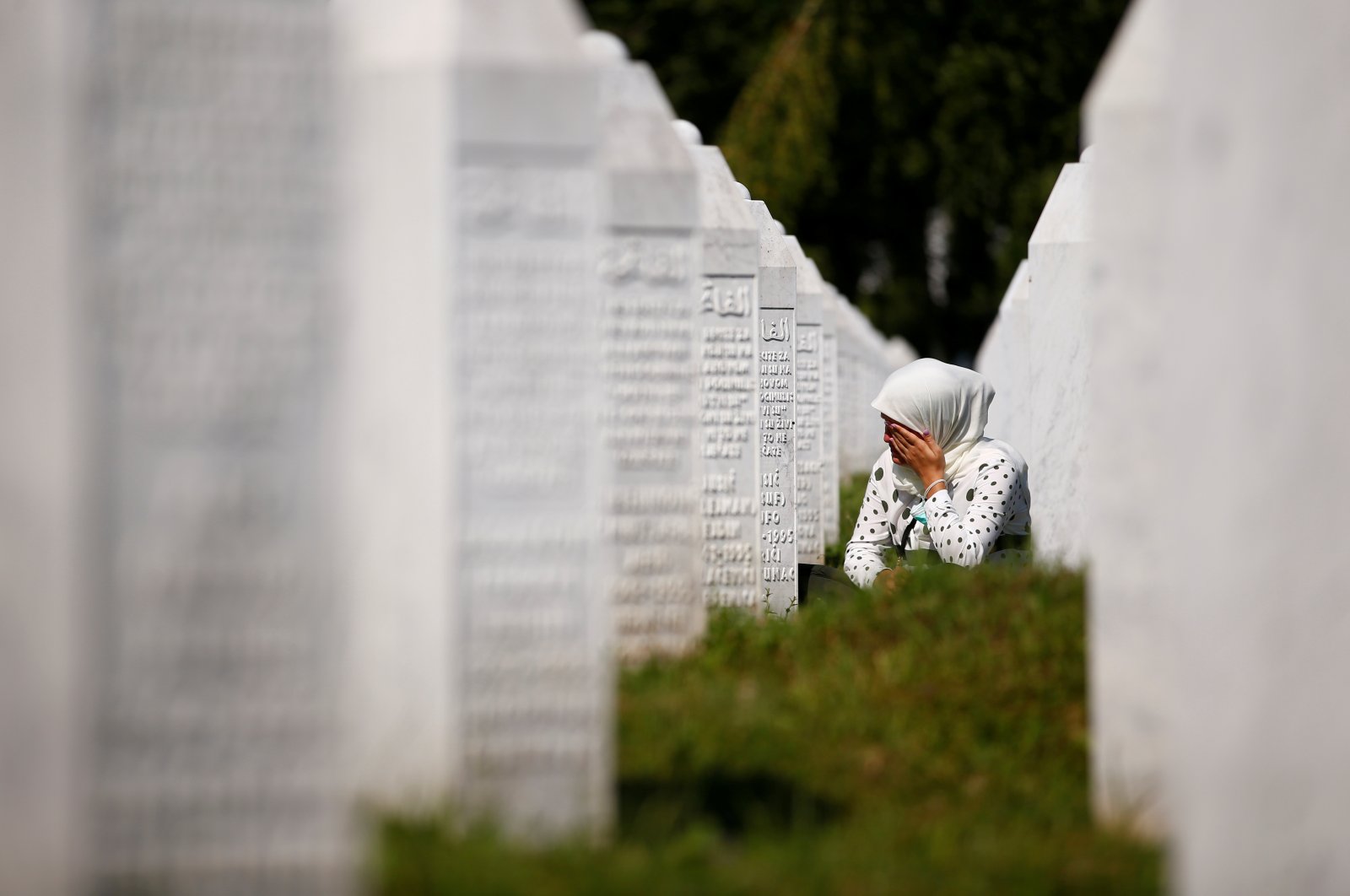 A woman cries at a graveyard ahead of a mass funeral in Potocari near Srebrenica, Bosnia and Herzegovina, July 11, 2020. (Reuters Photo)
by French Press Agency - AFP Jul 12, 2020 12:23 pm
RECOMMENDED

Bosnian Muslims marked the 25th anniversary of the Srebrenica massacre on Saturday, the worst atrocity on European soil since World War II, with the memorial ceremony sharply reduced as a result of the coronavirus pandemic.

Many mourners braved the tighter restrictions put in place to stem the spread of COVID-19 to attend the commemorations which culminated in a ceremony laying to rest the remains of nine victims identified over the past year.

Sehad Hasanovic, 27, was one of around 3,000 relatives of the victims who attended the commemorations in spite of the virus.

He has a 2-year-old daughter – the same age he was when he lost his father.

"It's difficult when you see someone calling their father, and you don't have one," Hasanovic said in tears.

His father, Semso, "left to go into the forest and never returned. Only a few bones have been found," said Hasanovic.

Like his brother Sefik and father Sevko, Semso was killed when Bosnian Serb troops led by Ratko Mladic entered the Srebrenica enclave before systematically massacring Bosnian men and adolescents.

"The husbands of my four sisters were killed," said Ifeta Hasanovic, 48, whose husband Hasib was one of the nine victims whose remains have been identified since July 2019.

"My brother was killed, so was his son. My mother-in-law lost another son as well as her husband."

The nine victims were buried in the cemetery of the Genocide Memorial in Potocari, a village near Srebrenica where the base of the U.N. protection force was located.

The episode – labeled as genocide by two international courts – came at the end of a 1992-1995 war between Bosnia's Croats, Muslims and Serbs that claimed some 100,000 lives.

So far, the remains of nearly 6,900 victims have been found and identified from more than 80 mass graves.

Bosnian Serb wartime military chief general Ratko Mladic, still revered as a hero by many Serbs, was sentenced to life in prison by a U.N. court in 2017 over war crimes including the Srebrenica genocide. He is awaiting the decision on his appeal.

Radovan Karadzic, a Bosnian Serb wartime political leader, was also sentenced to life in prison in The Hague.

The Srebrenica massacre is the only episode of the Bosnian conflict to be described as genocide by the international community.

In the run-up to the anniversary, Serbian President Aleksandar Vucic described Srebrenica as "something that we should not and cannot be proud of," but he has never publicly uttered the word "genocide."

Several thousand Serbs and Muslims live side by side in impoverished Srebrenica, a town in eastern Bosnia with just a few shops in its cente'.

On Friday, the town's Serbian mayor Mladen Grujicic – who was elected in 2016 after a campaign based on genocide denial – said that "there is new evidence every day that denies the current presentation of everything that has happened."

But on Friday, the Muslim member of Bosnia's joint presidency, Sefik Dzaferovic, said: "We will fight against those who deny the genocide and glorify its perpetrators."

He was backed on Saturday by Bosnia's grand mufti Husein Kavazovic.

"Despite all that has happened, life is reborn in Srebrenica," Kavazovic said.

"The past which has been difficult can be an opportunity to get to know each other better and to build a better future if we accept the truth as the guideline."

Bakir Izetbegovic, leader of the main Bosnian Muslim political party, the SDA, and son of Alija Izetbegovic, the Bosnian president at the time of the conflict, called on the world to push back against the deniers.

"The international community did not defend Srebrenica 25 years ago, but it has the opportunity to defend the truth that is being challenged," Izetbegovic said.

French President Emmanuel Macron on Saturday described the events 25 years ago as "the painful symbol of the international community's failure to protect civilian populations who had been most in need of its help."

While calling for reconciliation, he said there was "no place for negationism, historical revisionism or the glorification of war criminals," in a country which has expressed a wish to join the European Union.

In order to avoid large crowds on Saturday, organizers invited people to visit the memorial center over the whole month of July.