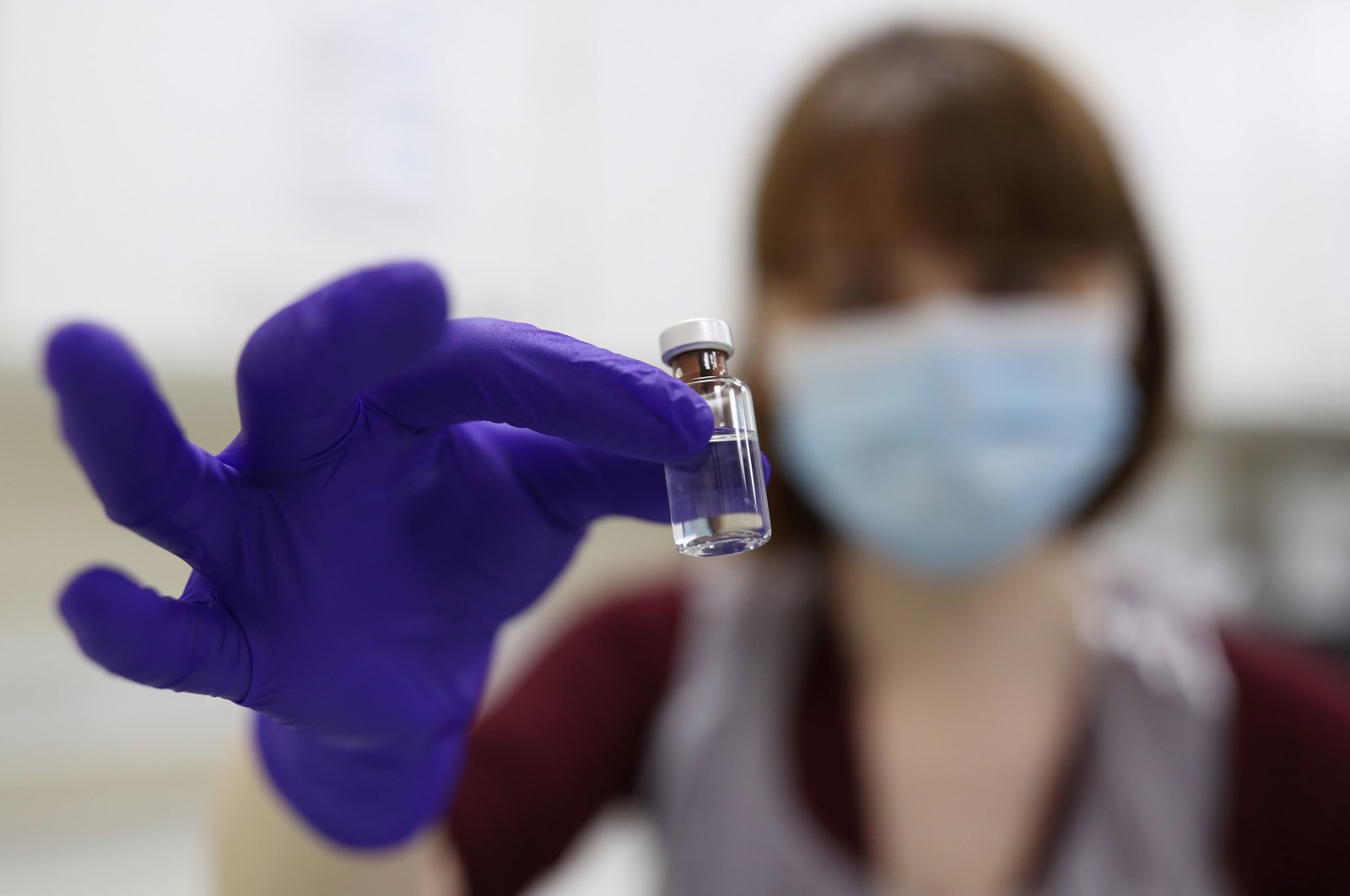 An NHS pharmacy technician holds a vial as she simulates the preparation of the Pfizer-BioNTech coronavirus vaccine at the Royal Free Hospital, London, Dec. 4, 2020. (AFP Photo)
by Agencies Dec 07, 2020 10:50 am
RECOMMENDED

As countries prepare to launch mass inoculations to get the coronavirus pandemic under control, Britain is launching its vaccine program, after becoming the first country to authorize American drugmaker Pfizer and Germany’s BioNTech vaccine for emergency purposes. The vaccine was shown to have around 95% efficacy.

Shipments of the coronavirus vaccine were delivered to the U.K. in super-cold containers on Sunday, two days before the immunization program goes public – one that is being closely watched around the world. Around 800,000 doses of the vaccine are now in place for the start of the immunization program, a day that Health Secretary Matt Hancock has reportedly dubbed as "V-Day,” a nod to triumphs in World War II, as reported by The Associated Press (AP).

Vaccinations will be administered starting Tuesday at around 50 hospital hubs in England. Scotland, Wales and Northern Ireland will also begin their vaccination rollouts the same day. Governments and health agencies around the world will be monitoring the British vaccination program, which will take months, to note its successes and failures and adjust their plans accordingly.

The excitement in Britain, which has Europe's highest virus-related death toll at more than 61,000, was palpable. Patients aged 80 and older who are already attending hospitals as outpatients, and those being discharged after a stay in the hospital will be among the first to receive the jab.

Hospitals will also start inviting those over 80 in for a vaccine shot and will work with nursing homes to book staff into vaccination clinics. Any appointments not taken up will be offered to those health workers deemed to be at the highest risk of COVID-19. Everyone who is vaccinated will need a booster jab 21 days later.

The U.K. has secured 40 million doses of the Pfizer vaccine, which can cover 20 million people. Since the British government will only immunize people over 16, around 55 million people in the U.K. will be eligible. In total, Britain has procured 357 million doses of seven vaccine candidates, including 100 million of the much cheaper Oxford vaccine, which has a lower efficacy rate than the Pfizer or Moderna vaccines.

The virus has killed more than 1.5 million people and infected over 65 million since it emerged in China in December of last year. The number of coronavirus infections remains at a high level in Europe, prompting countries to roll out further restrictions as the holidays approach. Europe accounts for 40% of new global coronavirus cases and half of the new global deaths due to the virus, according to the World Health Organization's (WHO) European office. European Union authorities are expected to make a decision by Dec. 29 on approving the first vaccine for use.

Every country has different rules for determining when an experimental vaccine is safe and effective enough to use.

Chancellor Angela Merkel’s chief of staff said on Monday he expects coronavirus vaccinations to start in Germany “in the very first days” of the new year. The trained doctor said he’s prepared to help vaccinate people himself. The United States hopes to begin a sweeping program of COVID-19 vaccinations this month and plans to have immunized 100 million people against COVID-19 by the end of February.

Elsewhere in the world, provincial governments across China are placing orders for experimental, domestically made coronavirus vaccines, though health officials have yet to say how well they work or how they may reach the country's 1.4 billion people. Developers are speeding up final testing, the Chinese foreign minister said during a U.N. meeting last week.

Even without final approval, more than 1 million health care workers and others in China who are deemed at high risk of infection have received experimental vaccines under emergency use permission. Developers have yet to disclose how effective their vaccines are and possible side effects.

China's fledgling pharmaceutical industry has at least five vaccines from four producers being tested in more than a dozen countries including Russia, Egypt and Mexico. Health experts say even if they are successful, the certification process for the United States, Europe, Japan and other developed countries might be too complex for them to be used there. However, China said it will ensure the products are affordable for developing countries and has been actively pursuing deals across the world.