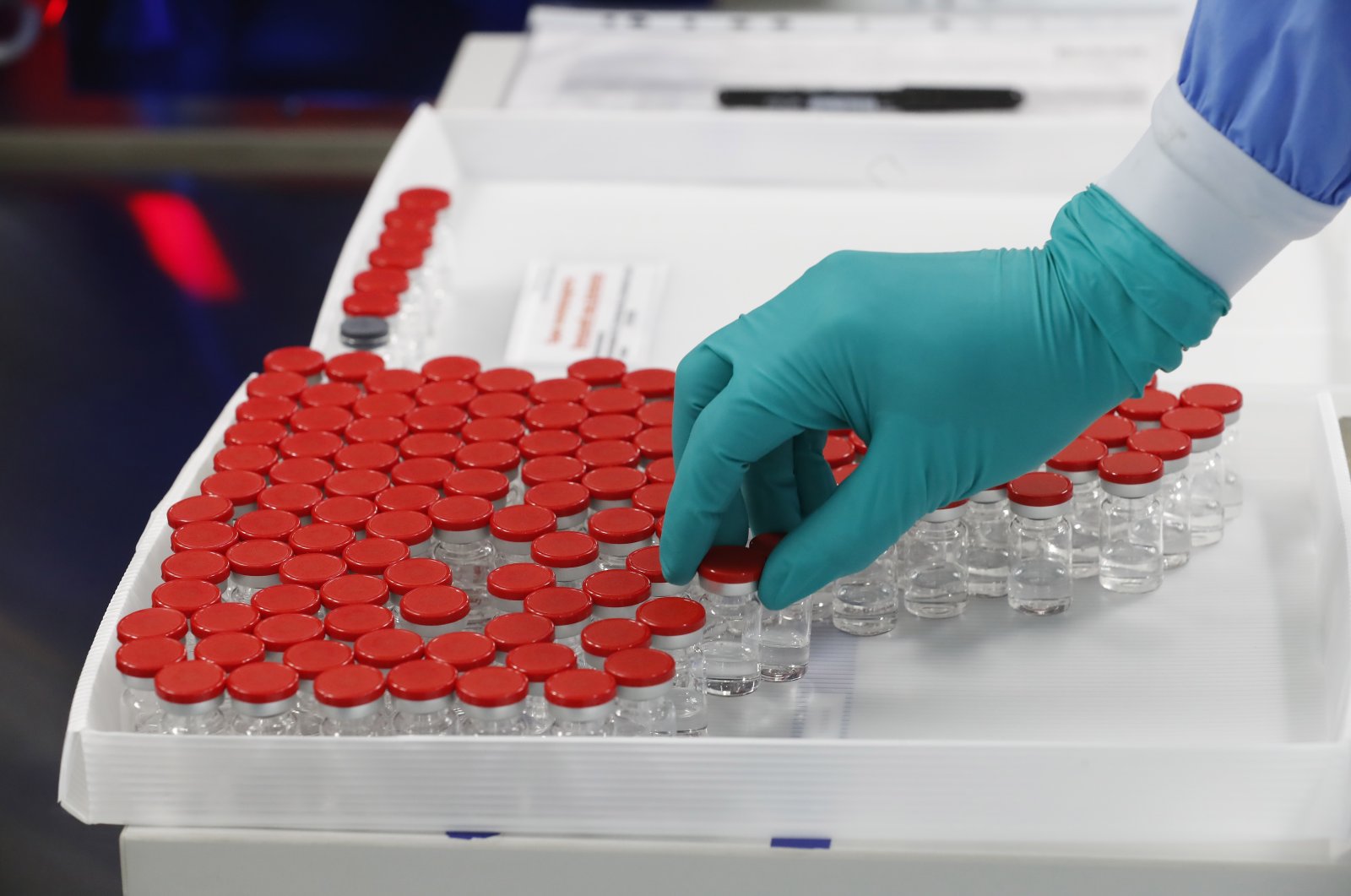 The process of pre-production of Russia's Gam-COVID-Vac vaccine against COVID-19, registered under the trade name Sputnik V, developed by the Gamaleya Center of Epidemiology and Microbiology in coordination with the Russian Defence Ministry, at the facility of Russia's biotechnology company BIOCAD in Strelna, outside Saint Petersburg, Russia, Dec. 4, 2020. (EPA Photo)
by Agencies Dec 11, 2020 5:34 pm
RECOMMENDED

British pharmaceutical company AstraZeneca announced Friday that it would collaborate with a Russian state producer to potentially combine their coronavirus vaccines.

"Combinations of different COVID-19 vaccines may be an important step in generating wider protection through a stronger immune response and better accessibility," AstraZeneca said in a statement.

The collaboration would test a combination of the AZD1222 vaccine, developed by AstraZeneca and Oxford University, and the Sputnik V vaccine, by Russia's Gamaleya Research Institute, it said.

Both of those are adenoviral vector vaccines, which contain genetic material of the SARS-CoV-2 virus spike protein but cannot replicate. While the Sputnik V jab uses human adenovirus vectors, AZD1222 relies on adenovirus from chimpanzees. Both are administered in two doses.

Russia was one of the first countries to announce the development of a coronavirus vaccine, which it named Sputnik V after the Soviet-era satellite.

While the jab is yet to complete its third and final phase of testing involving some 40,000 volunteers, its developers have said interim trial results showed 95% efficacy.

AstraZeneca said adults aged 18 and over will be enrolled in the trials, expected to start before the end of the year.

Russia's Direct Investment Fund (RDIF), which was involved in the development of Sputnik V, said in its own statement Friday that on Nov. 23, it offered AstraZeneca "to use one of the two vectors of the Sputnik V vaccine in additional clinical trials of its own vaccine."

Moscow announced the registration of Sputnik V in August after it had completed the second phase of trials on under 100 volunteers, raising concerns from scientists at home and abroad.

Analysts viewed the fast-track registration and the early launch of mass vaccination as an effort for Russia to bolster its geopolitical influence.

Several Russian allies – including India, Venezuela and Belarus – have said they would take part in clinical trials for the jab, while Kremlin-friendly governments have preordered more than a billion doses of Sputnik V.

Ignoring accusations by Britain of Russian-linked hackers targeting vaccine research, Moscow has said it is open to cooperation with Western countries.

The vaccine's developers said it will be available on international markets for less than $10 per dose – and that it can be stored at between 2 and 8 degrees Celsius (between 35.6 and 46.4 degrees Fahrenheit) instead of the temperatures far below freezing required for some other vaccines.

In its statement Friday, AstraZeneca said cooperation with the Gamaleya Research Institute is "important to explore the potential of vaccine combinations unlocking synergies in protection and accessibility through a portfolio approach."

The pharmaceutical giant had earlier said that its vaccine was on average 70% effective.

Head of RDIF Kirill Dmitriyev said Friday the collaboration will be a "unique example of cooperation between scientists from different countries in jointly fighting coronavirus."

While Russia's second wave has continued to surge in recent weeks, the country has refrained from reimposing a strict nationwide lockdown as it did in the spring and pinned its hopes on mass vaccination.

On Friday it reported 613 virus deaths over the past 24 hours, surpassing the 600 mark for the first time since the beginning of the pandemic.

Total fatalities stood at 45,893, while infections jumped to 2,597,711, placing Russia's caseload fourth-highest in the world.

Russia has reported a much lower death rate than other badly hit countries, raising concerns that authorities have downplayed the outbreak.

Data published by the country's federal statistics service on Thursday indicated excess deaths of nearly 165,000 year-on-year between March and October, suggesting virus deaths could be much higher.