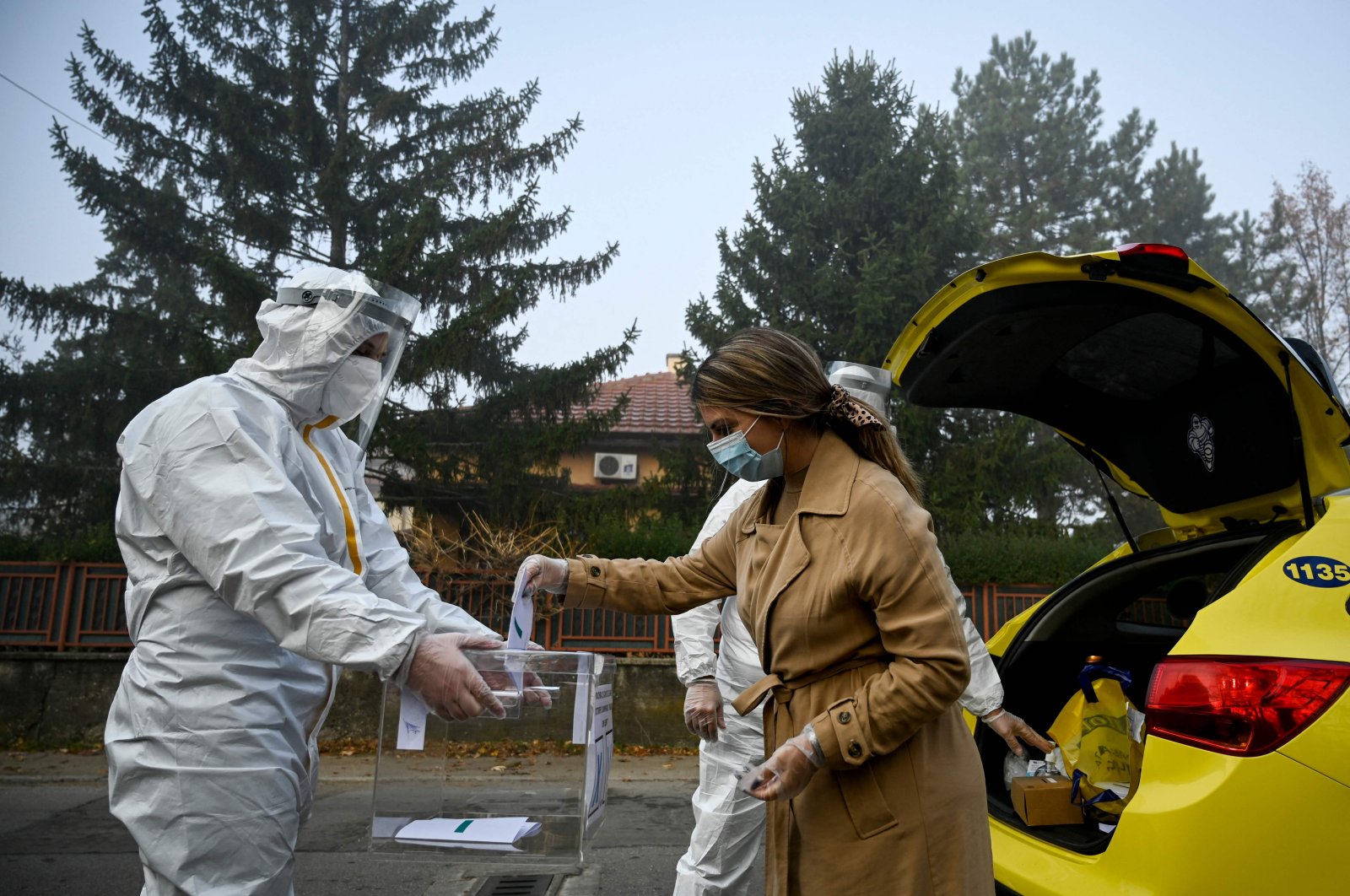 An electoral staff member of a mobile polling center, wearing Personal Protective Equipment (PPE), presents a ballot box to a woman in self-quarantine to collect her vote for the second-round of the presidential election and the parliamentary elections in the village of Voluek, Bulgaria, Nov. 21, 2021. (AFP Photo)
by Agencies Nov 21, 2021 5:51 pm
RECOMMENDED

Citizens in Bulgaria headed to the ballot box for the second time this month to vote for a president as the voter turnout was only 40.2% and no candidate collected more than half the votes in the first round.

Incumbent President Rumen Radev, who won 49.4% of the vote in the first round, is facing the Sofia University rector, in the second round.

Gerdzhikov, who was nominated by former Prime Minister Boyko Borissov's Citizens for European Development of Bulgaria (GERB) party, received 22.8% of the votes in the first round.

Mustafa Karadayı, head of the Movement for Rights and Freedoms (MRF) party, the only candidate representing ethnic Turks and other Muslims, came third in the first round with 11.5% of the votes.

Founded only few weeks ago by two Harvard graduates, the We Continue the Change party, surprisingly won the parliamentary election last week because of their resolute anti-graft actions as Finance and Economy caretaker ministers.

The new party has declared its support for Radev, along with several other opponents of Boyko Borissov, including the Socialist Party and the anti-elite There is Such a People party.

Gerdzhikov, a professor in ancient and mediaeval literature, is supported by Borissov’s GERB party and the mainly Turkish Movement for Rights and Freedoms.

A strong supporter of Bulgaria’s pro-Western orientation, Gerdzhikov has pledged to unite the nation, to improve the rule of law and work for better business opportunities.

Radev, a former NATO fighter pilot who studied for a time at the United States Air War College in Alabama, has pledged to maintain Bulgaria’s place in the Western alliance, if he is reelected. But he also has insisted for pragmatic ties with Russia and that sanctions on Moscow need to be lifted.

During a presidential debate last week, Radev said that the Crimean Peninsula, annexed by Russia from Ukraine in 2014, was “currently Russian." His remarks prompted protests from the Ukrainian government.

About 6.7 million Bulgarians are eligible to vote, but pollsters expect many of them to stay home because of growing concern over a new deadly COVID-19 wave.

Preliminary results will be announced Sunday night, with the final outcome due Monday.

Over 6.6 million citizens are registered to vote at 13,200 polling stations in Bulgaria and 750 centers in 67 other countries.

Turkey, home to many dual Bulgarian nationals, has 58 polling stations for Sunday's vote.

Bulgaria's Interior Ministry assigned more than 16,000 personnel to ensure the security of the election process.