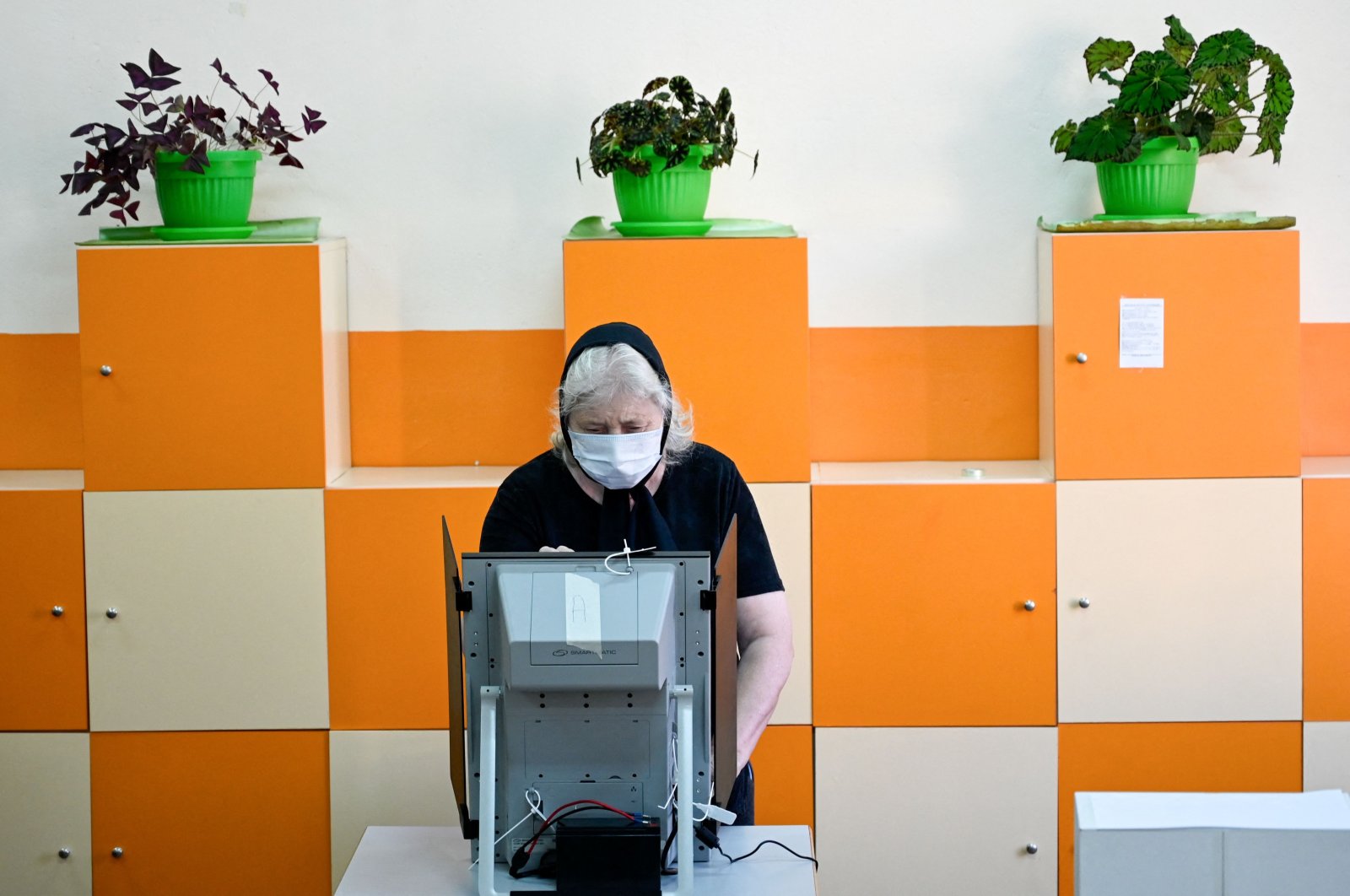 A woman casts her vote at a polling station during the country's parliamentary election in Sofia, Bulgaria, July 11, 2021. (AFP Photo)
by Agencies Jul 11, 2021 8:49 pm
RECOMMENDED

Bulgaria's center-right GERB party and an anti-establishment rival led by singer-turned-politician Slavi Trifonov are neck-and-neck in exit polls published on Sunday after voting closed in a general election.

Several exit polls projected that Trifonov's There is Such a People (ITN) party would finish within 1% of GERB, led by former Prime Minister Boyko Borisov.

The latest opinion polls suggest that the rerun could produce similar results but also a further drop in support for former Prime Minister Boyko Borissov’s GERB party, after the current caretaker government made public allegations of widespread corruption during his rule.

NATO and EU member Bulgaria has been repeatedly criticized for not tackling corruption and for deficiencies in the rule of law and media freedom.

The anti-corruption campaign of Borissov’s opponents was additionally boosted by the sanctions the U.S. Treasury imposed last month against several Bulgarian public officials and business leaders for corruption.

President Rumen Radev, a vocal critic of Borissov, urged Bulgarians to vote massively in the election to bring “irreversible changes for the better.”

“I voted for a Bulgaria where its citizens live with dignity and the young people have a future,” he said after voting.

Hristo Ivanov of the Democratic Bulgaria party said the country must move on from the current situation of corruption and lack of perspective.

“Our goal is to see a government that is ambitious, that really has the guts, frankly speaking, to do the necessary reforms, because removing Boyko Borissov from power is just the beginning, not the end, of dismantling the corruption system,” Ivanov said after casting his ballot.

Despite the serious setbacks that Borissov's GERB party suffered, the reputation of the 62-year-old political maverick remains high among his loyal supporters who are relying on their government-sponsored jobs to deal with economic hardships.

Speaking to reporters after voting, Borissov criticized his opponents for allegedly trying to falsify election results as well as allegedly using “terror and repression” against him. But he said that wouldn't contest the results of the vote.

Polls suggest a tight race between Borissov’s party, which came first in April with over 26% of the vote, and its main rival, the anti-elite ITN.

The opposition Socialist Party is tipped to rank third, followed by the liberal anti-corruption group Democratic Bulgaria and the ethnic Turkish MRF party.

The new center-left alliance Stand Up! Mafia Out!, which emerged after last year’s anti-government protests, is projected to pass the 4% hurdle to enter parliament.

According to political analyst Dimitar Ganev, there are few chances for Borissov to return to the office for a fourth term regardless of whether the GERB finishes first in the election because most political groups have rejected the idea of cooperating with the ex-ruling party.

The 12,000 polling stations close at 8 p.m. There are 6.7 million eligible voters who are electing 240 lawmakers. Preliminary results are expected around midnight Sunday.