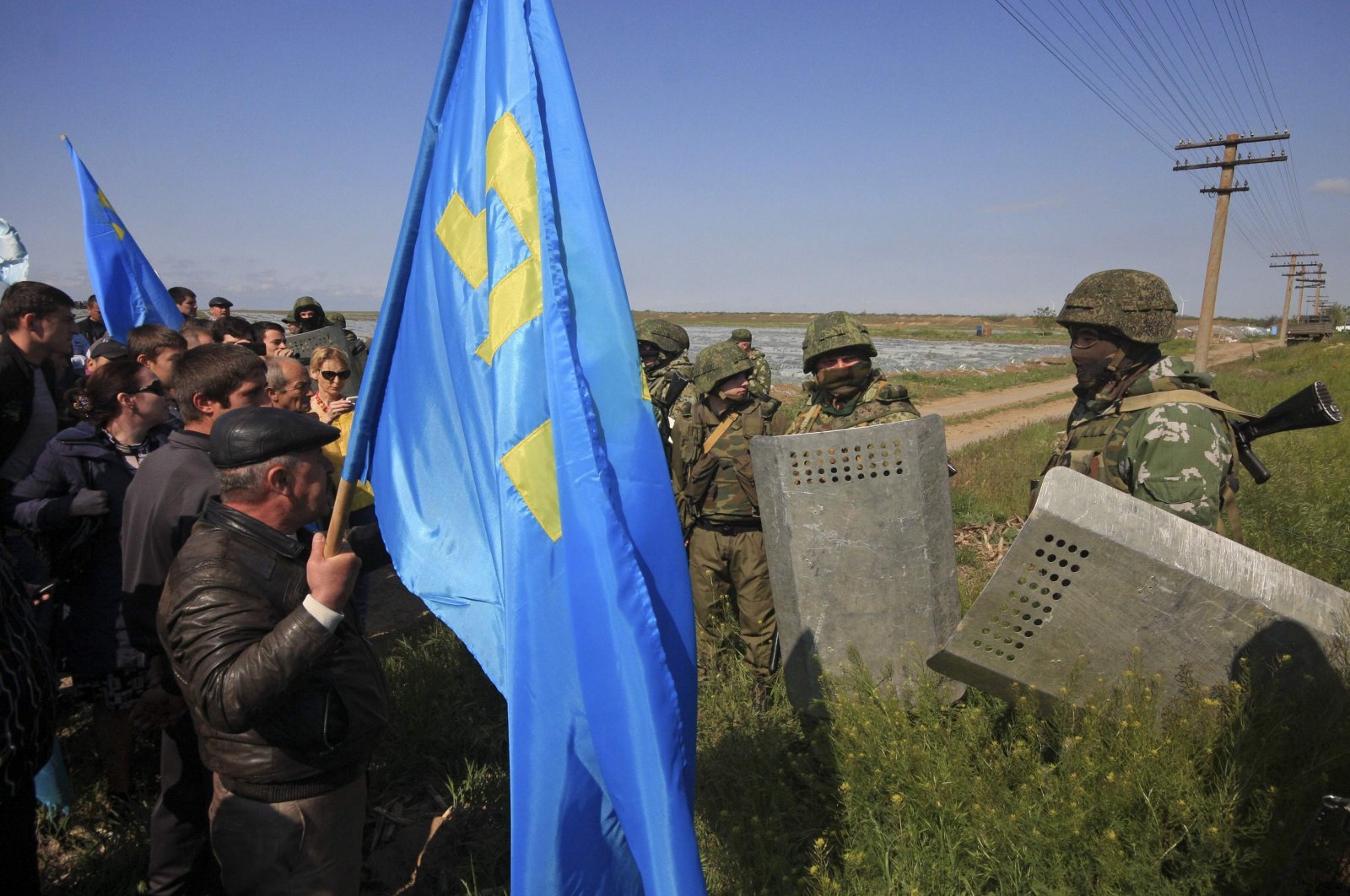 Russian servicepeople attempt to block the way for Crimean Tatars crossing a checkpoint connecting Crimea and the Kherson region near Armyansk, Crimea, May 3, 2014. (Reuters Photo)
by Daily Sabah with AFP Jan 14, 2021 2:44 pm
RECOMMENDED

A complaint brought by Ukraine against Russia alleging human rights violations in the Crimean peninsula in 2014 is "partly admissible," the European Court of Human Rights (ECtHR) said Thursday.

Ukraine alleges a pattern of violations of the European Convention on Human Rights by Russia in Crimea, which Moscow seized from Ukraine in a move never recognized by the international community.

"The Court identified the scope of the issue before it and held that what was to be decided was whether the alleged pattern of human rights violations by Russia in Crimea during the relevant period, namely between 27 February 2014 and 26 August 2015, was admissible," it said in the ruling.

The ECHR "has, by a majority, declared the application partly admissible. The decision will be followed by a judgement at a later date," it said.

But it also said it was not ruling on whether the annexation of Crimea itself was illegal. Both Ukraine and Russia are members of the Council of Europe, of which the court is a part.

"The Court held that it was not called upon in the case to decide whether Crimea's admission, under Russian law, into Russia had been lawful from the standpoint of international law," it said.

Ukraine points to the storming of government offices in Crimea by Russian forces in February 2014 among several incidents that it says constitute a pattern of rights abuses.

The court found that Ukraine's account was "coherent and consistent" with evidence to prove that Russian troops had not been "passive bystanders" but had been actively involved in violations.

It said that "all but a few" of Ukraine's complaints were admissible, without elaborating.

Russia's justice ministry Thursday reacted to the ECHR statement by declaring that it showed the charges "were not proven," calling Ukraine's claims "groundless." For his part, Ukraine's Justice Minister Denys Malyuska described the ruling as a "victory."

"We and the Council of Europe are sending a powerful message: Crimea remains one of our priorities. We remember everything and will chase down all those involved," Malyuska wrote on his Facebook page.

On Tuesday, Russia sentenced three Crimean Tatars to lengthy jail terms for "plotting to seize power." A military court in southern Russia sentenced Enver Omerov to 18 years in jail, Ayder Dzhapparov to 17 years and Riza Omerov to 13 years after finding them guilty of extremism and plotting to violently seize power, a statement from the court said.

All three were active in the Hizb ut-Tahrir group, a group branded as a terrorist organization by Russia, but legal in Ukraine, the court ruled.

They had worked to "created favorable conditions for the violent seizure of power and violent change of the constitutional order of the Russian Federation," said the court.

Rights group Memorial described the defendants as "political prisoners" in a statement.

"The convenient and familiar accusation of involvement with Hizb ut-Tahrir has become a tool for suppressing public solidarity among citizens of Crimea," it added.

On Monday, more than 100 Crimean Tatars were detained on the Crimean Bridge, as they traveled to mainland Russia to support the defendants on the day of the verdict, the Crimean Solidarity movement said on Facebook.

Crimean Solidarity said that according to the case materials, the defendants did not have weapons, explosives or ammunition, did not plan to commit a terrorist act, and did not call on others to carry out terrorist actions. There is no evidence of an attempt to overthrow the constitutional order of the Russian Federation and seize power, the group said.

The case materials contain audio recordings of the convicts having discussions regarding religious and political topics. The recordings, in fact, were the only evidence that they committed a terrorist crime.

Crimean Tatars are a Muslim ethnic minority, most of whom opposed the Russian annexation of Crimea.

Militia forces, who later turned out to be Russian troops, took control of Crimea in a lightning operation in February 2014 with Russia annexing the peninsula the following month. The move followed the ousting of the pro-Russian president in Kyiv by a popular uprising. While the annexation of Crimea was largely bloodless, it was followed by a conflict in the east of Ukraine that has claimed some 13,000 lives.