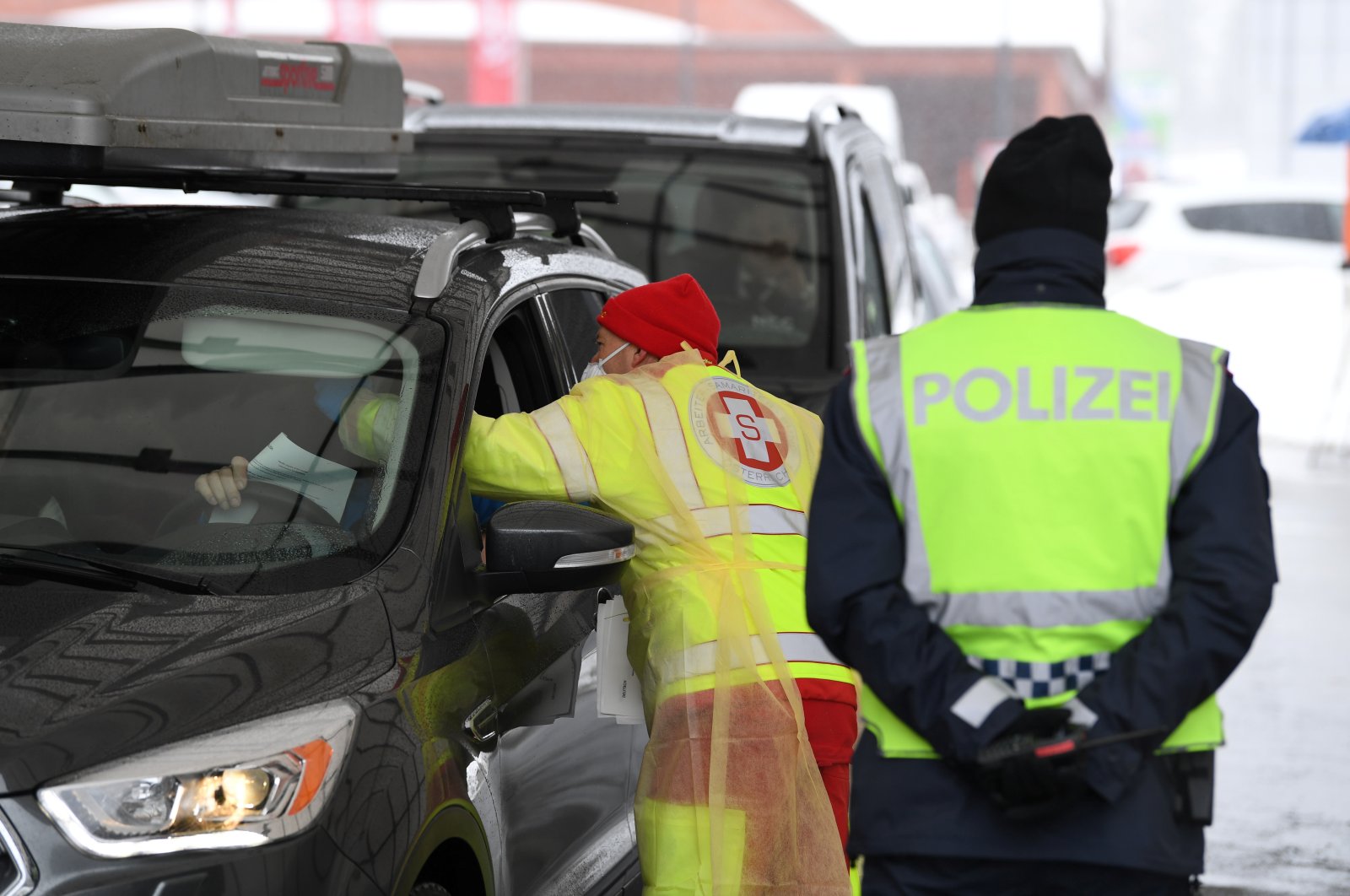 A medic checks the temperature of a driver coming from Italy due to the spread of the coronavirus disease (COVID-19) in Italy at the Brenner Pass border crossing between Italy and Austria, March 10, 2020. (Reuters Photo)
by Daily Sabah with Agencies Mar 10, 2020 3:18 pm

The coronavirus has put millions in Italy under lockdown, pushing other European countries to take severe measures, while China's Wuhan and Hubei, epicenters of the novel virus, have shown signs of the outbreak slowing down

While China, the epicenter of the global outbreak of coronavirus, is seemingly showing signs of recovery, the virus has caught Europe off guard, with nowhere hit as evidently as Italy, where some 60 million in the country were put under lockdown.

"We’re only at the beginning,” said Dr. Massimo Galli, head of infectious disease at Sacco Hospital in Milan, where people at the city’s main train station were required to sign forms certifying the necessity of their travel.

Some 9,172 people were infected in Italy and 463 have died, with a growing sense the numbers would only worsen in the country, where travel restrictions previously limited to the country’s north were extended everywhere beginning Tuesday, with soldiers and police enforcing bans.

More than 114,300 people around the globe have been infected by the coronavirus and over 4,000 have died, according to a Reuters tally of government announcements on Wednesday. Scores of countries across Europe and elsewhere around the world have restricted the arrivals of travelers from Italy and advised self-isolation.

Italy’s far-reaching restrictions were to last through April 3 and violators risked up to three months in jail or fines of 206 euros ($225). Schools and universities were remaining closed and pubs, eateries and cafes were to shut down at dusk.

Conte assured Italians that supermarkets would remain open and stocked Tuesday after some 24-hour markets experienced an increase of people overnight.

In Soave, a wine-producing town near Verona, the normally bustling streets were nearly deserted.

Cafe owner Valentino Bonturi said he was enforcing new restrictions to ensure patrons weren't bunched too closely, meaning people needed to be seated rather than stand at a counter, as is customary.

Outbreaks flared in France, Spain and Germany, and fear grew in the U.S., where more than 750 people are infected and even some senior political leaders are being quarantined.

In Spain, over 1,200 cases and 30 deaths reported, and the country decided to close schools and universities in Madrid and the Basque capital Vitoria. Spanish far-right lawmaker Javier Ortega Smith was diagnosed with coronavirus, and he and his 51 fellow lawmakers from Vox party will work from home, the party said Tuesday.

The party, the third-largest in the country's lower house, has asked for a suspension of Parliament's activity.

Ortega Smith is the first Spanish lawmaker diagnosed with the virus.

Last weekend, he attended Vox's annual rally with thousands of supporters. Footage distributed by the party showed him hugging and kissing party supporters.

The death toll in France rose to 30 from 25 a day earlier. Two passengers on a cruise ship being held outside the southern French port of Marseille are being tested for the virus.

Poland, with 17 cases so far, on Tuesday announced the cancellation of all mass events. Russia recommended Tuesday that people avoid public transportation, shopping malls and other public places at rush hour. Austria said it will deny entry to people arriving from Italy and has banned indoor events of more than 100 people. The Czech Republic, which has reported 40 cases, will suspend schools other than universities starting Wednesday and ban events hosting more than 100 people.

For most people, the new coronavirus causes only mild or moderate symptoms, such as a fever and a cough. For some, especially older adults and people with existing health problems, it can cause more severe illness, including pneumonia.

The World Health Organization (WHO) says people with mild illnesses recover in about two weeks, while severe cases may last three to six weeks.

The leader of WHO, Tedros Adhanom Ghebreyesus, said Monday, "the threat of a pandemic has become very real.”

The most recent additions are Panama, adding to a few dozen cases in Latin America and Mongolia, which borders China. Authorities there said Tuesday the country's first virus patient was a French energy worker who met with colleagues and traveled while he was infected.

Signs of recovery in China

In mainland China, where the outbreak emerged in December, almost three-fourths of its more than 80,000 patients have recovered. President Xi Jinping’s trip to the coronavirus’ epicenter of Wuhan – his first since the start of the outbreak – came as parts of his country return to normalcy, and was a sign of the diminishing threat the illness presents in China as it spreads west.

Xi’s trip to Wuhan came as the country recorded just 19 new cases of the virus Tuesday. The official Xinhua News Agency said Xi went to a hastily built hospital, visited with patients and encouraged staff to "firm up confidence in defeating the epidemic.”

"The spread of the novel coronavirus disease has been basically curbed in Hubei province and its capital city Wuhan," Xi said, according to the official Xinhua news agency.

"Initial success has been made in stabilizing the situation and turning the tide in Hubei and Wuhan," he said.

He then visited Wuhan residents under quarantine at home, Xinhua reported.

The visit also was likely to be seen as an attempt to bolster views of the ruling Communist Party’s handling of the crisis. Xi was conspicuously absent from the public eye during the early days of the outbreak and alarms were not sounded until late January.

Wuhan and nearby cities have been under lockdown since then, though, in a virus-containment measure.

Ying Yong, the party secretary of Hubei province where Wuhan is located, told local officials that preparations should be made for resuming business production and the safe and orderly movement of individuals, according to a notice published on Hubei's government website.

Already, there are signs the lockdown is loosening. Jingzhou, a city in Hubei, has ordered roads and village entrances in low-risk areas to be reopened to restore agricultural production. And Hubei's government said Tuesday it is launching an app-based system in which people who are deemed healthy and not at risk are given green codes to allow them to travel freely within the province.

The total confirmed cases in mainland China stands at 80,754.

In Iran, one of the countries hardest-hit by the virus, the death toll jumped Tuesday to 291 and the total number of infections rose to more than 8,000. Lebanon, on the other hand, reported its first death on Tuesday. Israel, with 42 cases, will require anyone arriving from overseas to self-quarantine for 14 days. Turkey, a major tourist destination in the region, has not reported any cases so far.