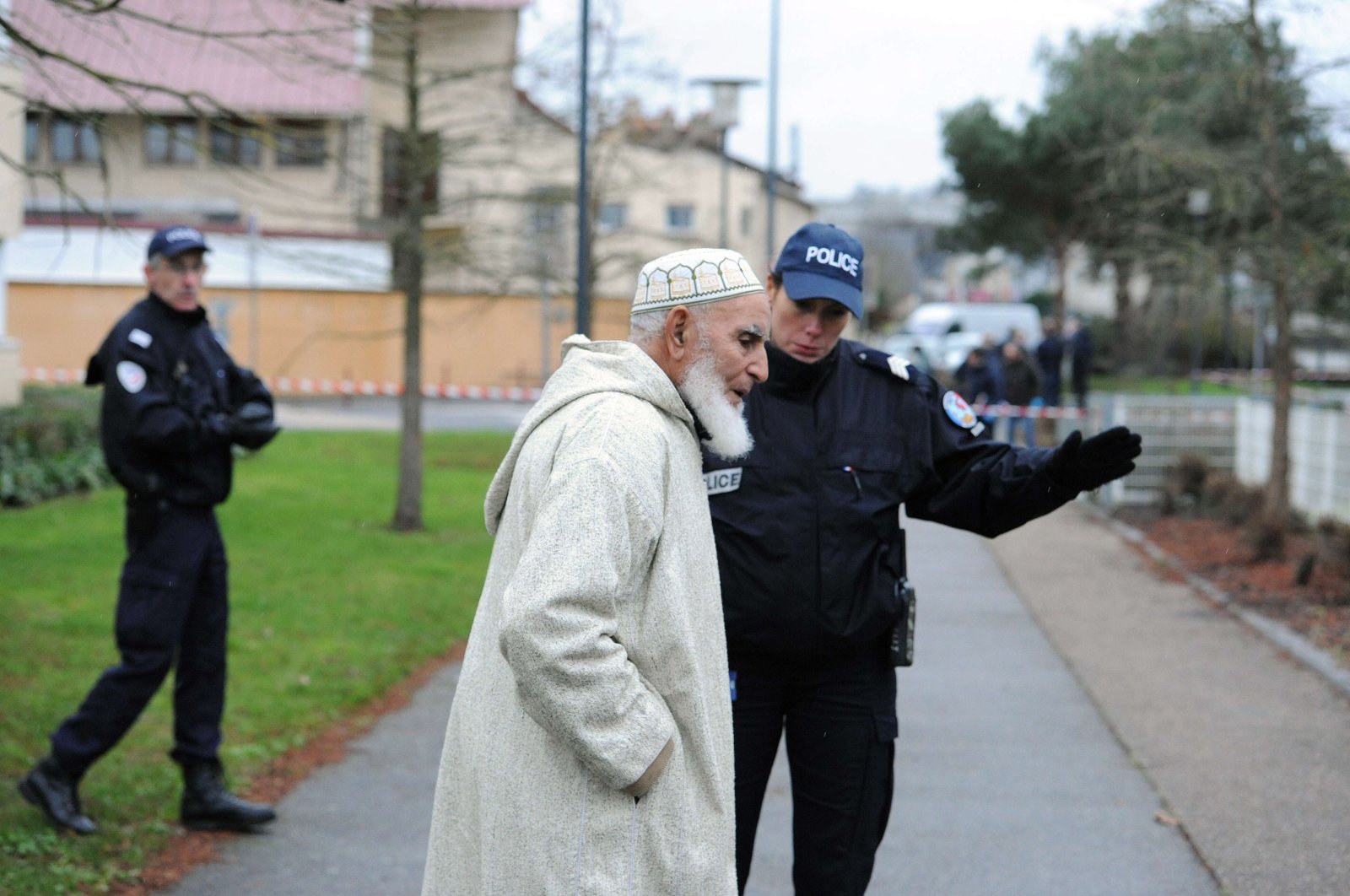 A police officer directs a man away as members of the French technical and scientific police work at the site near a mosque in the Sablons neighborhood of Le Mans, western France, Jan. 8, 2015. (AFP Photo)
by Anadolu Agency Jan 18, 2021 4:58 pm
RECOMMENDED

Speaking to Anadolu Agency (AA), the managing director of U.K.-based CAGE Advocacy Group, Muhammad Rabbani, a signatory to the complaint, said the French government's policies have led to the "securitization” of Muslim life and have shut down their places of worship, charities and NGOs.

"In the last few days, the French interior minister has closed down a further nine mosques. France is attempting to export its model of Islamophobia across the (European Union)," he said.

About the international community's response, Rabbani said that although the backlash in the aftermath of French weekly Charlie Hebdo printing offensive caricatures of Prophet Muhammed, followed by calls to boycott French products, did jolt the establishment in Paris, things have remained unchanged at the policy level. He said that France's treatment of Muslims has encouraged far-right populists in Europe.

"France is arguably the testing laboratory for European Islamophobia. It is, therefore, crucial that it is challenged robustly and in an organized fashion so it does not expand beyond the French borders," Rabbani added.

He noted that the international coalition of NGOs is also planning to take legal actions against the French government to ensure the rights of Muslims are protected. The group will highlight Paris' violation of international rights obligations.

Feroze Boda, the spokesperson of ​the Association of Muslim Professionals of South Africa (AMPSA), also told AA that French President Emmanuel Macron's policies are more than just hostile. "They are aimed at eradicating Islam under the guise of France's ideology of liberty and egalitarianism," he added. The AMPSA is also a signatory to the complaint.

"They unapologetically discriminate against Muslims among others, tarnishing the dignity of Prophet Muhammad under the disguise of free speech, attacking the wearing of the hijab, raiding Muslims homes, masjids and organizations and banning Muslim charities," Boda said.

Drawing parallels between Macron's policies to apartheid in South Africa, the AMPSA spokesperson said the experiences they struggled through will enable his organization to provide insight and expertise to the other international complainants.

According to the press statement, the NGOs have forensically identified and documented evidence of structural Islamophobia and discrimination against Muslims in France.

The statement said they have documents that chart the history of discrimination against Muslims since 1989 and find that France has violated several basic rights that are protected in legislations ratified by Paris.

"France exploited acts of political violence to entrench Islamophobia in policing and the judiciary. State policies designate religious practice as a sign of risk and is highly similar to failed Preventing and Countering Violent Extremism (CVE) models," said the statement.