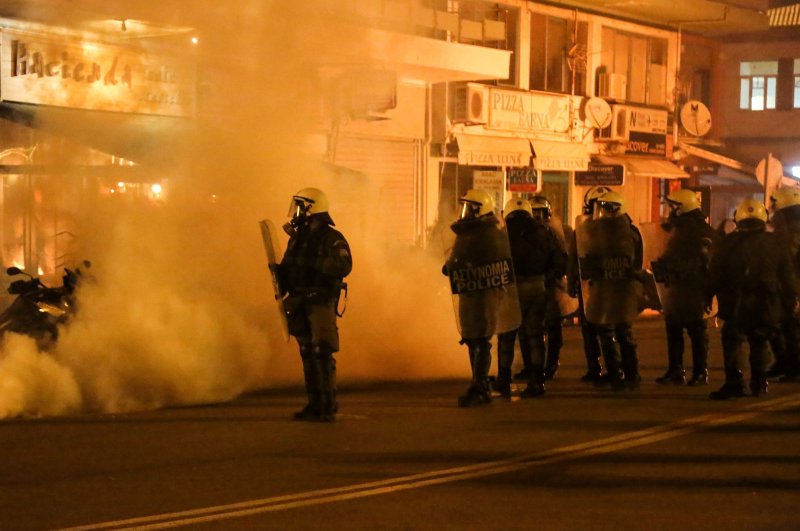 Riot police stand among tear gas during clashes with demonstrators protesting against the construction of a new controversial migrant camps at the port of Mytilene, Feb. 25, 2020. (AFP Photo)
by Associated Press Feb 25, 2020 12:55 pm
RECOMMENDED

Clashes broke out overnight on the Greek islands of Lesbos and Chios, where residents tried to prevent the arrival of riot police and excavating machines to be used to build new migrant detention camps.

Police fired tear gas to disperse the crowds that gathered early Tuesday to try and prevent police from disembarking from government-chartered ferries. On Lesbos, protesters set fire to trash bins and used municipal garbage trucks to try and block off the port area. Police on Chios also used tear gas and flash grenades. At least three people were treated in the hospital with breathing problems caused by the extensive use of tear gas, local officials said.

The government says it will move ahead with plans to build the new facilities and has promised to replace existing camps, where severe overcrowding has worsened in recent months. Many island residents, as well as local authorities vehemently argue that the migrants and asylum seekers should be moved to the Greek mainland.

The standoff between police and protesters continued later Tuesday near the areas where the new camps will be built, as police cordoned off areas around roadblocks set up over the past few days by demonstrators on the two islands.

Greece is the busiest entry point for illegal migration in the European Union with most arrivals occurring on eastern Greek islands from the nearby Turkish coast. Under a 2016 agreement backed and funded by the EU, the movement of migrants is restricted to those islands until their asylum claims are processed. Nearly 60,000 migrants and refugees arrived on Greek islands last year, almost double the number recorded in 2018, according to the U.N. Refugee Agency.