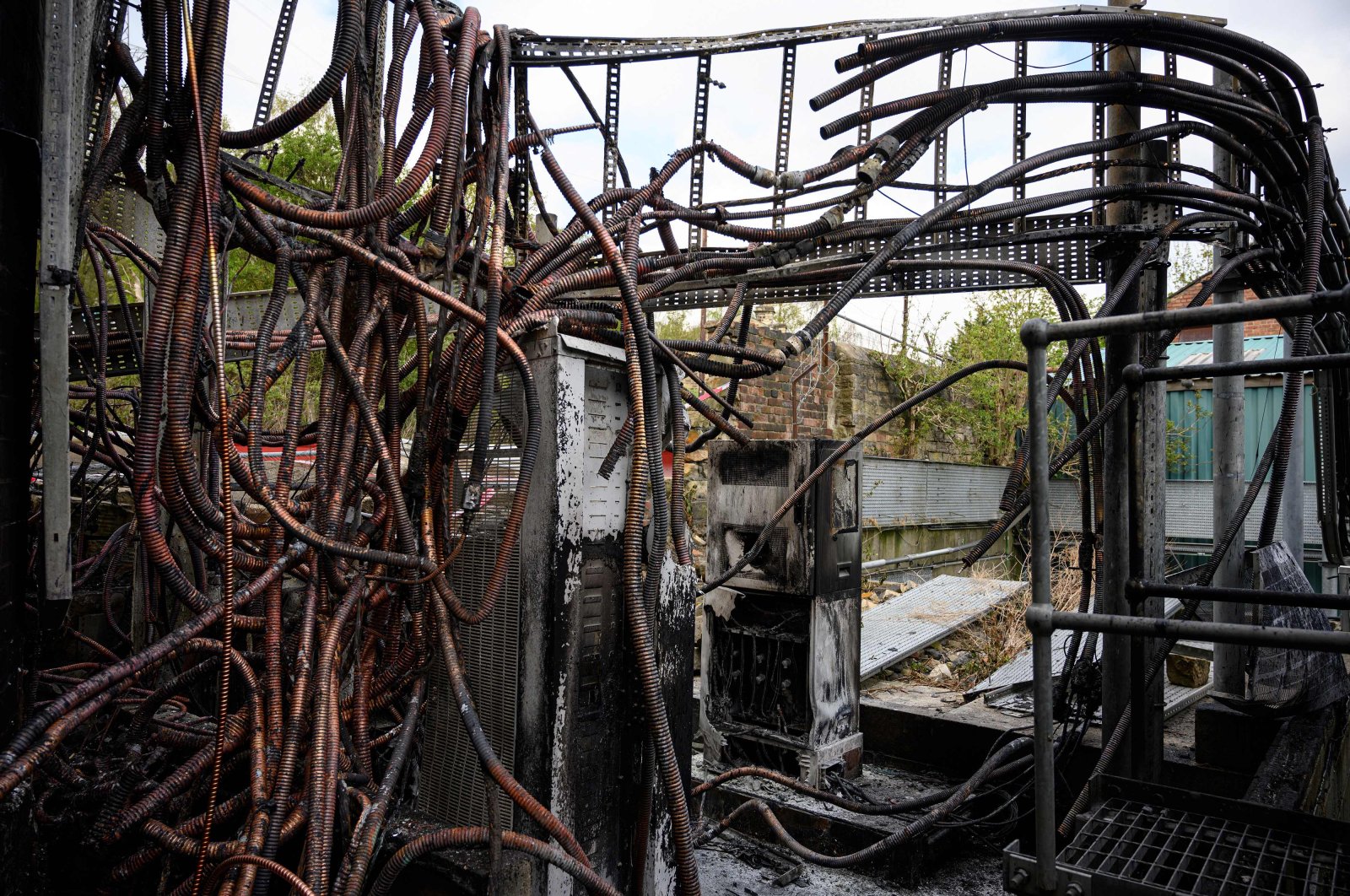 Damaged cabling and telecommunications equipment is pictured following a fire at a phone mast, attatched to the chimney at the converted Fearnleys Mill residential apartment block complex in Huddersfield, northern England, on April 17, 2020. It is not yet known what caused the mast, which is attached to a chimney at the Fearnleys Mill development, to go up in flames. But the fire comes after a number of mobile phone masts have been set on fire amid claims of a link between 5G and the novel coronavirus COVID-19. (AFP Photo)
by Associated Press Apr 21, 2020 11:21 am
RECOMMENDED

The CCTV footage from a Dutch business park shows a man in a black cap pouring the contents of a white container at the base of a cellular radio tower. Flames burst out as the man jogs back to his Toyota to flee into the evening.

It’s a scene that’s been repeated dozens of times in recent weeks in Europe, where officials are pushing back against conspiracy theories linking new 5G mobile networks and the coronavirus pandemic are fueling arson attacks on cell towers.

Popular beliefs and conspiracy theories that wireless communications pose a threat have long been around, but the global spread of the virus at the same time that countries were rolling out fifth-generation wireless technology has seen some of those false narratives amplified.

Officials in Europe and the U.S. are watching the situation closely, concerned that attacks will undermine vital telecommunications links at a time they’re most needed to deal with the pandemic.

“I’m absolutely outraged, absolutely disgusted, that people would be taking action against the very infrastructure that we need to respond to this health emergency,” Stephen Powis, medical director of the National Health Service in England, said in early April.

Some 50 fires targeting cell towers and other equipment have been reported in Britain this month, leading to three arrests. Telecom engineers have been abused on the job 80 times, according to trade group Mobile UK, making the U.K. the nucleus of the attacks. Photos and videos documenting the attacks are often overlaid with false commentary about COVID-19. Some 16 have been torched in the Netherlands, with attacks also reported in Ireland, Cyprus and Belgium.

Posts threatening to attack phone masts were receiving likes on Facebook. One post in an anti-vaccine group on April 12 shared a photo of a burned phone mast with the quote, “Nobody wants cancer & covid19. Stop trying to make it happen or every pole and mobile store will end up like this one.”

The trend received extra attention in Britain when a tower supplying voice and data traffic to a Birmingham field hospital treating coronavirus patients was among those targeted.

“It’s heart-rending enough that families cannot be there at the bedside of loved ones who are critically ill,” Nick Jeffery, CEO of wireless carrier Vodafone UK, said on LinkedIn. “It’s even more upsetting that even the small solace of a phone or video call may now be denied them because of the selfish actions of a few deluded conspiracy theorists.”

False narratives around 5G and the coronavirus have been shared hundreds of thousands of times on social media. They vary widely from claims that the coronavirus is a coverup for 5G deployment to those that say new 5G installations have created the virus.

“To be concerned that 5G is somehow driving the COVID-19 epidemic is just wrong,” Dr. Jonathan Samet, dean of the Colorado School of Public Health who chaired a World Health Organization committee that researched cell phone radiation and cancer. “I just don’t find any plausible way to link them.”

Susan Brinchman, director of the Center for Electrosmog Prevention, a nonprofit campaigning against “environmental electromagnetic pollution,” says that people have a right to be concerned about 5G and links to COVID-19. “The entire 5G infrastructure should be dismantled and turned off,” she said by email.

But there’s no evidence that wireless communications – whether 5G or earlier versions – harm the immune system, said Myrtill Simko, scientific director of SciProof International in Sweden, who has spent decades researching the matter.

The current wave of 5G theories dates back to January, when a Belgian doctor suggested a link to COVID-19. Older variations were circulating before that, mostly revolving around cellphone radiation causing cancer, spreading on Reddit forums, Facebook pages and YouTube channels. Even with daily wireless use among the vast majority of adults, the National Cancer Institute has not seen an increase in brain tumors.