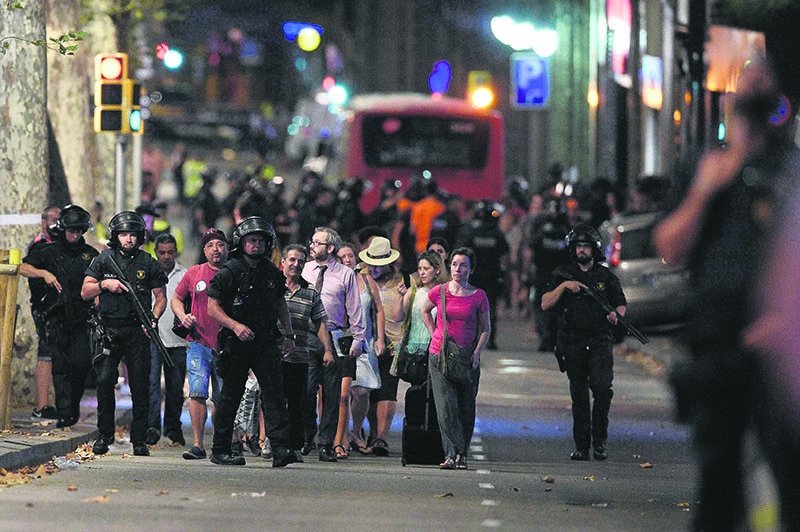 Catalan and Spanish politicians demand to avoid further suffering of 2017 terror attack victims after former senior officer in Spain’s National Police Corps, Jose Manuel Villarejo, claimed that the country’s secret service was behind the attacks in Barcelona and Cambrils in which 16 people died.

Villarejo who is facing trial for about 30 crimes, including money laundering and bribery, said the Spanish National Intelligence Center (CNI) organized the attacks – including the one in which a truck ran over pedestrians on La Rambla in Barcelona – to destabilize Catalonia before the independence referendum.

He added that this was “a serious mistake” on the part of former CNI director Feliz Sanz Roldan.

Saying that he continued to work with the CNI even after retirement until his arrest in November 2017, Villarejo underlined that “the aim was never to incite a terrorist attack, of course, but they provoked criminal organizations many times. They did this to give Catalonia the appearance of being at risk and to show that it needed the Spanish state.”

Following the allegations, Pere Aragones, the head of the autonomous administration government of Catalonia said he wanted Villarejo’s statements to be investigated.

“Aug. 17 was a barbarity that we will always remember. If Villarejo's words are true, an explanation must be made immediately,” he wrote via his social media account, as they “know very well how the state sewers work, so we demand that they be investigated in order to clarify the truth.”

“I have also asked the legal services of the Generalitat (Catalonia government) to study these statements and the relevant legal actions that can be taken. For the truth. For the victims, for the Catalans and for all those who are on the side of peace and democracy,” he added.

Cunillera said she has been "surprised" by Aragones’ decisions.

“This man (Villarejo) tries to entangle, sow shadows of suspicion without providing any evidence. He is testifying as a defendant; he has the right not to tell the truth. I do not understand that he is given credibility,” she said.

Cunillera asked for "respect" for the victims, saying: “That was terrible, it was investigated, there was a trial. Villarejo's claims have no material support, more than the desire to mess it up. Let's not play the game with him. Catalan society does not gain anything, it does not need tension," added the delegate.

Government Delegates in Spain represents the central government in the autonomous communities.

The mayor of Barcelona, Ada Colau, has also urged Villarejo to provide "clarifications and transparency" about the 17-A attacks, “above all to avoid further suffering for the victims.”

Alicia Romero, spokesperson for the Catalan Socialists, referred to Villarejo’s claims as a “conspiracy theory” from someone who “does not have to tell the truth during a trial and who only wants to make noise.”

In Cambrils, five suspected terrorists, who were caught in a police trap, were killed in the ensuing conflict.

The day before these events, in an explosion in a house in the Alcanar district in the south of Barcelona, two people including Abdelbaki Es Satty, a Moroccan citizen and an imam of Ripoll mosque in the Catalonia region, lost their lives and six people were injured.

Investigations carried out later found that the organizers of the terrorist attacks were the two people who died in the house – including the imam who was dubbed the mastermind behind the attacks and who later claimed to be a CNI informant.

Three Moroccan citizens – Said Ben Iazza, Driss Oukabir and Muhamed Houli – were sentenced to 8, 46 and 53 years in prison as a result of the trials.

On Thursday, six parties in Spain’s Congress have requested an inquiry commission be set up into Villarejo’s statements and are also seeking for a parliamentary committee to be convened on the issue.