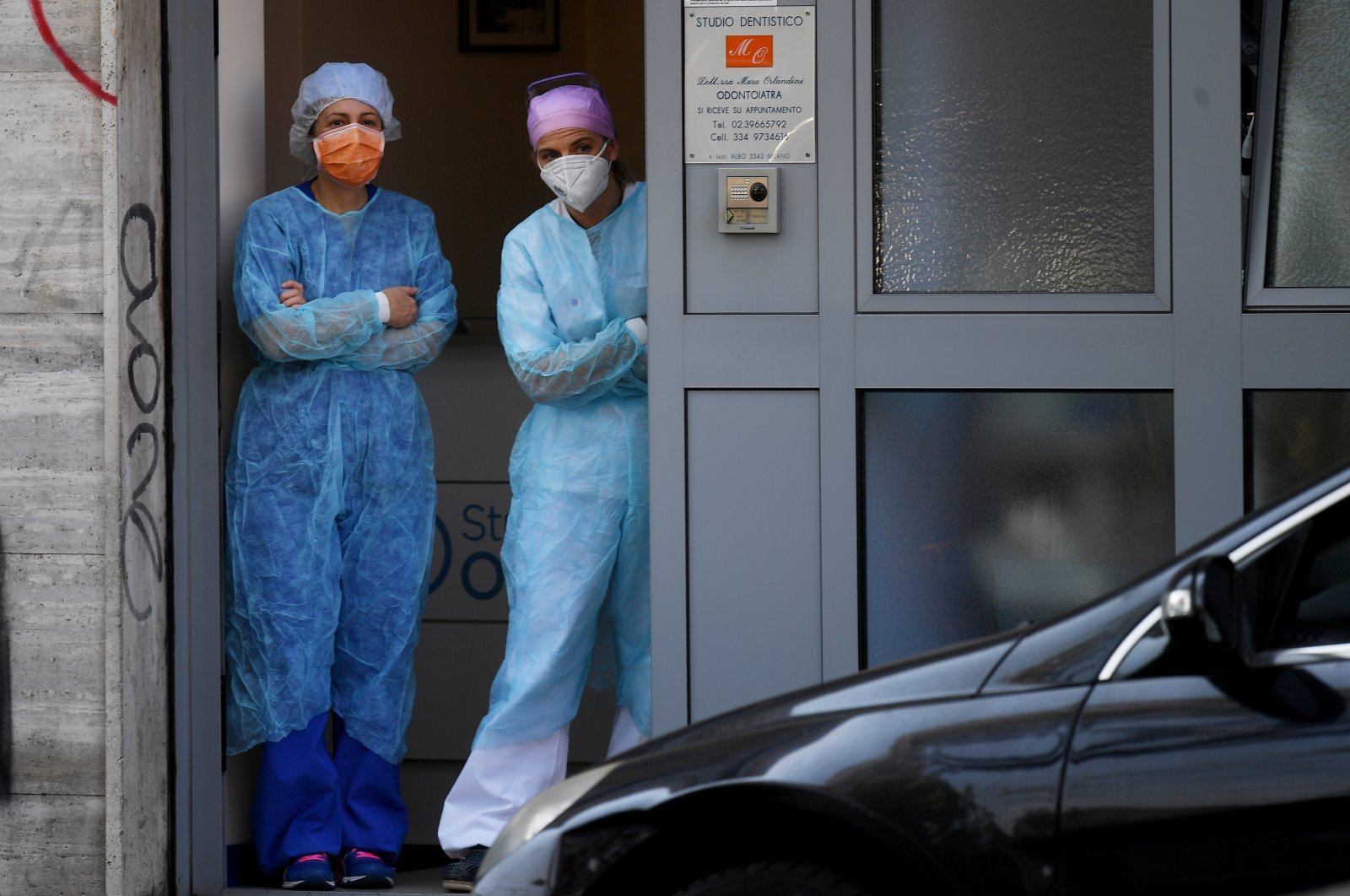 Dental staff look out of a doorway after a group who were putting red banners on memorial plaques dedicated to Italian partisans on Liberation Day following the outbreak of the coronavirus disease (COVID-19) in Milan, Italy, April 25, 2020. (Reuters Photo)
by Agencies Apr 25, 2020 3:28 pm
RECOMMENDED

The new coronavirus has killed more than 120,00 people in Europe, with more than three-quarters of those fatalities having occurred in Italy, France, Spain and Britain, according to an AFP tally made using official figures on Saturday.

Spain which is the third worst-hit country in the world after the United States and Italy recorded on Saturday a slight increase in daily virus toll with 378 people dying a day after the country registered its lowest number of fatalities in four weeks. The figure hiked the overall number of deaths in Spain to 22,902.

The overall number of infections in Spain has now passed 223,759, a figure that includes those shown to have developed antibodies against the virus. However, the county's health ministry has begun using only the number of cases confirmed by PCR (polymerase chain reaction) tests, or swab tests, giving a figure of 205,905 with a 2,944 of which were detected in the last 24 hours.

The move came as Spain passed an important landmark in its fight against the virus on Friday, with the daily number of recoveries outpacing the number of new infections for the first time since the start of the pandemic.

Spain has been ramping up the use of antibody tests which show whether a patient's immune system has developed defenses against the coronavirus, meaning they have been infected in the past.

On the other hand, Britain could hit the grim milestone of 20,000 COVID-19 deaths later on Saturday, when the daily count is added to the current toll of 19,506 people who tested positive for the new coronavirus and died in hospital.

As the death toll rises, the government is facing growing criticism over its response to the pandemic. It was slower to impose a lockdown than European peers and is struggling to raise its testing capacity, while medical staff continue to work with insufficient amounts of protective clothing.

Back in mid-March the government's chief scientific adviser said that keeping the death toll below 20,000 would be a "good outcome.”

Britain has the fifth-highest official coronavirus death toll in the world, after the United States, Italy, Spain and France. Scientists have said that the death rate will only start to decline quickly in another couple of weeks.

Russia on Saturday reported its highest single-day death toll since the start of the coronavirus outbreak in the country. The virus claimed the lives of 66 people over the past 24 hours, taking Russia’s death toll to 681.

According to the country's coronavirus crisis response center, the number of new coronavirus cases in Russia has risen by 5,966 over the past 24 hours, bringing its nationwide tally to 74,588.

According to Russia's chief sanitary officer Anna Popova, the spread of the virus in the country has happened mostly through 355 hard-hit areas.

A total of 2.7 million tests have been carried out in Russia to date and 168,000 people have been placed under medical surveillance, she added.

The number of coronavirus cases in Russia began rising sharply this month, although it had reported far fewer infections than many western European countries in the early stages of the outbreak.

Italy, with some 26,000 reported deaths, has suffered Europe’s highest death toll from COVID-19. In Lombardy, Italy’s most stricken region, prosecutors are investigating about two dozen care homes, including one in Milan where some 200 residents died.

The Italian government announced that it would start distributing free protective masks to nursing homes, many of which have been devastated by coronavirus infections and deaths.

Domenico Arcuri, the government’s commissioner for the pandemic, says doing so is a "gesture of solidarity and nearness and support to these places ever more at the epicenter of this great crisis.”

Arcuri says free masks also will be distributed to public officials, transport workers and police. Millions of Italians will be allowed to return to workplaces starting on May 4, when lockdown restrictions will be considerably eased.

Germany's confirmed coronavirus cases have increased by 2,055 to 152,438, data from the Robert Koch Institute (RKI) for infectious diseases showed on Saturday, marking a second day of deceleration after three days of rises in new infections.

On Friday, confirmed coronavirus cases had increased by 2,337. The reported death toll rose by 179 to 5,500, the tally showed on Saturday.

Even as Germany begins easing curbs on public life to halt contagion of the virus, authorities are busy ramping up their capacity to deal with a second wave of infections.

Chancellor Angela Merkel has repeatedly warned that Germany must not rest on its laurels, even if the infection rate has dropped, saying the country is still "on thin ice."

Worldwide, the new coronavirus has infected more than 2.8 million people and caused more than 197,000 deaths, according to a Johns Hopkins University count.