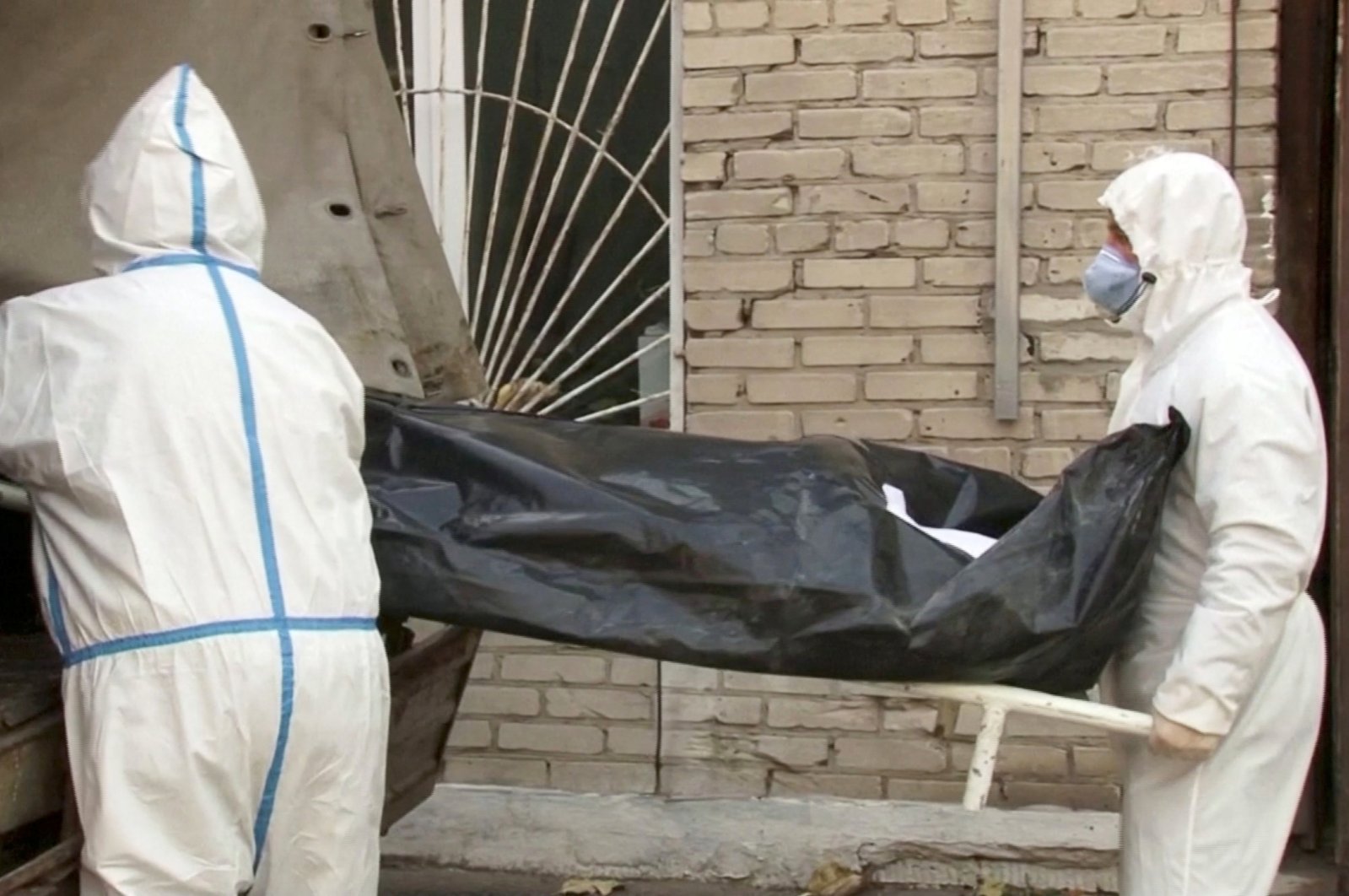 Medical specialists carry a stretcher while relocating a non-transparent bag, which presumably contains a human body, outside a hospital morgue, amid the outbreak of COVID-19 in Barnaul, Russia, in this still image taken from video released Oct. 22, 2020. (Tolk Channel /Handout/Reuters TV via Reuters)
by Compiled from Wire Services
Oct 26, 2020 4:55 pm

A video circulating on social media on Monday showing dozens of victims packed into a morgue in a hospital in Russia, reveals the lack of resources, violations of sanitary codes and inhumane treatment of patients battling the coronavirus.

A Russian health care worker recorded the scene from the corridor and dissection room of Novokuznetsk hospital in Siberia, where dozens of corpses lay on the floors – providing an inside look into Russian-state medical facilities.

"Corpses everywhere, corpses, corpses," the man commented as he walked through the hospital's corridor, disinfection station and shower room, revealing the filthy conditions.

The footage captured dozens of bodies in black bags littering the floor with at least one of the bodies simply covered with a blanket with the man's legs visible.

"We have a corridor, and it is full," the man said referring to the bodies of dozens of COVID-19 patients. "Corpses everywhere," he continued. "You can even stumble and fall. We literally walk over the heads of the dead."

The local authorities in the Kemerovo region verified the authenticity of the video released Monday, while the head of the local department of the ministry, Oleg Evsa, was fired shortly after the video went viral.

"Given the increase in the number of cases over the past three weeks, there is a rise in the number of deaths," the department said in a statement. "Due to a delay in the release of the bodies, about 50 bodies of the deceased were stored here," it added.

Russia's daily tally of new COVID-19 cases soared to a record high of 17,347 on Monday as the Kremlin warned the pandemic was beginning to inflict areas outside the capital Moscow on a greater scale.

Authorities say Russia has enough hospital beds and medication to tackle the second wave of COVID-19 but Kremlin spokesperson Dmitry Peskov said "extremely energetic" efforts from both federal and regional governments were now needed to cope with rising case numbers.

"The situation is quite serious," Peskov told reporters on a conference call. "The epidemic has stricken the regions, it has gone east of Moscow."

Russian media reports suggest some regions are struggling to withstand the pressure put on their health system.

In one indication of the crisis, Russia's health watchdog said it would launch an investigation following reports from local media outlet 161.ru in the southern city of Rostov-on-Don that several COVID-19 patients had died in the hospital as their oxygen supply ran out. A city official denied the report.

Authorities in the capital have opened temporary hospitals, ordered businesses to have at least 30% of staff working remotely and directed the city's sprawling metro system to turn away commuters with high body temperatures.

Russia in August became the first country to grant regulatory approval for a vaccine against COVID-19, doing so after less than two months of human testing, with large-scale trials underway. Regulators approved a second vaccine earlier this month.

In a televised meeting on Monday, parliament Speaker Vyacheslav Volodin told President Vladimir Putin that one in every five lawmakers in the 450-seat legislature currently has or has had COVID-19. He said that 38 lawmakers were currently hospitalized, one of whom was in intensive care.

With 1,531,224 infections, the massive country home to 145 million people has recorded the world's fourth-largest COVID-19 caseload – after the United States, India and Brazil.