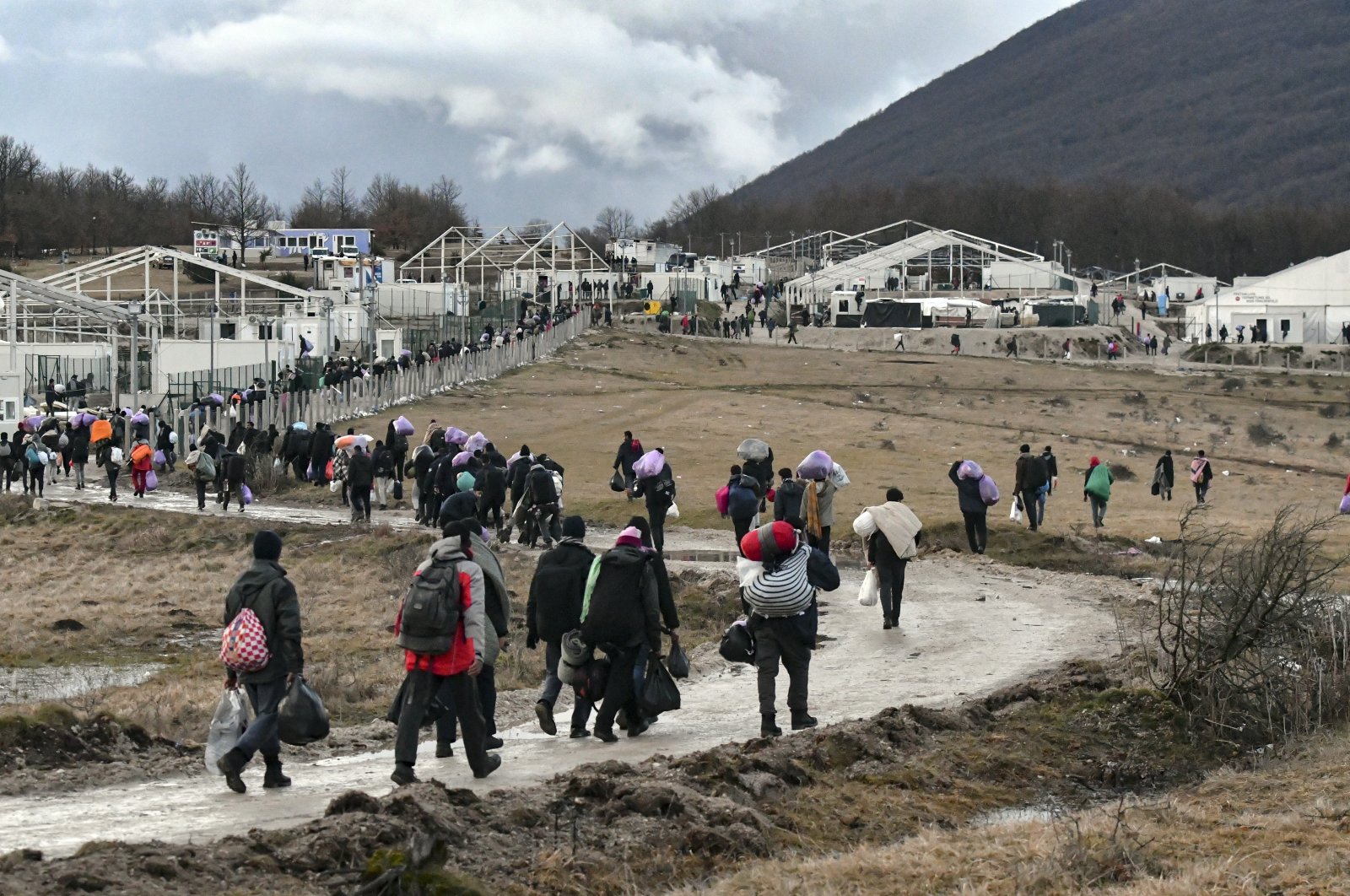 Migrants walk back to the Lipa camp after hundreds failed to be relocated from the burnt-out tent camp in the northwest of the country, outside Bihac, Bosnia-Herzegovina, Dec. 30, 2020. (AP Photo)
by Agencies Jan 04, 2021 10:38 am
RECOMMENDED

The European Union allocated an additional 3.5 million euros ($4.2 million) to Bosnia-Herzegovina on Sunday to provide better housing for the hundreds of migrants currently left without shelter in harsh, wintry weather.

More than 1,700 people in the canton of Una Sana lack proper shelter, European Commissioner for Foreign Affairs Josep Borrell and Civil Protection Commissioner Janez Lenarcic said Sunday in Brussels. Some 800 are living outdoors in the cold, including children. Borrell called the situation in Una Sana "completely unacceptable" and said that humane conditions should be guaranteed at all times, as reported by the Deutsche Presse-Agentur (dpa).

The EU's humanitarian aid would provide people with the most basic necessities, he said, adding that longer-term solutions were urgently needed. Borrell urged the authorities not to leave people in the cold and without access to washing facilities in the middle of a global pandemic.

"The situation in Una Sana canton is unacceptable. Winter-proof accommodations are a prerequisite for humane living conditions, which need to be ensured at all times," he said, according to remarks carried by Agence France-Presse (AFP). "Local authorities need to make existing facilities available and provide a temporary solution until Lipa camp is rebuilt into a permanent facility."

Fire engulfed the Lipa migrant center in northwestern Bosnia-Herzegovina on Dec. 23. There were no casualties from the blaze, but much of the infrastructure was destroyed. The incident deepened a crisis over where to house thousands of migrants, as Bosnian authorities have failed to find new accommodation for the newly homeless.

Pro Asyl, an organization representing migrants, said the EU had failed the migrants in Bosnia-Herzegovina and called for the opening of the nearby border to Croatia, a member of the EU.

The migrants have been sleeping rough since the camp was evacuated by the International Organization for Migration (IOM). During the eviction, some people set fire to tents and containers. A fire destroyed much of the Lipa camp near the town of Bihac that already was harshly criticized by international officials and aid groups as being inadequate for housing refugees and migrants. Around 1,000 people are stuck in the cold with no facilities or heat, eating only meager food parcels provided by aid groups.

The migrants were supposed to be transferred to housing in a former army barracks, but local protests prevented the move. Police believe the blaze was started by migrants to protest the withdrawal of the IOM, which had been running the camp. The IOM had left, complaining that the accommodation – opened in April but without power or running water – was not fit to house people during the winter.

Bosnia-Herzegovina lies on the so-called Balkans route used by tens of thousands of migrants heading toward Western Europe since 2018 as they flee war and poverty in the Middle East, Asia and Africa. The country currently hosts some 8,500 migrants. Migrants mostly flock to Bosnia-Herzegovina's northwestern corner, which borders EU member Croatia, from where they hope to move toward wealthier European countries. But many have reported violent pushbacks by Croatian border forces as well as hostility from Bosnian residents.

The European Commission, which finances the running of several migrant camps in Bosnia-Herzegovina, has called for another center in Bihac to be reopened, but local and regional officials oppose the idea. In an attempt to ease the migrant crisis, the Bosnian government has deployed the army to set up tents on the site of the burned-down reception center, but the migrants appear unwilling to use them as they too are unheated and without water. In a sign of the growing protest, the migrants refused the meal distributed Friday and Saturday by the Red Cross and a local charity, a Red Cross official told FTV public television.