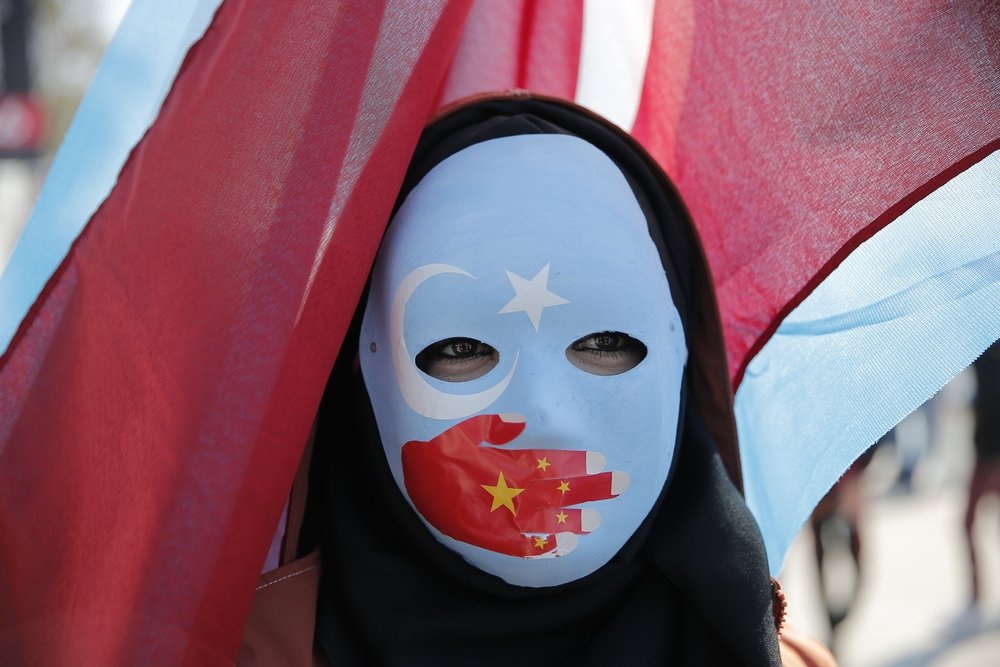 An ethnic Uyghur person is seen during a protest against China near the Chinese Consulate, Istanbul, Turkey, Dec. 15, 2019. (Shutterstock Photo)
by Agencies Mar 22, 2021 2:00 pm
RECOMMENDED

The European Union imposed sanctions on Monday on four Chinese officials, including a top security director, for human rights abuses in Xinjiang, the first sanctions against Beijing since an arms embargo in 1989 following the Tiananmen Square crackdown.

Accused of mass detentions of Muslim Uyghur in northwestern China, those targeted with sanctions included Chen Mingguo, the director of the Xinjiang Public Security Bureau. The EU said Chen was responsible for "serious human rights violations."

In its Official Journal, the EU accused Chen of "arbitrary detentions and degrading treatment inflicted upon Uighurs and people from other Muslim ethnic minorities, as well as systematic violations of their freedom of religion or belief".

China denies any human rights abuses in Xinjiang and says its camps provide vocational training and are needed to fight extremism. While mainly symbolic, the sanctions mark a significant hardening in the EU's policy towards China, which Brussels long regarded as a benign trading partner but now views as a systematic abuser of basic rights and freedoms.

They are also likely to inflame tensions between Brussels and Beijing. The EU had not sanctioned China since it imposed an arms embargo in 1989 following the Tiananmen Square pro-democracy crackdown. The arms embargo is still in place.

All 27 EU governments agreed to the punitive measures, but Hungary's foreign minister, Peter Szijjarto, called them "harmful" and "pointless", reflecting the bloc's divisions on how to deal with China's rise and to protect business interests.

China is the EU's second-largest trading partner after the United States and Beijing is both a big market and a major investor which has courted poorer and central European states.

"This is a very important step which shows how committed we are," Slovak Foreign Minister Ivan Korcok said, according to remarks carried by Agence France-Presse (AFP).

The mechanism – designed to make it easier for the bloc to target rights abusers – was launched this month with sanctions on four Russian officials over the jailing of Kremlin critic Alexei Navalny. Diplomats said the fresh sanctions on Russia will target individuals behind abuses in the country's Chechnya region, which is ruled with an iron-fist by Kremlin loyalist Ramzan Kadyrov.

"Commander-in-Chief Min Aung Hlaing has been directly involved in and responsible for decision making concerning state functions and is therefore responsible for undermining democracy and the rule of law in Myanmar," the listing said.

"What we see there in terms of excesses of violence is absolutely unacceptable," German Foreign Minister Heiko Maas said.

"That is why we will not be able to avoid imposing sanctions."

Myanmar has been in turmoil since the military ousted civilian leader Aung San Suu Kyi on Feb. 1, 2021, triggering a mass uprising that security forces have sought to crush with a campaign of violence and fear.

Diplomats have said businesses tied to the military will likely be placed under sanctions in the coming weeks.